The horror, the horror: 'The Act of Killing' makes history 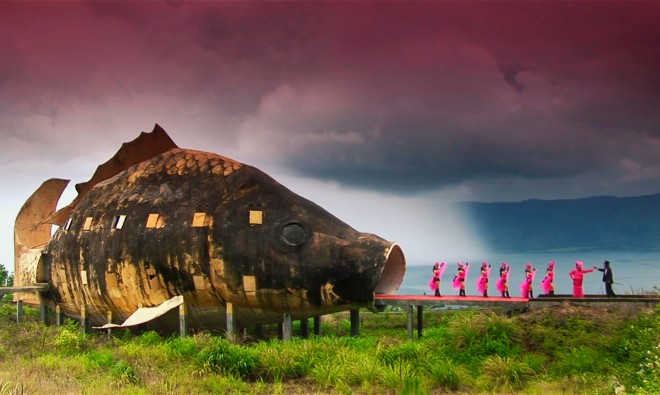 A scene from 'The Act of Killing'

Walking around TIFF with a head full of important thoughts about important movies—from The Master to Cloud Atlas—I was trying to carve out some time to write about them today when I decided to squeeze in another movie: The Act of Killing. It’s one of the most buzzed about films at TIFF and now I know why. It’s hard to believe what I’ve seen and I’m still reeling from it. To say it’s a documentary about the death squads responsible for the genocide of over one million Indonesians from 1965-66 does not begin to describe it. A film within a film, it shows the leaders of the death squads, a merry cabal of gangsters, proudly re-enacting their crimes for the camera, boasting of killing and torture, and staging surreal costume pageants to celebrate their historic role as mass murderers. After seeing a preview of the movie, Werner Herzog said, “I have not seen a film as powerful, surreal and frightening in at least a decade.” I can’t imagine what Herzog could have seen over a decade ago that would trump it, but then he also said: “It is unprecedented in the history of cinema.”

Herzog and Errol Morris both signed on as executive producers  after The Act of Killing was made. As two of the world’s leading documentary makers, they clearly recognized that this documentary goes where no film has gone before—even if it does echo the theme of Standard Operating Procedure, Morris’s investigation into the performance-art torture of Iraqi prisoners by American soldiers at Abu Ghraib. In this case, we’re not talking souvenir snapshots. The killers at the heart of the story throw themselves into re-staging their crimes with breathtaking bravado on a grand scale. They’re led by Anwar Congo, a gangster who graduated from scalping movie tickets to leading anti-communist death squads in the 1960s. He brags of killing hundreds of so-called communists with his his own hands. “At first we beat them to death and there was too much blood,” he says, as he proceeds to demonstrate his preferred tool of mass execution—a wire garotte torqued with a wooden handle. 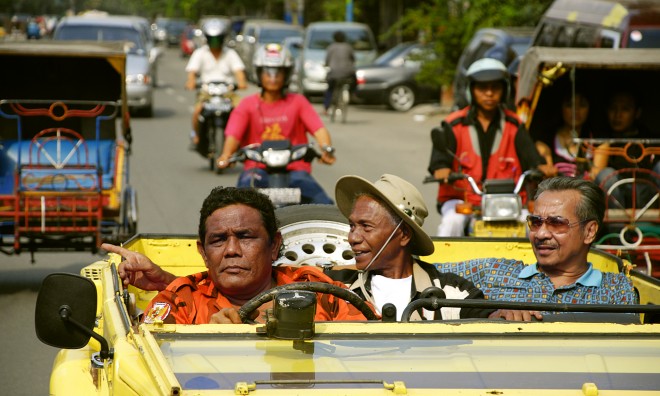 A scene from 'The Act of Killing', featuring Anwar Congo (right)

Citing names like Pacino, Brando and John Wayne, Anwar and his cronies says they were inspired by Hollywood gangster films and westerns, the ones they sold tickets to on the black market. To stage their re-enactments, they mimic myriad genres ranging from film noir to Bollywood-like musical extravaganzas. They get into costume, slather on make-up, and engage in elaborate discussions how best to play their roles.  One boasts about raping 14-year-old girls. In one scene, they re-enact the rape and killing of women and children and burn down a village, then wonder why the women and children are still weeping after the cameras stop rolling.  Shockingly, these killers are folk heroes in their own country, still tied to the current government by powerful and popular paramilitary organizations. They have never been brought to justice, and we see their exploits celebrated on an Indonesian TV show by a smiling female host.

The Act of Killing is beyond belief. It’s as if Hitler and his accomplices survived then got together to re-enact their favorite scenes from the Holocaust on camera, for a documentary crew intent on exposing the horror. Their triumphant reminiscence is the direct opposite of the apartheid confessions invited by South Africa’s Truth and Reconciliation Commission. Healing and penance in this case are not even on the agenda.  Nevertheless, the men do slip into debates about the wisdom of revealing so much truth as they romance their mythology. When one is asked if he’s not worried about being hauled before the International Court at the Hague on charges of war crimes, he shrugs and says he would welcome the fame it would bring. However, Anwar Congo, the film’s central character, is more circumspect. He’s gradually drawn into some soul-searching over the arc of the narrative.  He’s quietly charismatic. He tries to put the past behind him with alcohol, drugs, and dancing. But as he portrays torture and murder victims in the re-enactments with painstaking detail, trying to imagine their pain, the weight of buried guilt gradually begins to crack his polished veneer. By the end, we start to feel empathy for him, which is perhaps the most disturbing thing of all.

The Act of Killing is directed by Joshua Oppenheimer, a Texan-born, Harvard-educated filmmaker, who has spent a decade researching and shooting Indonesia. He began by interviewing the victims, which he found was a far more dangerous endeavor than talking to the killers. The film was co-directed by Christine Cynn, who worked with him on The Globalization Tapes (2003), and by an Indonesian director who is listed as Anonymous for his own safety.

We wonder if films can change the world. This one is at least bound to have a devastating impact.