The king of coke: Why 'Narcos' triumphs over 'Sicario'

They're both takes on South American drug cartels, but 'Narcos' proves that you need time to tell a story this complex 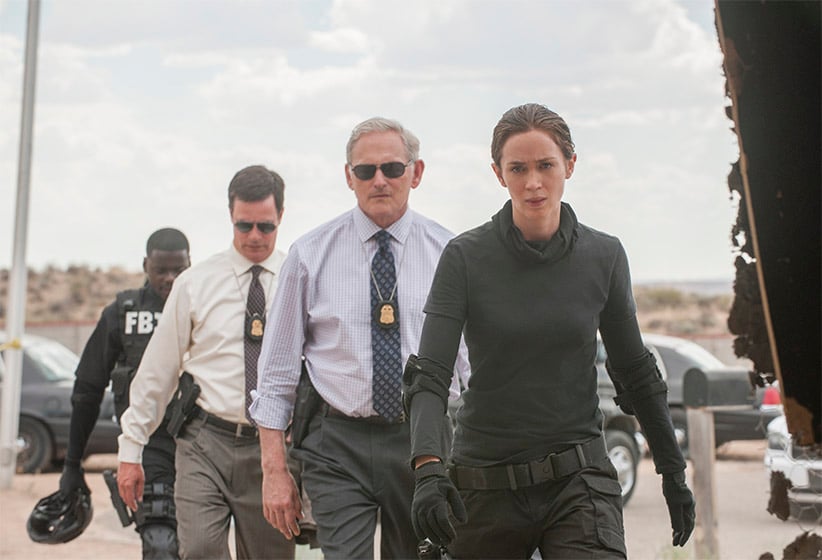 A still from the movie Sicario (Richard Foreman, Jr. SMPSP)

Sicario begins by defining its title (the Spanish word for “hitman”) then opens onto a flawless beige suburban enclave in Arizona. It looks like any other middle-American flat-screen toting community … but wait! Suddenly, a cluster of black-clad FBI agents creep into the shot like beetles, marring the desert landscape. It’s an image we’ve seen a thousand times before, the petit bourgeoisie corrupted from within. Yes, yes, we know, that house may look normal, but there are bad men in there, the kind who bury bodies behind drywall.

Narcos begins a little differently. The Netflix series based on the life of drug lord Pablo Escobar starts by defining magical realism—“what happens when a highly detailed, realistic setting is invaded by something too strange to believe.” Then comes a foggy opening onto the night sparkle of 1970s Columbia powered by a growling baritone of a voiceover like the engine of the plane that soon comes into focus: “Nowadays the U.S. government can listen to anything you say. They know where you are, they know who you’re talking to, and trust me, they know who you’re f–king.” Therein lies the difference between these two takes on South American drug cartels: where one is a heavy-handed action-packed cliché, the other is less easily defined, more thoughtful, gritty.

French-Canadian filmmaker Denis Villeneuve’s numerous accolades for Sicario have more or less kept pace with its body count. Star Emily Blunt has been lauded for her role as Kate Macer, an FBI agent tagging along with a cocksure freelance task force as they attempt to take down a Mexican drug cartel. Blunt gives good face for the modest task she is given, which is to principally watch in disbelief as leader Matt (Josh Brolin) yippy-kay-yays all over the FBI rule book. Benicio Del Toro’s brooding Colombian sicario, Alejandro (Matt’s right hand man), a lone wolf who has his own secret vendetta to tend to, offers a more penetrating performance (he did play Pablo Escobar onscreen last year). Unfortunately he is virtually undone by his dialogue, dropping truisms like, “Nothing will make sense to your American ears, and you will doubt everything we do,” or, as he drives into the bullet-pocked bloodbath that is Juarez, the clanger: “Welcome to Juarez.”

This is Sons of Anarchy actor Taylor Sheridan’s first script and you can tell. He attempts to delve into moral relativism, throwing in a bleeding-heart backstory for a corrupt Mexican cop, and tacking a picture-perfect family onto a cartel kahuna who announces he learned his bad behaviour from the “good guys.” But none of the characters are onscreen long enough to register (a couple of details can’t turn Michael Bay into Terrence Mallick). Even Sicario’s violence cuts only skin deep. According to The Wrap, the film’s brutality caused walkouts, yet those scenes are filmed so dramatically—Villeneuve focuses a little too long on the bodies in the Arizona house—that it’s hard not to see the strings.

After Matt makes the cynical admission that he and his team are simply trying to establish order in the drug trade—the ultimate blame lies on the snorters, he claims—Sicario leaves you wondering why it was even made. There is no insight to be found here, a fact Sheridan himself appears to have no problem admitting. “Does legalizing drugs solve anything, or just create entirely new problems?” he asked the New York Times earlier this month. “The only thing that would solve it is people who do drugs recognizing the harm they cause others and deciding not to do them. And I think that’s almost a utopian fantasy. But the answer? I don’t have the foggiest idea.” 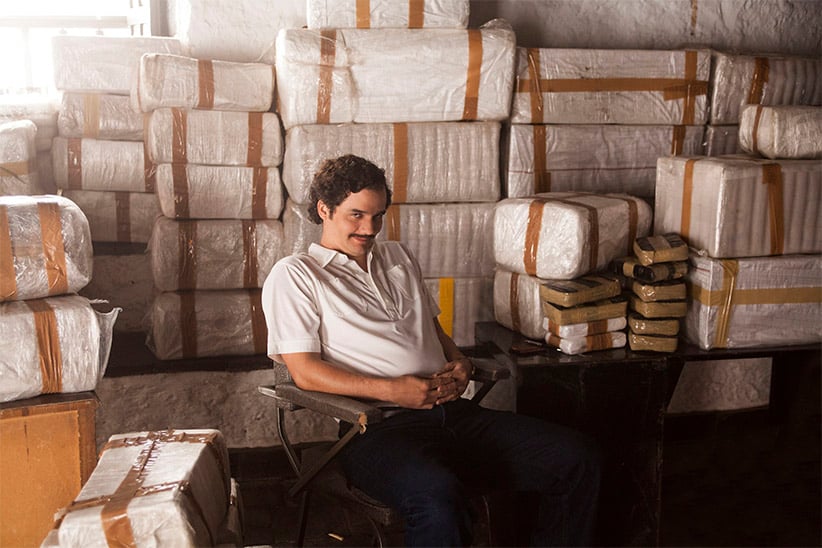 In one gruesome image shared by Sicario and Narcos, a row of bloodied bodies hang from above, victims of the drug wars; but where Sicario offers a simple drive-by shooting, so to speak, presenting the naked corpses as one horrific backdrop among many, Narcos pauses. In the Netflix series, Colombian coke king Pablo Escobar (Wagner Moura), performing literal gallows humour, orders his men to move the bodies, hung by ropes, up and down to find the right position for a snapshot. A smile plays on his lips as he surveys his handiwork, like a proud dad taking a family portrait.

It’s this sort of contradiction that provides the backbone for the entire show. “I am not a rich person,” says Escobar, who was once estimated by Forbes to be worth $3 billion. “I am a poor person with money.” Narcos is the story of a farmer’s son who sowed Colombia’s violent reputation in the ’70s and ’80s by hooking everyone around him to cocaine. But it is also the story of the men who were addicted to catching him, particularly Steve Murphy (Boyd Holbrook), a DEA agent who, along with his partner, Javier Pena (Pedro Pascal), uses any means necessary—including convincing President Ronald Reagan that coke and Communism are linked—to get him. The show’s creator, Brazilian filmmaker Jose Padilha, who made his name in 2002 with the documentary Bus 174, interviewed Escobar’s contemporaries to form an authentic portrayal of the Colombian Robin Hood who destroyed his home and then rebuilt the ruins in his image.

Narcos, which debuted on Netflix at the end of August and has already been renewed, illustrates why you need time to tell a tale as complex as this one. It also shows that you need to reach beyond the set pieces of Hollywood and its good and bad dichotomies. “Listen, the bad guys, the good guys, they have something in common: they are human beings,” Padilha told theGuardian last month. “Human beings who, depending on the context, may drop their ethical stance to get the job done.” There’s the answer Sheridan was looking for.