The little old lady from Manitoba 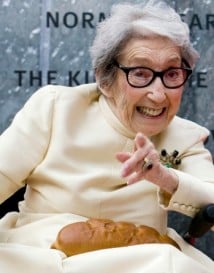 Canadian actress Frances Bay, grandma to the stars, died the age of 92 in a Los Angeles hospital on Friday, Sept. 23, 2011. The following profile was published on January 23, 2008, prior to her receiving a star on Canada’s Walk of Fame.

Chances are you’ve never heard of Frances Bay. Like so many character actors, she has a face that’s instantly recognizable yet hard to place. She’s best known from Seinfeld — as the peeved lady who bought the bakery’s last loaf of marble rye bread only to have Jerry Seinfeld snatch it out of her hands. Gaining cult status as “the marble rye lady,” Bay popped up in two more Seinfeld episodes, including the series finale. You might also remember her as Fonzie’s grandma in Happy Days. Or Adam Sandler’s grandma in Happy Gilmore. Or Kyle MacLachlan’s aunt in David Lynch’s Blue Velvet — staring at a robin perched on a windowsill with an insect in its beak and uttering the film’s penultimate line of dialogue: “I don’t see how they could do that. I could never eat a bug.”

Frances Bay, who turned 89 this week, must be the oldest Canadian actress still working in Hollywood. She has appeared in some 30 movies and over 100 TV shows, even though she didn’t launch her screen career until she was 60. And she has the distinction of gracing the final episodes of two other classic sitcoms — Happy Days and Who’s the Boss. Now friends and family of the actress, who grew up in Dauphin, Man. (pop. 8,000), are petitioning to cement her reputation with a star on Canada’s Walk of Fame in Toronto — alongside names like Jim Carrey, Mike Myers, and Shania Twain. An online campaign (www.petitiononline.com/franny) has drawn almost 3,000 signatures, and glowing letters of support from Henry Winkler (Fonzie), Monty Hall (who asked that her star sit next to his), and Seinfeld, who conceded that she “stole the scene as the ‘Rye Lady.’ ”

All this is especially poignant now that Bay does her acting in a wheelchair — her right leg was amputated below the knee in 2002 after she was hit by a 17-year-old driver while crossing the street. She was on her way to a bakery, looking for a special Thanksgiving dessert.

The daughter of Anna and Max Goffman — Russian Jews who immigrated to Canada to escape czarist tyranny — Bay was born in Manville, Alta. But the family soon moved to Dauphin, where her parents ran a clothing store. (She had a brother, Erving Goffman, who became an eminent sociologist.) Bay began acting in school plays, often cast as a princess, a role that stuck as she pursued a career onstage in Winnipeg and on CBC Radio. After a string of princess parts, Bay recalls grumbling to the director, “When am I going to play more character roles?” His reply: “My dear, you are a princess now and you will stay a princess as long as you can.”

After studying with acting legend Uta Hagen in New York, Bay became enthralled with Winnipeg’s leftist New Theatre Group in the 1930s. “It was when labour unions were struggling to be recognized,” she says. “I wasn’t a labour sort of person. I’m a middle-class Jewish gal. But this theatre was so exciting. I’m a socialist today, if that means anything.” Bay went on to host a CBC radio show during the Second World War and with her dulcet voice she became known as the sweetheart of Canadian troops abroad.

After the war, Bay put her career on hold to have a family. Her husband, Chuck Bay, was her childhood sweetheart. She vowed to marry him at nine, when she first glimpsed him across a playground in Dauphin, but waited until she was 26. Chuck was a clothing executive with a Harvard M.B.A., and a job that took them to the United States. “It was the pre-feminist period when, at 6 o’clock, dinner should be on the table,” recalls Bay. “I had a child, and I was devoted to my husband’s career. They’re both gone now.”

Her son died tragically at 23. (Chuck died in 2002, and she lost her leg five months later.) After her son’s death, Bay resumed her career, playing her first TV role in Kojak, then making her film debut in Foul Play (1978). In films from Twins to The Grifters, and TV shows from ER to Anne of Avonlea — for which she won a Gemini — she found her niche as Everygrandma, the eccentric old lady with a twinkle in her eye. David Lynch couldn’t get enough of her: after Blue Velvet, he cast her in Wild at Heart, Twin Peaks, and its movie spinoff, Fire Walk With Me.

In an effusive letter to the Walk of Fame selection committee, Winkler called Bay “an inspiration,” explaining that, as “my make-believe grandmother on Happy Days, she was in truth my only grandmother.” His own grandparents had died in Nazi Germany. Sadly, Frances Bay never had a chance to have her own grandchildren, but Dauphin’s princess became grandma to the stars.