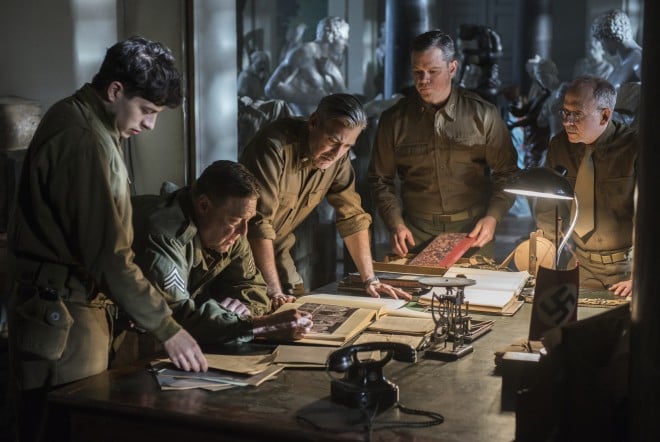 During the run-up to the Academy Award nominations, it was puzzling to learn that The Monuments Men was left out of the running. On paper it looked like supreme Oscar fodder. A star-studded war epic directed by George Clooney,  it’s based on true story with Spielbergian sweep—the tale of a civilian band of American art experts who join the Army to embark on a treasure hunt for European masterpieces stolen by the Nazis. Like Argo, it’s a kind of historical heist movie, the tale of an unlikely crew trying to outwit an evil empire, with a tone that blithely skitters between comedy and drama. Inglourious Basterds also comes to mind, but these recruits are glorious nice guys, a bunch of middle-aged intellectuals who can’t shoot straight. Fish out of water on the front lines in the final inning of the Second World War, they aren’t trying to kill Nazis, just steal back their loot.

The Academy wasn’t given a chance to snub The Monuments Men. Sony Pictures made it ineligible for consideration by postponing the movie’s release to the first week of February. Clearly someone did the math and decided it just wasn’t good enough to compete in what turned out to be an exceptionally crowded field of strong contenders.

Now that I’ve seen it, I can understand why: The Monuments Men is a far less monumental picture than it pretends to be. It has major flaws. Of course, so did Argo. But it was at least zippy entertainment. Clooney has made a bloated picture with an Oscar-scale grandiosity and earnest tone that are no longer fashionable. This year’s Argos are American Hustle and The Wolf of Wall Street, profane, smart-ass caper films about amoral con men. Clooney has crafted an earnest, faux-vintage war movie about impeccable heroes, a jaunty adventure ennobling a few good men who may not be saving the world, but are saving the priceless legacy of Western culture from monsters and Philistines.

Their story is extraordinary, and well-worth honouring, a Mission Impossible tale of men who uncover, literally, buried treasure—thousands of stolen art works—with the goal of repatriating them to their rightful owners. But sadly, Clooney has built a rather a clunky monument. Ranging across a slack, episodic narrative, it’s rife with platitudes about the importance of the mission, and too many speeches that address the great moral quandry that surrounds it: is any piece of art worth dying for?

The answer, of course, is yes. Duh. We are reminded more than once that the cultural legacy of Western civilization is what the Allies were fighting for. (But I must admit, in a scene where a charred frame of an incinerated Picasso canvas is reverently pulled from a pile of paintings burned by the Nazis during their scorched-art retreat, I couldn’t help thinking, c’mon, do we really need more Picassos?)

Amid gusts of high-minded sentiment, the movie tries to get by on charm. It’s as if every character has received a K-ration of Clooney’s jocular warmth, along with packs of cigarettes that they must smoke as often as possible, because that’s what soldiers do in a war, even soldiers who don’t smoke. The film offers plenty of enjoyable moments along its meandering journey, thanks to an overqualified cast of jokers who gamely compete for our affection—including Matt Damon, Bill Murray, John Goodman, Jean Dujardin and Bob Balaban. But these are movie moments, adding up to a stacked deck of cameos. That’s clear right from an early scene where mission leader Frank Stokes (Clooney) tracks down his old pal James Granger (Damon), who’s hanging off a scaffold, restoring some art, like an upside-down Michelangelo. As Stokes recruits Granger with a nudge and a wink, their characters are upstaged by the smug conceit of movie-star pals sharing a bit of bromance, as if George just dropped by to cast Matt to star in another Oceans sequel.

Amid this boys’ club, Cate Blanchett delivers in a crisp, immaculate performance as Claire Simone, a French museum curator-turned-spy who holds the secret to the stolen art. Pushing the envelope of camp, Blanchett conjures a severe Marlene Dietrich mystique reminiscent of her role opposite Clooney in The Good German. This time Damon gets to be the dance partner in her seductive intrigue. But as she turns up the heat, offering the American a a one-night taste of Parisian romance, their chemistry is cut painfully short to protect the virtue of Damon’s character as a married man. Needless to say, in Clooney’s wholesome rendering of history, none of the Monuments Men ever get to be anything less than men of monumental virtue. For their part, the villains could not be more villainous. And just when you think there’s nothing worse than a Nazi SS art thief with a death camp command on his resume, along come the Russians, who are determined to seize the plundered art as spoils of war.

This is the fifth feature Clooney has directed. His previous efforts have been uneven—Good Night and Good Luck was the best—but here, for the first time, he seems to be making a movie in a style that feels almost deliberately inauthentic. You feel you’re in the hands of a filmmaker who finally got to make the kind of war movie he loved as a child. Also for the first time, Clooney falls prey to the Warren Beatty syndrome of framing his own performance too glamourously. His hair and make-up are distractingly perfect; it’s as if he’s trying to give us Clark Gable 2.0. Meanwhile, the film’s retro style is hammered home by the oppressive detail of Alexandre Desplat’s jaunty orchestral score, a retro extravaganza that sounds like it might break into the Colonel Bogey March any moment.

In its over-zealous mission to keep us entertained, The Monuments Men at least succeeds in that regard for much of the time. It rolls along as an amiable confection. It’s very watchable. The lamentable irony is that a movie designed to honour men who risked their lives for art falls so short in unearthing the emotional truth that makes art art.