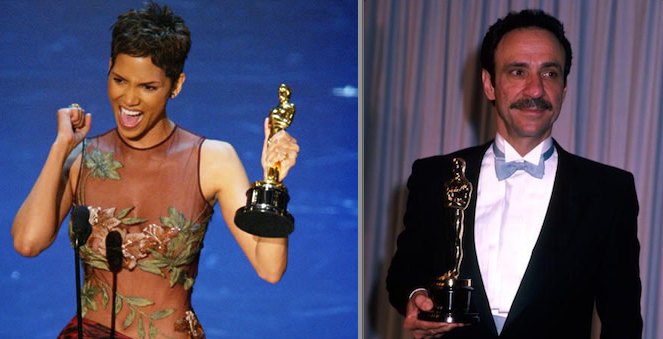 This Sunday, Jennifer Lawrence will cap off a stunning year, when she’ll likely be handed the Best Actress Oscar for her firecracker performance in Silver Linings Playbook, at L.A’s Shrine auditorium. Though Jessica Chastain has an outside shot at nabbing the award from Lawrence’s clutches, the 23 year-old actress is everything to everyone these days, and her official coronation as “America’s Sweetheart” come Oscar night feels all but inevitable. So with pre-Oscar-winning Lawrence already Hollywood’s current It-girl, J-Law the Oscar winner should become the biggest star on the planet, right?

Not so fast, says Halle Berry, whose new film The Call looks like yet another in a long line of Berry thrillers destined for bargain bin purgatory. And to think, it was only a decade ago that she stood triumphant on Oscar’s stage, and tearfully accepted her own award for Best Actress for her searing turn in Monster’s Ball. It was a massive breakthrough for the star, who never lacked in wattage, but often stood on the sidelines as the juiciest roles went to her more esteemed colleagues. Berry’s win should have catapulted her into an elite class of actress, the kind that gets to decide when she works, where she works, and who she works with. Then came Gothika, and Catwoman, and Perfect Stranger, a series of head-scratching misfires that all but sunk whatever credibility she had earned with her Oscar win. Was Berry just a victim of toxic career advice and questionable decision making? Or had the dreaded “Oscar jinx” claimed its latest victim?

Notions of a so-called curse plaguing Oscar winners have been floating around Hollywood since the late thirties, when German actress Luise Rainer won consecutive Best Actress awards, and then vanished. Since then, many actors have succumbed to similar fates, most notably F. Murray Abraham, who after winning Best Actor for his portrayal of the devious composer Salieri in Milos Forman’s Amadeus, spent the rest of his career toiling away in obscure schlock. In fact, Abraham’s career has been so unremarkable, some insiders have even dubbed the curse “F. Murray Abraham Syndrome.” Abraham himself, doesn’t seem to mind, saying famously, “The Oscar is the single most important event of my career. I have dined with kings, shared equal billing with my idols, lectured at Harvard and Columbia. If this is a jinx, I’ll take two.”

So is Abraham justified in not feeling cheated out of a potentially legendary career? And what is the appropriate ripple effect an Oscar should have on an actor’s oeuvre, anyway? Some feel that once the title of “Academy Award winner” is chained to their name, the eternal quest for validation that defines being an actor in Hollywood, will come to an end. After winning Best Actress in 1979 for Norma Rae, an unimpressed Sally Field said, “What does the Academy Award mean? I don’t think it means much of anything.” But five years later when she won her second acting prize, that aloofness gave way to a genuine feeling of inadequacy. The 38 year-old actress took the stage to accept her award–for her performance in Places in the Heart–and shouted infamously, “You like me! You really like me!”, proving that in showbiz, not even the holy grail can cure self doubt. That’s especially true when it comes to women, whose appeal is always at the mercy of father time. Hollywood’s aversion to ageing may be the biggest reason actresses seem most vulnerable to the Oscar jinx, with Gwyneth Paltrow, Nicole Kidman, Reese Witherspoon, and Helen Hunt’s molten careers all cooling off considerably after their wins. But age isn’t the only road block to post-Oscar glory, as actors like Adrien Brody, Forest Whitaker, and perhaps most notoriously Cuba Gooding Jr., have all failed to capitalize on their Oscar wins.

There’s also the misconception that an Oscar equals a bigger payday, which might explain why actors tend to follow up wins with glossy dreck (please see Charlize Theron and Aeon Flux). But if a star was unable to open a film prior to winning an Oscar, a little gold statuette on their mantle is unlikely to change anything, especially now, with the entire notion of “the movie star” in rapid decay. So if winning an Oscar is rarely the career boon that actors think it is, why all the excessive pageantry? Why all the transparent gladhandling, and the endless speculation that makes the Oscar race seem like a year long derby? The rabid public interest can be chocked up to our obsession with any kind of competition, and the higher the stakes, the bigger the audience. But for actors, the Oscar provides little certainty in a career filled with the opposite.

Jennifer Lawrence for one, certainly doesn’t need an Oscar to help her career, which is already wrapped in teflon thanks to The Hunger Games franchise. If she does win, she’ll be allowed into the exclusive club of past winners, but Lawrence is already the toast of Hollywood, so acceptance can’t be the real appeal. So really, Jennifer Lawrence’s Oscar win will be mostly meaningless. She’ll still be considered the industry’s saviour without or without her little bald friend by her side. And yet, when she wins on Sunday night, there will be tears, and like clockwork, she’ll say it’s the greatest day of her life, and in a just one week, we’ll start from the beginning, and do it all over again.