The passions and possibilities of autism

A pair of tender new documentaries highlight how people with autism are so much more than society's misconceptions, ascending into wizardry or falling into tragedy 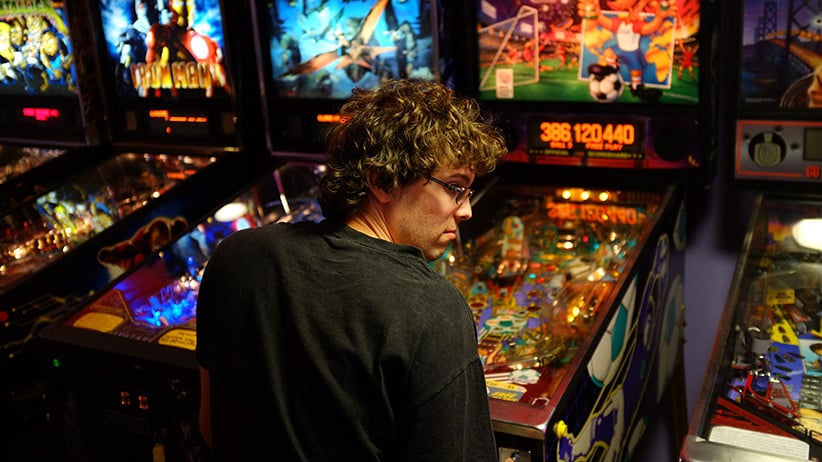 Robert Gagno was diagnosed with autism at the age of three. Two years later, before he could even talk, at a burger joint near his family’s home in Burnaby, B.C., Gagno discovered pinball. Now 27, he is the sixth-top-ranked player in the world. Last month, he won the world pinball championships in Pittsburgh. The relationship between Gagno’s prowess at the machines and his life on the autism spectrum is, ostensibly anyway, the subject of the film Wizard Mode, which makes its world premiere on May 2 at Toronto’s Hot Docs festival.

And yet it’s about so much more than that. In Gagno, a gangly, perpetually smiling young man capable of delivering astonishing soliloquies of self-examination, the filmmakers, Vancouver’s Jeff Lee Petry and Nathan Drillot, have found a deeply sympathetic protagonist. As he negotiates the pressures of pinball competition—after a loss, his hands often shoot up into the air, as stiff and rigid as the flippers inside the machine—Gagno must also grapple with his autism, which among other things limits his capacity to understand social cues.

His condition, as tenderly observed in this documentary, only serves to make visible what in other adolescent males remains fastidiously concealed: the turmoil involved in accepting the duties and uncertainties of manhood.

Gagno, who did not speak until the age of seven, and who must learn the subtleties of human interaction almost by rote, is seen here travelling alone for the first time, seeking camaraderie and friendship (and sometimes getting spurned), preparing for job interviews, finding work. Long suspicious of physical touch, the film finds him a new convert to hugging—other pinball players, mainly—which he learns to do properly through laborious study and effort. (Research tells him there are eight varieties of hugs, including his favourite—the bear hug.)

At one point in the feature-length documentary, Petry and Drillot’s first, Gagno contemplates fatherhood, noting, though, that that “would also be up to the person I’m dating.”

What follows are Gagno’s reflections on finding love, and it is a litany of fears. “I was thinking about wanting to date quite often in my head,” he says. “Except I didn’t have confidence that I can do it. Like, could I succeed? Could I show professional behaviour? Do I come off as someone, like, odd, to them? I have kissed a girl before, when I was 12. Like, when I was a kid in elementary school. I wonder if I’ll get that opportunity again in life.”

That appetite for companionship, and his conscientious concern that he be worthy of it, must owe something to Gagno’s upbringing. His progress unfolds under the loving, anxious scrutiny of his father and mother, Maurizio and Kathy, and Wizard Mode is equally a carefully rendered, moving portrait of parental devotion.

When Kathy suggests that Gagno prepare a list of three things to tell prospective employers about himself during job interviews, and he immediately replies, “that I like being affectionate,” Kathy’s kind, careful dissuasion—“friendly” might be better, she says—is a powerful reminder both of how far Gagno has come from his wordless childhood, and of the nudging, encouraging roles Kathy and Maurizio have played all along in getting him here.

Maurizio has even adopted pinball as a passion of his own: he repairs the Gagnos’ large collection of machines, and acts as his son’s coach at tournaments, boosting his confidence with pep talks so quiet and unassuming, it’s as though he’s erasing himself before the camera. It is an uncommonly candid glimpse of the selflessness of fatherhood. 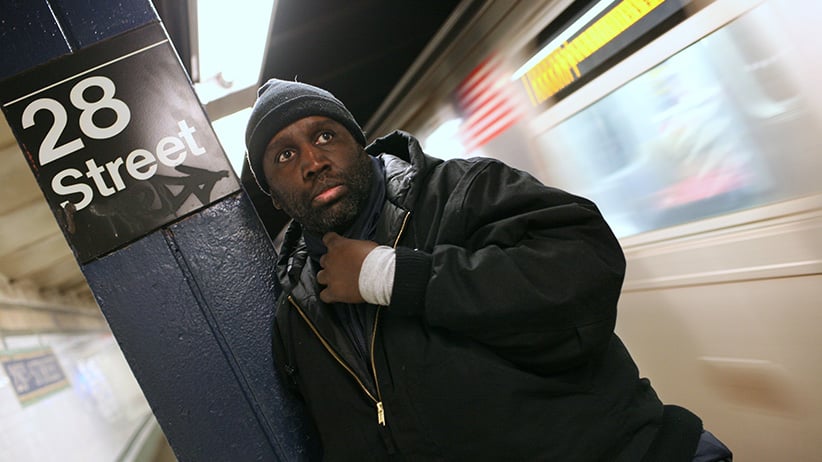 Darius McCollum poses by a passing train in New York. (Off the Rails)

The circumstances here differ, heart-wrenchingly, from those of Darius McCollum, the subject of Off the Rails, the second film premiering at this year’s Hot Docs profiling a man on the autism spectrum. McCollum has since the early 1980s enjoyed worldwide notoriety for driving subway trains and buses while impersonating a New York City Transit Authority employee. He has done so repeatedly and convincingly, and has as a result served over half his adult life in prison.

McCollum, a fast-talking, charismatic man now in his early 50s, was first drawn to the subway as a teen, and his enthusiasm, according to the film, helped endear him to transit personnel. A self-confessed “mama’s boy” who says his remote father rarely made time for him, he found himself invited into the largely male world of the subway system, and that club of men helped set his standard for manhood.

He began wearing the transit authority uniform, speaking transit lingo, and collecting other accoutrements of the job. As Off the Rails tells it, he drove his first train after a conductor, anxious to keep his appointment for a daytime tryst with a female transit employee, asked him to take over. McCollum drove flawlessly, but got caught after a passenger saw a child at the controls.

His arrest thrust young McCollum into the vortex of New York’s lively media—he remains a favourite subject of news reports—and Off the Rails makes the point that his bus-and-train fixation is as much about the attention it garners him as it is about the thrill of operating the big machines.

Neither is the allure of the controls and tunnels entirely chaste. After his marriage collapsed, McCollum’s wife complained of his many disappearances, which she believed were evidence of an extramarital affair. “These other women are the trains,” McCollum told her. The union ended after she demanded that he choose between her and the subway.

Perhaps wisely, the documentary’s director, Adam Irving (a Toronto native now based in Los Angeles) wastes little time clarifying the obvious—that while McCollum’s Asperger’s, a high-functioning form of autism, may help make him exceptional, his years of languishing in U.S. prisons make him, as an African-American, distressingly ordinary.

In so many other ways, McCollum bucks the stereotypes. “Whenever I tell people about my movie, I purposefully will not mention that Darius is black—until someone says, ‘Oh, what does Darius look like?” Irving tells Maclean’s. “When I say, ‘Oh, he’s a six-foot-tall, 250-lb. black guy,’ they say, ‘Wow, I was not picturing that!’ That’s interesting to me—when you describe a train buff with Asperger’s, they don’t think of someone who looks like Darius.”

McCollum grew up in inner-city New York at a time when autism remained even less well understood than now. “Darius was not formally diagnosed until his 30s, when it was far too late to do anything,” Irving says. “It’s likely that, in a nice neighbourhood, in a good school system, his condition would have been recognized.”

Irving here might well be describing the subject of Wizard Mode—Gagno the pinball champ from East Van—and it is true that in Gagno we glimpse a future that’s now beyond McCollum’s reach. Where McCollum’s fixation has landed him in prison—he is there now, awaiting yet another trial—Gagno’s has been harnessed to become an outlet for excellence.

Wizard Mode, the more accomplished of the two films, derives its power from the intimacy it achieves with Gagno, and its clever, restrained use of pinball imagery. If the doc flirts at times with hipster pandering—pinball is, after all, a pursuit of the skinny-jeaned, and the talented Canadian indie darling Mac DeMarco makes a cameo—it is saved by its earnest attention to the film’s main character.

“Stupid Robert—stupid, stupid Robert,” Gagno tells himself after a competition loss, and just when the film risks exposing its protagonist too much, we hear him say: “You know what I think it is? It’s my temper problem.” Gagno is investigating his own weakness at the flippers, and whatever else he is up against in life, he is striving to improve. “I think I’m in a little bit of pain right now,” he tells the camera elsewhere. “If I don’t qualify, I think I’ll be a little bit sad.”

That undercurrent of work helps the filmmakers free Gagno from the misconceptions many continue to hold about autism. “There’s a bit of a myth that’s developed that somehow Robert is like a savant, that his autism is somehow connected to his ability to play such phenomenal pinball,” co-director Drillot tells Maclean’s. “Jeff and I never really bought that. The more time we spent with Robert, the more we realized the reason why he’s phenomenal at pinball is because he puts in a lot of time and practice and has done so since the age of five.”

Though its title is a nod to The Who’s rock opera Tommy (Petry and Drillot even got the band’s permission to remake “Pinball Wizard”), “wizard mode” is also a technical term in pinball, denoting a concluding stage of play in which expert players can amass large stacks of points. In Wizard Mode, it is a metaphor, developed alongside other pinball references—unlucky losses, a chaos of silver balls, flashing lights—suggesting the trajectory of life. Gagno emerges here not just as a pinball magician, but as a worthy hero.