The real shocker of ‘Fifty Shades’

Never in cinematic romance has there been a leading man so utterly humourless, writes Emma Teitel 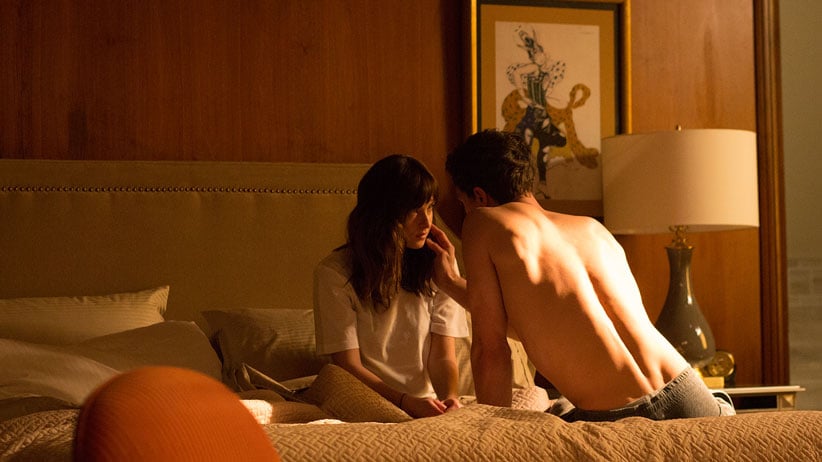 There’s a scene early on in Fifty Shades of Grey, the film adaptation of E.L. James’s hugely successful 2011 erotic romance novel, in which Anastasia Steele (Dakota Johnson), a bookish virgin on a girls’ night out, drunk-dials her rich, handsome suitor, Christian Grey (Jamie Dornan), from a nightclub bathroom, and chides him playfully for being so inscrutable. Johnson, the 25-year-old daughter of Melanie Griffith, is fantastic: Anastasia is sexy, charming and hilarious as she slurs her words, trying to take the inimitable Grey down a notch. But he won’t flinch. We see him at the other end of the line, pacing in his fancy hotel room—walking, brooding, walking, brooding, ascertaining Anastasia’s location—but he never softens; he never smiles. It is an odd thing to watch a romantic film in a theatre full of people and suddenly realize the only person in sight not disarmed by the leading lady is the leading man.

Since time immemorial, from Clark Gable in Gone with the Wind to Chris Noth on Sex and the City—even Augustus Waters in The Fault in Our Stars—leading men have been making leading ladies laugh. They aren’t comedians, nor should they be, but they are clever. And Christian Grey, though a 27-year-old “mega-industrialist tycoon,” is decidedly not.

Anastasia Steele knows this. “Christian Grey is not known for his sense of humour,” James writes from Anastasia’s perspective in her novel, after the protagonist, a shiftless English-lit grad, has begun shacking up with Grey in his “red room of pain,” where the two partake in all manner of BDSM behaviour. But there is enough in James’s prose to suggest at least a mild playfulness on Grey’s part. It’s easy to imagine, when reading the book, a smirk on Christian’s face as he “picks at the strap” of Anastasia’s camisole and suggests that she wear “silks and satins” instead. He even offers to take her shopping.

The same playfulness doesn’t come across in the film. Dornan as Grey is steely-eyed and squinty, a look that is probably intended to convey sexiness, but expresses mostly constipation. It’s hard to tell if this is Dornan’s fault, as he gives a fine performance on the BBC Two series, The Fall (though he does play a serial killer). The film’s director, Sam Taylor-Johnson, who was behind the critically acclaimed 2009 John Lennon biopic Nowhere Boy, was an unusual and exciting choice for Fifty Shades. Yet she seems to be under the impression that bondage and fun are mutually exclusive, as she’s fashioned in Dornan a Grey even duller than his counterpart in the book. To say he is the strong, silent type would be a wild understatement. He is a cipher: an automaton with a sex drive and about as much charisma as Spock on Star Trek, minus the occasional deadpan quips. (In fact, he makes Spock look like Jackie Mason).

This renders the film’s highly anticipated sex scenes lukewarm. When a couple shares no light or awkward moments together, their flights of passion are anti-climactic. All intensity all the time is not only exhausting; it’s boring. Tension isn’t made out of thin air: It builds at a snail’s pace.