The rise of drones in movie-making

Drone shots are to this generation of filmmakers what close-ups, split screens and 3D once were. Is that really a good thing? 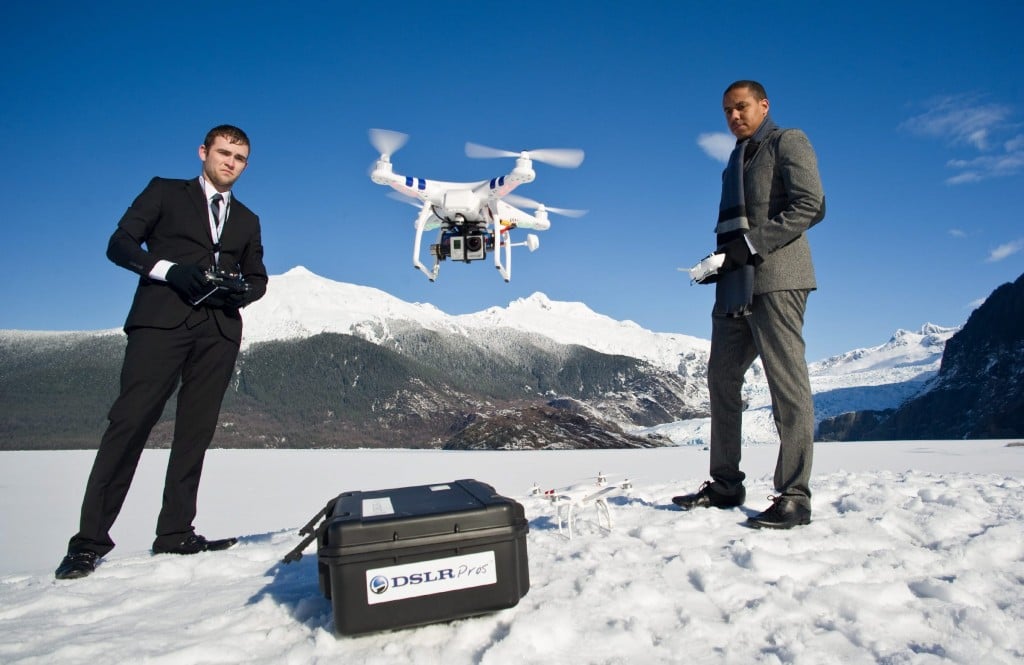 Chris Carson, left, and Lion El Aton of Firefight Films demonstrate their DJI Phantom drone quadcopter at Mendenhall Lake in Juneau, Alaska, on Thursday, March 20, 2014. They have been using the unit to film the glacier and an ice cave this winter. (AP Photo/Juneau Empire, Michael Penn)

At the 68th Cannes Film Festival back in May, an interesting footnote in cinema trivia was written: Jacques Audiard’s ﬁery refugee drama Dheepan became the ﬁrst Palme d’Or winner to include a scene captured from the chassis of an unmanned drone. In a ﬁlm industry where drones are replacing helicopters on sets around the world, winning the most prestigious prize in cinema is enough of a milestone to signal the emergence of a new ﬁlmmaking trend. Drone cinematography, for better or for worse, is taking off.

There is only one drone shot in Dheepan, but it arrives at a rather curious moment, because the sequence begins with the camera situated at a traditional height, as Audiard’s camera horizontally tracks Dheepan (Antonythasan Jesuthasan), a Sri Lankan civil war refugee, as he walks to his job as a custodian at a suburban slum in the outskirts of Paris. Suddenly, after an ascending thrum in the musical score, the frame unhinges from its earthbound axis and takes off at a 45-degree angle, pushing past trees and ﬂying over the apartment block that Dheepan takes care of. From above we take in the dilapidation, and the vantage point puts a grandiose and sweeping end to a relatively sleepy ﬁrst act.

This shot is not the reason Dheepan took home the Palme. Rather, the ﬁlm earned its laurels through formidable performances and a powerful narrative arc, one that elegantly portrays an immigrant story through Audiard’s humanist lens, a sensitivity that many of his ﬁlms feature. The ﬁlm also exhibits some eye-catching traditional cinematography—a midnight reverie, a lonely elephant in the jungles of Sri Lanka, a combustible conclusion—and these impressive sequences ﬁnesse a simplicity that the drone betrays. Sometimes, less is more.

Commercial cinema has been playing with drones for years. In 2012’s Skyfall, during a motorbike chase on the rooftops of Istanbul’s Grand Bazaar, the ﬁlm moves between brief, frenetic shots and those taken from a drone ﬂying over James Bond and the man he’s pursuing. In terms of aesthetic, the question is: what is director Sam Mendes accomplishing by incorporating drone angles in this scene? The answer: not a lot, because the drone shots look like an afterthought. And when your production has a budget approaching $200 million, what is a drone doing that a helicopter could not do better?

Mendes’s Hollywood drone counterpart—and fellow Best Picture Oscar-winner—is Martin Scorsese, who used a drone for some establishing shots for 2013’s The Wolf of Wall Street, a ﬁlm whose subject mirrors the sort of visual grandeur that aerial photography encompasses. Scorsese has a drone ﬂy over a massive oceanside party and it all seems like the opening to a music video—the point, perhaps; the drone shot is in line with the opulence of the overall production.

But Skyfall and The Wolf of Wall Street and other ﬁlm spectacles using drones, like Michael Bay’s Transformers 4: Age of Extinction, were shot before September 2014, when the U.S. Federal Aviation Administration broadly approved the use of drones on American ﬁlm productions in U.S. airspace. Very few exemptions had been made prior to the FAA’s approval, and most cinematographers interested in shooting with a drone had to do so in foreign countries. As the ﬁrst anniversary of this ruling approaches, established, indie and hobbyist filmmakers alike are finally using drones on sets—or in parks—at home.

Their use is best observed in the YouTube and short-ﬁlm world, a competitive playing ﬁeld where would-be auteurs graduating from ﬁlm schools across North America are trying their best to stand out. “[Drones] are obviously becoming more of a tool for filmmakers, especially young filmmakers, who can be much more savvy about emerging tech,” says Jason Anderson, ﬁlm critic and co-programmer of the Toronto International Film Festival’s Short Cuts programme. “It is a kind of value-added thing if they can get their hands on one. Five years ago, it was more about the GoPro, but now it’s more about drones.”

But Anderson is critical of the typical drone shot, arguing that “there’s always the temptation to throw bells and whistles at things when they’re not particularly well-developed or particularly interesting on their own merits.” Anderson saw hundreds of submissions in the selection process for TIFF this year, and from the ﬁlms with drone shots he watched, he says that they “had limited application beyond adding ﬂash to shorts that felt like calling-card items by American students.”

Back in June, TIFF’s artistic director Cameron Bailey tweeted: “Screening & screening & screening. All I know for sure is that drone shots are to now what the zoom was to the 70s.” Bailey’s observation isn’t necessarily critical—it’s just that in terms of prevalence, drone cinematography will soon be ubiquitous, and ﬁlm programmers are taking note.

This aerial robot invasion isn’t surprising. For the past 100 years, technologies developed for aerial warfare have found use in commercial cinema—Fred Waller, for example, the inventor of the widescreen Cinerama format, ﬁrst used his innovation to train Second World War airplane gunners.

“Throughout ﬁlm history, filmmakers have always adopted new ways of seeing. That’s what cinema is about, and it’s what technologies are often about,” says ﬁlm historian Brian Jacobson, assistant professor at the University of Toronto’s Cinema Studies Institute. “Of course filmmakers are going to embrace any technology that will make that possible.” The possibilities are there for many people to embrace them: for a decent drone, filmmakers need only spend in the ballpark of $3,000 to figuratively and literally raise their cinematic potential, making the drone the definition of a cheap trick.

That may change as filmmakers “figure out” the drone for narrative cinema (drones already make perfect sense hovering above live events). For now, in narrative movies, they’re ﬂashy for the sake of ﬂash. “The first close-ups in ﬁlm were ostentatious,” Jacobson explains. “[Filmmakers] said, ‘Look what we can do now: we can ﬁlm in close-up. Wouldn’t that be different, and wouldn’t that be interesting to audiences?’ Cinema’s ﬁrst jump-cuts, the ﬁrst attempts at 3D, the wow-factor when we see Dorothy step foot into Oz, ﬂush in full Technicolor—these, Jacobson argues, are generational examples of technological showboating, where directors stress what the medium is capable of. But there are growing pains as ﬁlmmakers introduce new ideas into an established cinematic vocabulary, and as drones deﬁne their niche, this may be painfully—or exhaustingly—apparent. (Anderson, for example, is suffering from something he calls “GoPro overdose,” where helmet-cam videos on YouTube have become rote.)

We are nearing a better idea of what drones are good at in Al Purdy Was Here, a debut documentary by Brian D. Johnson (and former Maclean’s ﬁlm critic) that uses sumptuous drone cinematography to capture the land surrounding Al Purdy’s infamous A-frame cottage in Ontario’s Prince Edward County—a helicopter could not get this close. These shots help Johnson’s ﬁlm break free from a documentary mode rife with talking heads, and we see the landscapes by which the poet Purdy was so enchanted. Like Dheepan, Al Purdy Was Here is playing at TIFF this year.

“Yes, drones are a gimmick to attract attention,” says Toronto-based digital ﬁlmmaker Davin Lengyel. Lengyel uses his drone to record rock climbing outings and the odd YouTube video, but as a cutting-edge producer and a winner of a Canadian Screen Award for Digital Media in 2014, Lengyel already envisions a purpose for the drone beyond visual ostentation: “One of the coolest things I’ve ever seen was a drone ﬂy through ﬁreworks. That could only be done with a drone.” Lengyel says drones could show us the inside of a volcano, for example.

At this point, drones as narrative ﬁlmmaking tools feel shoehorned in—all artiﬁce and novelty. A drone can replicate the functions of a helicopter or a crane or a jib at a fraction of the price, but if drone shots don’t move beyond stunt photography, they will remain what they currently are: ﬂights of fancy.