The talented B.C. child star who's soaring to Hollywood success 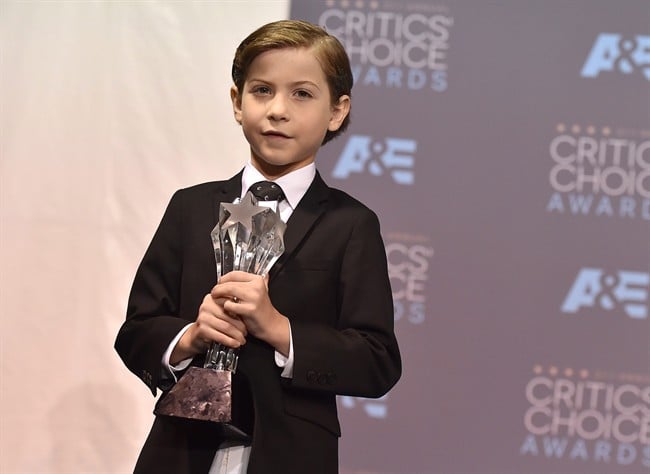 Jacob Tremblay poses in the press room with the award for best young actor/actress for “Room” at the 21st annual Critics’ Choice Awards at the Barker Hangar on Sunday, Jan. 17, 2016, in Santa Monica, Calif. (CP/AP/Photo by Jordan Strauss/Invision/AP)

“He just blew me away,” Alison Parker said Tuesday. “He was only five years old but he was so much better than all the actors that I had seen.

“I just fell in love with him right away.”

The youngster became the talk of Hollywood after delivering a heart-melting acceptance speech to a star-studded audience in Santa Monica, Calif. The self-described Star Wars fanatic thanked his parents and the film team before adding that he knew exactly where he would put the trophy.

“Right on the shelf beside my Millennium Falcon,” he said to cheers and applause.

Parker said she considers it an honour to have been there for the start of Tremblay’s critically acclaimed acting career and his meteoric rise.

“It’s a pretty cool thing to get to spot young talent,” she said about Tremblay’s role in her 2013 film “The Magic Ferret.”

“I don’t think that young actors are often recognized or credited for what they do as actors. But I think everybody knew … that we were working with someone special.”

She said it was remarkable to see “this little knee-high kid” make fewer mistakes than the adult actors, adding that Tremblay’s accolades are no fluke and that he fully deserves his success.

Tremblay has been nominated for numerous other awards, including against veteran Canadian film icon Christopher Plummer for the 2016 Canadian Screen Award for Leading Actor.

“Corner Gas” star Fred Ewanuick worked alongside Tremblay in “The Magic Ferret” and said what stuck out most about the young actor was his talent, professionalism and how much he clearly enjoyed being on set.

“He’s all together. I wish I was (as) together now as he seems to be at his age,” Ewanuick said, laughing.

“He just seems to be so comfortable with who he is. And he’s doing this acting thing not because his parents want him to be a big star. He’s doing it because he wants to do it.”

He called Tremblay’s success well deserved, adding that he comes from a supportive family.

Tremblay’s sisters also act, with his elder sister Emma having appeared in films such as “Elysium” with Matt Damon and “The Judge” with Robert Downey Jr. and Robert Duvall.

The two acted alongside their youngest sister Erica for the 2014 television short “Santa’s Little Ferrets,” also directed by Parker.

Tremblay’s father works as a detective with the Vancouver Police Department and the family lives in Langley, B.C.

Director Jeremy Lutter cast Tremblay in his 2015 short film “Gord’s Brother,” about a boy and his monster sibling.

Lutter had experience working with 10- to 11-year-old kids, but said he was worried about finding a seven year old who could act.

His trepidations proved unfounded after finding Tremblay, whom he described as very professional and a pleasure to work with.

Lutter recalled one memorable moment while shooting a hospital scene when Tremblay began eating from a bowl of candy being used as a prop.

“I thought that was really cute,” Lutter said with a laugh. “He was seven, after all.”

Tremblay will appear in the upcoming movies “Burn Your Maps,” “Shut In” and “The Book of Henry,” all of which are set to be released in 2016.