'The Three Musketeers 3D' wants to be Pirates of the Parisians

A classic gets dumbed down and tarted up, with Milla Jovovich as a ninja sexpot, Orlando Bloom in a pompadour, and D'Artagnan as a Beverly Hills teen 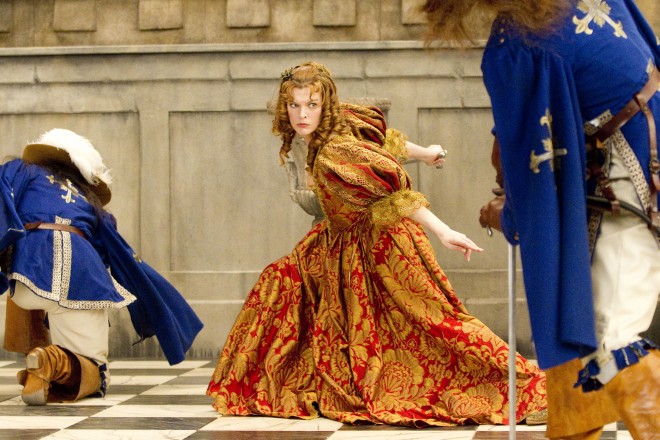 Swashbuckling is not enough. That’s what Hollywood has learned from the massive success of the Pirates of the Caribbean franchise. Sure, there is plenty of fencing. But you also need ghosts, killer mermaids, zombies, squid-beards and a shipload of special effects. As Jaime Weinman point outs, the sci-fi travesty of The Three Musketeers 3D marks yet another chapter in Hollywood’s perennial quest to remake and reshape the Alexandre Dumas classic. But its also a shameless attempt to create another Pirates-style franchise. Staging battles in the clouds between galleon-like airships, it takes swashbuckling to a whole other level, as if rewiring the 17th century with Star Wars swordplay.  But this movie is clearly not designed as a one-off. It desperately wants to be a franchise, and makes that crudely obvious.

Without completely spoiling the ending (though I’m sorely tempted to), let’s just say that the filmmakers feels they can’t afford to kill off their villains—not the evil genius Cardinal Richelieu, played by a depressive Christoph Waltz, who still seems to be in recovery from his Oscar victory for Inglourious Basterds; not the oily Buckingham, played by Orlando Bloom as a rock star in a pompadour, and certainly not the femme fatale trickster Milady de Winter, played as a ninja sexpot spy by Milla Jovovich doing her best Courtney Love impression. Jovovich also happens to be the wife of the director, Paul W. S. Anderson (Resident Evil), and judging by the doting way he’s filmed her, the man is totally smitten. There is yet another villain, Richelieu’s henchman, Rochefort, portrayed by an eye-patch wearing Mads Mikkelsen (he must still be recovering from his bleeding eye in Casino Royale). Mikkelsen shouldn’t be around for any sequels, unless this would-be franchise takes a another cue from Pirates of the Caribbean and brings ghosts into the mix.

It’s sad to think that for whole generation of kids, The Three Musketeers 3D will be remembered as the “original” version. Not that it’s all bad. The trio who play the Musketeers—Matthew McFayden (Athos), Luke Evans (Aramis) and Ray Stevenson (Porthos) are all solid British stage actors who make the most of a lame script. But imagine their disappointment when they discover that they’re playing the three Musketeers but are not the stars of the film. The hero is the young hothead D’Artagnan, played by Logan Lerman, a teenager from Beverly Hills. Lost amid all these theatrical English accents (which serve as a surrogate for 17th-century French), this kid sounds just like . . . a teenager from Beverly Hills. The Beverly Hills Mall. As for his acting chops, to say he’s no Johnny Depp is putting it mildly. He’s shallow, stilted and charmless. The tone of the movie, meanwhile, flies  all over the map, swinging from portentous costume drama to martial arts movie with stabs of Monty Python sketch comedy.  It all adds up to a glib, cynical concoction that’s so cheesy it makes Pirates of the Caribbean look classy.

That doesn’t mean it won’t be a hit. The Three Musketeers 3D is clearly not a critics’ movie. But it delivers a full-course buffet of spectacle. And judging by the enthusiastic response from the large audience at the preview I attended, we may be stuck with these Musketeers for some time to come.