The timely gravity of 'Three Billboards Outside Ebbing, Missouri'

Could Martin McDonagh's 'Three Billboards,' spurred by an acting tour-de-force from Frances McDormand, be this year's 'Moonlight' at the Oscars? 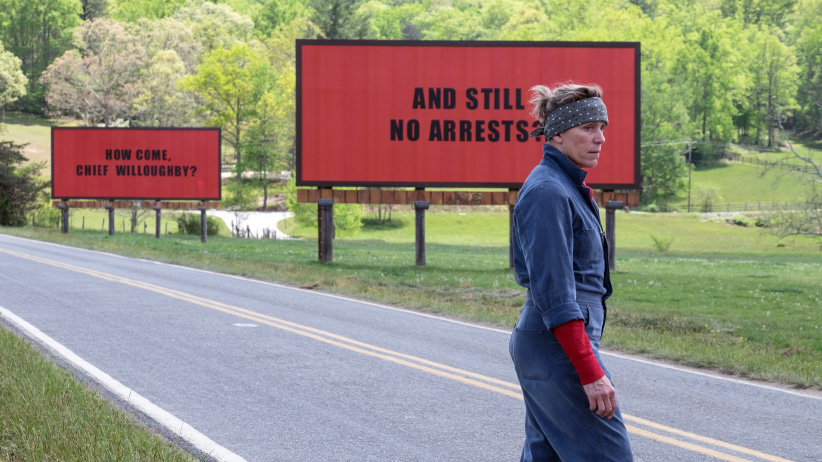 As the primary constituency that inflicted Donald Trump on the world, white working-class America has a lot to answer for. But as Trump’s presidency blunders into its second year, and we peek through the curtains like terrorized citizens of a western town overrun by outlaws, along comes a white working-class hero that we can root for—a woman named Mildred Hayes.

She’s the protagonist of Three Billboards Outside Ebbing, Missouri, a darkly comic drama set in the fictional Southern town of Ebbing, a sleepy enclave where casual sexism and rote bigotry pass for repartee. Mildred is what Trump might call a nasty woman. Played by an incendiary Frances McDormand, she’s a mother on a mission, deeply embittered and desperate to draw attention to an unsolved crime—the rape and murder of her daughter. Mildred is a walking Molotov cocktail of grief and rage, fused with a lethal wit.

She ignites a one-woman culture war by buying three billboards with a series of messages blasted like anarchist slogans in black-on-red block letters: “RAPED WHILE DYING . . . AND STILL NO ARRESTS? . . . HOW COME, CHIEF WILLOUGHBY?” Willoughby (Woody Harrelson) is the town’s beloved police chief, a decent, congenial man. And with her billboard assault, Mildred makes herself an instant pariah. “The local police department,” she proclaims, “is too busy goin’ around torturing black folks to be bothered doing anything about solving actual crime.”

A movie takes so long to make that you never know just how it will drop into the zeitgeist. Irish director Martin McDonagh (In Bruges, Seven Psychopaths) wrote the script for Three Billboards eight years ago. But as retro racism inflames America, and a revolt against sexual predators rips through Hollywood like a wildfire in a Santa Ana wind, the movie lands with auspicious timing. Three Billboards is being hailed as the movie of the moment. And as we head into awards season, so far it seems poised to be this year’s Moonlight; it’s an utterly different kind of movie, made with more money and stars, but like Moonlight, which won last year’s Best Picture Oscar, it tackles tricky issues of gender and race head-on, without getting preachy. It’s also a fiercely original film powered by a story that waylays us at every turn. And beneath its stylish and disarming surface, a crack ensemble cast summons up surprising depths of emotion.

MORE: Why the Moonlight mix-up was the worst-case scenario for the Academy

As Mildred, the white-trash warrior, McDormand creates a Southern antithesis of the droll and circumspect Marge, the pregnant Minnesota police chief she played in Fargo. And 20 years after winning the Oscar for that Coen brothers’ classic, she’s a strong contender to win another Best Actress award, with only her second lead role on the big screen. The 60-year-old McDormand (who is married to director Joel Coen) has always stood defiantly outside the Hollywood bubble, with one foot firmly planted in theatre. And onscreen, she has carved out a unique niche as a character actor, while refusing to participate in the showbiz circus of press junkets and photo-ops. But with her larger-than-life performance in Three Billboards, whether she likes it or not, McDormand finally takes her place as a movie star.

She has forged a new prototype of the anti-heroine—a profane feminist warrior who displays the kind of crazed confidence and reckless bravado usually reserved only for men. It didn’t hurt that McDonagh wrote the role specifically for her. “I knew it had to be someone with complete integrity, and a dexterity for deadpan comedy that doesn’t overplay the humour,” the director told me in a recent interview. “But it also needed to be a working-class woman, and there aren’t many actresses who can do that convincingly. I don’t know who I would have gone to next if Frances had said no.”

McDonagh says the idea for the film was sparked by a couple of similar billboards he glimpsed while riding a bus through the Southern states 20 years ago. “I had this billboard image of rage and pain,” he says, “and I decided that the person who put these signs up was a mother. The character of Mildred fell into place. From that first moment, I had Frances’s voice in my head.” Three Billboards is the director’s first film with a female protagonist, and in writing the script, it’s as if he was channelling her impetuosity. “I didn’t know what was happening next,” he says, “No plotting, no structure. Basically, I came up with Frances’s character, and let her explode through this town.”

In the film’s press notes, McDormand says she played her character as a dude, a lone western hero like John Wayne, or a mystery man from a spaghetti western. Her hair is shaved at the back. She wears the same car mechanic’s jumpsuit throughout the film, and in her more aggressive scenes, a bandana. But for every blunt stereotype that the film throws up, it sharply undercuts expectations. “Frances’s character is technically the hero,” says McDonagh, “but she goes to places that aren’t decent or humane or heroic.” His intention, he adds, was “to paint no one as a pure villain or hero—just to see the human side of all these characters.” 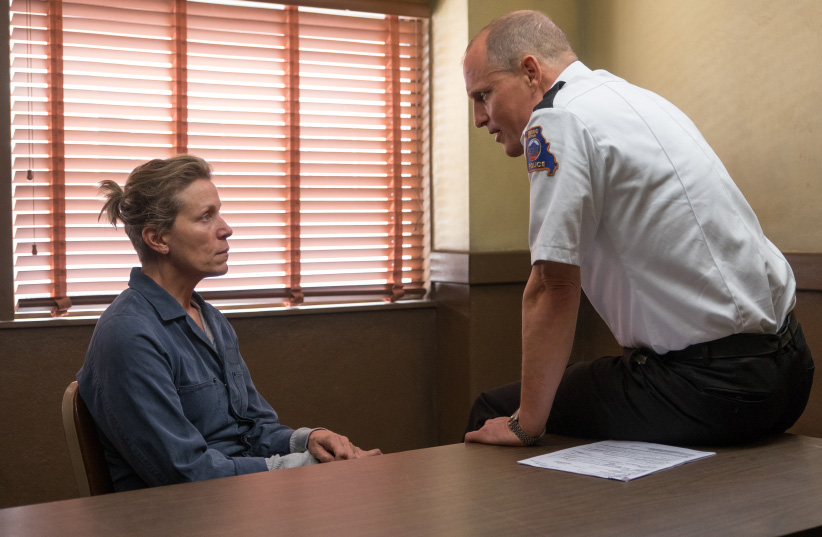 Veering between quirky dark comedy and operatic tragedy, the narrative unwinds with giddy mood swings, and plot twists that no one could see coming. Each character is shaded with moral ambiguity. Harrelson’s Chief Willoughby appears to be a tolerant, easy-going family man, but also a wily trickster determined to get the last laugh, even at the expense of his wife (Abbie Cornish) and their children. Mildred’s ex-husband (John Hawkes), who has taken up with a young bimbo, seems like a jerk, but turns out to have some heart—just as her unwelcome suitor (Peter Dinklage), a self-deprecating dwarf, proves to have a spine.

The story’s most volatile character, aside from Mildred, is Willoughby’s idiotic deputy (Sam Rockwell), a callow and impulsive cop. He comes across as a stock villain, a pathetic victim of his own dumb-assed prejudice, but then traverses the wildest character arc imaginable. Rockwell’s stoical, come-from-behind performance is a revelation, and as a supporting actor who slips into the lead, he’s guaranteed an Oscar nomination.

McDonagh, who is also a playwright, tends to juice cinematic realism with theatrical flourishes and dialogue that can be too clever by half. With his first two features, he edged into that mordant style of self-referential cinema favoured by Quentin Tarantino and the Coen brothers, in which the director’s wit hovers above the action. In fact, McDonagh admits that In Bruges had just “pockets” of compassion, and that his last film, Seven Psychopaths, “was more of a movie about movies, without character empathy.” But with Three Billboards, he says he tried to suspend his directorial supremacy, and “not be judgmental or patronizing or sentimental about anyone, but just jump in and be with their struggles and their pain.”

What feels groundbreaking about this movie is how it pulls together two far-flung inclinations of American film: smart-ass mischief and emotional sincerity. I can’t remember seeing a movie that achieved such an unlikely co-existence between cynicism and tenderness. With McDormand and Rockwell doing the heavy lifting, McDonagh manages to move beyond his dogged ingenuity and find a sweet spot of honest redemption, even gravitas. It’s telling that Three Billboards won the People’s Choice Award at the Toronto International Film Festival, a prize that usually goes to more earnest fare: Style and wit may seduce the critics, but emotional force is what wins over the crowd—and the Academy.

This is not the first time we’ve seen a movie about racist cops, rape and murder in a small Southern town. Three Billboards features a rich scene of a black detective from the city showing up at the Ebbing police station, one that seems like a clever allusion to In the Heat of the Night, Norman Jewison’s Oscar-winning classic about a black cop investigating a murder in Mississippi. But McDonagh, who is 47, swears he had not seen that movie when he wrote his script, and caught up to it just three years ago. Which perhaps makes the resonance more genuine than if it had been planned. This year marks the 50th anniversary of In The Heat of the Night. Racism and sexual assault are once again once again at the forefront of America’s culture war, and the movies are still trying to keep up.