Bare breasts (and a bum), a drenched jubilee, not to mention a royal pregnancy (need we say whose?) 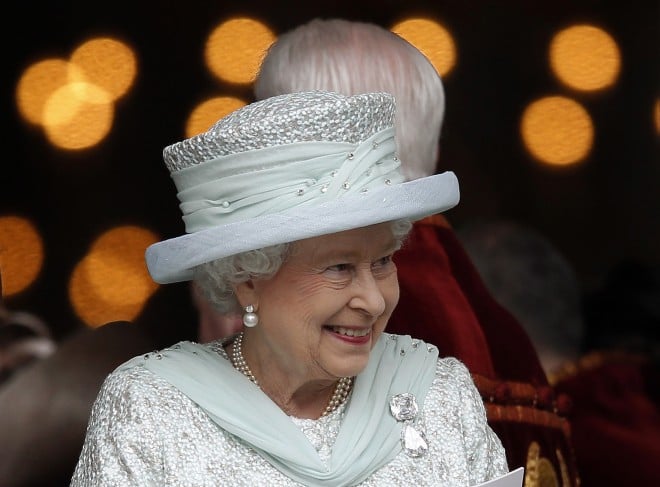 1. Diamond Jubilee of Her Majesty Queen Elizabeth II, By the Grace of God of the United Kingdom, Canada and Her other Realms and Territories Queen, Head of the Commonwealth, Defender of the Faith: Okay, the title is just fun. And so was the 60th anniversary of the Queen’s reign. It started on Feb. 6—though that’s not “celebrated” as it’s the day her father, King George VI, died—and went right through into December. Canada got a nice stamp, an even nicer stained glass window for Parliament Hill, 60,000 Diamond Jubilee medals, with accompanying paper personally signed by Governor General David Johnston, and a visit by Prince Charles and Camilla, duchess of Cornwall. The world got a four-day extravaganza in London. Not even the pouring rain on the Thames River pageant could drown the enthusiasm of millions. Hundreds of thousands turned out for a huge concert in front of Buckingham Palace with millions more showing up the next day for the main event—a service of thanksgiving in St. Paul’s Cathedral followed by a carriage ride through London and the traditional balcony scene back home. Only the hospitalization of Prince Philip (see also below) put a damper on events.

2. Wedding of Prince Guillaume, hereditary grand duke of Luxembourg, and Countess Stéphanie de Lannoy: Oooh, a royal wedding. Luxembourg might be tiny—population 520,000—but it more than made up for its geographic deficiencies by throwing a spectacular wedding. And that involved inviting tons of royalty who dressed up in spectacular gowns and tiaras for two days of events. (The fabulous Royal Order of Sartorial Splendor website has a complete rundown on all the fashion hits and misses.) Best of all, the bride wore a spectacular Elie Saab dress with her family tiara (to have a family tiara!)

3. King Juan Carlos of Spain damages the monarchy: Ever since the king single-handedly put down a coup attempt in 1981 he’s enjoyed widespread popularity among Spaniards. But events of 2012 have battered his reputation as he endured an annus horribilis. In April he left his economically and socially depressed nation to jet off to Africa for a luxury shooting trip. He fell down a step, broke a hip and was flown home by private jet. But his nation was not happy with the appearance of a monarch swanning off for an exotic vacation while his country suffered. Also that month his 13-year-old grandson shot himself in the foot. In July he was ousted as honourary head of the Spanish wing of the World Wildlife Fund. And if those events weren’t enough, throughout the year his son-in-law, Inaki Urdangardin, has been investigated on allegations of corruption. It’s so serious that Urdangardin and his wife, Infanta Cristina, have effectively been banned from royal events. And serious questions are being asked about how the king and his family sustain their lifestyle.

4. The royal pregnancy: Do I need to say which pregnancy? Poor William and Kate. They were clearly forced into announcing the pregnancy well before they’d planned when Kate was admitted to hospital for acute morning sickness. As my colleague, Ken MacQueen, states: they’ll face the scrutiny with grace under pressure.

5. Monaco’s travails: when Princess Caroline of Monaco announced “with joy” the engagement of her eldest child, Andrea Casiraghi, to the heiress Tatiana Santo Domingo, there was no photo op, no showing off of the ring, just a terse statement. Odd, given he’s No. 2 in line to the Monaco throne, behind mum. Rumours started immediately that the bride-to-be was pregnant. Finally, in November she showed off a big belly. Oh, well, nothing new for this family. As I wrote last year about Caroline and her two siblings:

For decades the Grimaldi family has hit the headlines with trashy tales of wildly unsuitable lovers, broken marriages and brawls. Indeed, illegitimacy and shotgun weddings are almost de rigueur: of the three siblings’ nine children, five were born out of wedlock while two others arrived less than nine months after their parents’ nuptials.

There was one upside: it stopped us from looking at Princess Charlene’s glum, pained face and washed-out beige/boring clothes.

6. King Bhumibol’s health: He’s been on the throne for 65 years, but King Bhumibol of Thailand’s health has rendered him a monarch in name. So while millions hit the streets to celebrate the longest reigning monarch in the world, they are also worried about the future. Because there are a few, er, concerns about his heir (here and here and here.)

7. The failing health of Prince Philip: After landing in hospital last Christmas with heart conditions, he returned to hospital twice this year with bladder infections, including one on the Queen’s Diamond Jubilee weekend that had him missing the big service of thanksgiving and balcony appearance. Then, on Remembrance Sunday, he wobbled when backing down the stairs at the Cenotaph. He looks increasingly gaunt and admits his memory is failing. He may be slowing down, but he’s still keeping up a schedule that would defeat any other 91 year old.

8. Kate’s breasts: The pictures are grainy, taken by a telephoto lens from more than a kilometre away, but they spawned a massive international scandal when a French magazine published them. Then the photos of a topless Kate on vacation with Prince William in France went viral. Royal lawyers got an injunction but the damage was done. Worst of all, they were released while the couple was visiting a mosque on a royal tour of the Far East.

9. Princess Estelle born in Sweden: The country was the first to drop male primogeniture (male heirs before female ones) and adopt a “first born gets the throne” law. So after King Carl XVI Gustaf, his daughter Victoria will inherit the throne, followed by Victoria’s first child, Estelle, who was born Feb. 23. Her christening was the biggest thing to hit Sweden since Victoria’s wedding. And a sign of what is to come. Estelle will have a lot of female regal company: Norway, the Netherlands and Belgium also have girls lined up to be monarchs.

10. Harry’s bum: he completed a fun, successful visit of the Caribbean and Brazil for his grandmother’s Diamond Jubilee, was front and centre during the Olympics, and then capped off the year as an Apache attack helicopter pilot in Afghanistan. But all anyone will remember about Harry in 2012 will be his Las Vegas blow out and naked bum show.