'This is the End' but Seth Rogen is still laughing

Rogen on the apocalypse and a cast of actors playing themselves 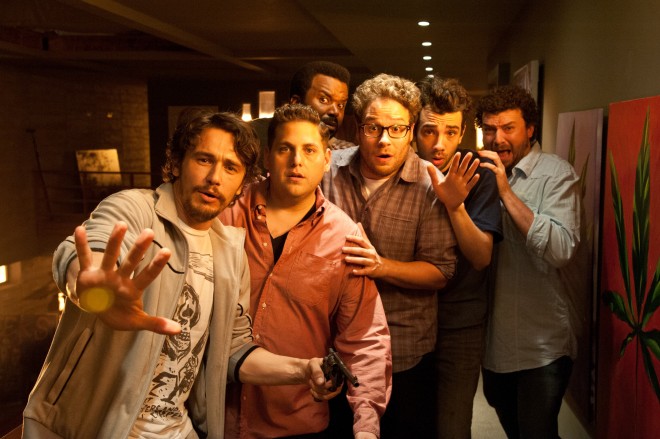 In This is the End, Canadian actor Seth Rogen leads a troupe of actors who play themselves in a profane farce about the the apocalypse arriving during a wild party at James Franco’s house in Los Angeles. Rogen co-wrote the movie with former Vancouver schoolmate Evan Goldberg (Superbad, Pineapple Express), and together they also make their feature directing debut. Rogen spoke to me by phone from Los Angeles. Here is an edited transcript of our conversation:

Q: This is the End lands at a time when there’s glut of more serious apocalyptic blockbusters. Oblivion, The Host, After Earth, World War Z. What’s up with that?

A: It’s just kind of been in the ether. I think it’s probably just because people think the world is going to end soon. For us it was purely coincidental that this is how long it took us to get the movie made. We made the short in 2006.

Q: It seems the end of the world is always closer at hand in Hollywood.

Q: The apocalypse genre has become gentrified with A-list actors and humongous budgets. Did you want to return to the campy roots of the genre, or is the end of the world just a backdrop for a relationship comedy?

A: It was kinda both. We grew up being huge fans of Sam Raimi and that type of fun but gruesome horror movie. Tremors was a big movie for us. At the same time, the best ideas come when you combine two ideas, and that’s what we did here. We also had this idea of actors playing themselves, and this idea of your new friends versus your old friends. We put all the ideas together and that’s when the movie solidified for us.

Q: I love your take on celebrity entitlement, as if there’s going to be a velvet rope and a list at the gates of heaven.

A: [laughs] That’s how we hoped it would be anyway. We could skip the line.

Q: You’re satirizing this stuff, but at the same time you’re on a set with movie stars and their egos. Does life imitate art?

A: A little bit at times, definitely yeah. Everyone’s very well behaved in real life. But it is always a fine line between making fun of something and just trying to show it for what it is. That’s what we tried to do. We always kept saying we wanted it to seem like you hate these people but at the same time you wish you were hanging out with them.

Q: I haven’t seen a movie pop like this since Ghostbusters. It’s like an R-rated Ghostbusters, the way it goes through the roof, literally, in the final scenes. Were you thinking of Ghostbusters?

A: Probably, subconsciously. We actually didn’t reference it that much while we were making, but after we watched it, we were like, ‘Yeah, I see what we kinda did.’ It’s one of me and Evan’s favourite movies of all time, so it’s not shocking.

Q: It has the same meta lift-off at the end. And you went back to the original script for the apocalypse: the Book of Revelation. Did you dig right into it?

A: All the stuff in the movie is from the Book of Revelations: the bottomless pit opening up, the smoke coming from the pit, the creature, the giant monster with seven heads. All that stuff is in there. The joke when we were writing it is ‘What if they’re right.’

Q: Except for the monster’s giant penis.

A: I assume it will have a dick. They don’t specify in Bible but we took some liberties.

Q: For a budget of just $31 million, you’ve got all those special effects. Was that tough?

A: It was really hard. You have to plan a lot and you have to be really smart about how you’re spending your money. We watched movies like Cloverfield and District 9 as benchmarks for what you could do with not a lot of money.

Q: You directed this with your writing partner. Was that a huge leap? Did it feel natural?

A: It did in a lot of ways. It’s not the hardest thing we’ve had to do on a movie. Producing a movie is a lot more stressful and takes a lot longer than directing a movie. Directing is the fun part. You get to decide how it looks, you get to talk to the actors and pitch jokes and shape the tone. What we’ve had to do as writers and producer is all the heavy lifting to prepare for the director to come in and have fun.  So we thought maybe we should try having fun.

Q: To be directing a scene from the inside out [as an actor], how does that work?

A: It was interesting. At times it was actually easier. The proximity allowed it to have a more immediate pace. You can do things more in the moment. But it also threw the actors a bit and sometimes they didn’t like it, and I would go to Evan and tell him to tell them something. And I can imagine why. It would be weird doing a scene with someone and they’d stop me and say, ‘Do it more! Be angry!’ You’re just not used to being told what to do by the other actor in the scene.

Q: You’ve been touring the film, doing Q & As with the audience. What’s the weirdest thing people are asking you?

A: People just seem kind of fascinated with the fact that we’re ourselves in it. And a lot of people ask how different we are from our characters. But that was actually the most surprising thing. When we were filming the movie, there was a lot of discussions about: are we making a big mistake by playing ourselves? But what we kept having in the back of our head was there’s a chance that’s what people will like more than anything. What was a pleasant surprise is that people seemed to go with it even more than we thought they would.

Q: But the studio was skeptical, no?

A: Very much so. To the point that it honestly made us skeptical, or at least me. But the actors’ enthusiasm for it really counter-balanced the studio’s skepticism. The actors were so psyched about it.

Q: Is it true that you lied to the studio saying you’d fictionalize the characters?

We said we would try to shoot a version where we could hypothetically cut around the fact that we’re playing ourselves if people didn’t respond to it—which is not something we did.

Q: Is there something quintessentially Canadian about this take on Hollywood—sending up its belief system that it is the centre of the world.

A: There’s an inherent self-deprecation that goes along with being Canadian. And as Canadians living in America, we always see ourselves as outsiders.

Q: You’ve spent enough time there. Do you still feel that way?

A: Yeah. Culturally, there are just some inherent differences that you will never get around. I’m a lot quicker to go to the doctor than others. That’s the biggest cultural divide I see on a day-to-day basis. I grew up with not a lot of wait going to the doctor.

FILED UNDER: Evan Goldberg James Franco Seth Rogen This is the End