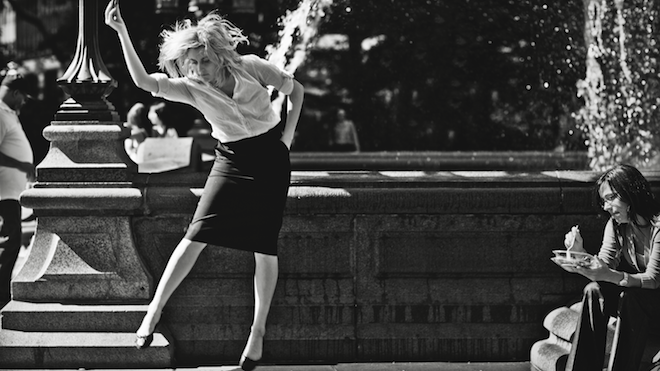 New York, New York. When properly cast, the city is a scene-stealer – sometimes described as Sex and the City’s fifth star. At TIFF this year, we’ll see NYC in Frances Ha, a movie about an aspiring dancer (Greta Gerwig, who co-wrote the screenplay with Noah Baumbach) who moves to the city and gets caught up in the whirlwind and in Imogene, where a New York playwright (Kristen Wiig) stages a fake suicide attempt with disastrous results. Both films premiere at the festival on September 7.

Here are five movies that captured New York City in a way that Friends could only dream of.

5) Big – Tom Hanks launched his career running around the Big Apple as a wide-eyed “big” child in this delightful film. More specifically, he launched it with a “Chopsticks” duet atop of a giant piano in the best toy store on earth, FAO Schwartz.

4) 25th Hour – Edward Norton’s slow goodbye through post-9/11 NYC on the eve of a jail sentence highlights a larger sense of loss, anger and frustration in the city. The opening shot of the changed Manhattan skyline, a visit to Ground Zero and many an American flag showcase the new New York.

3) When Harry Met Sally – The very long courtship of Billy Crystal and Meg Ryan happens across the Big Apple, with scenes in Central Park, the Met, and a very famous scene at Katz’s Diner where another patron decides he’ll have what Ryan’s having.

2) The Godfather – This New York mob masterpiece shows multiple sides of the city in the 1940s, from the bright lights of Radio City Music Hall to the grit of Little Italy to the baptism at Old St. Patrick’s Cathedral.