'By God, it sounds crazy, doesn't it? Just so crazy and unlikely and unusual?'' 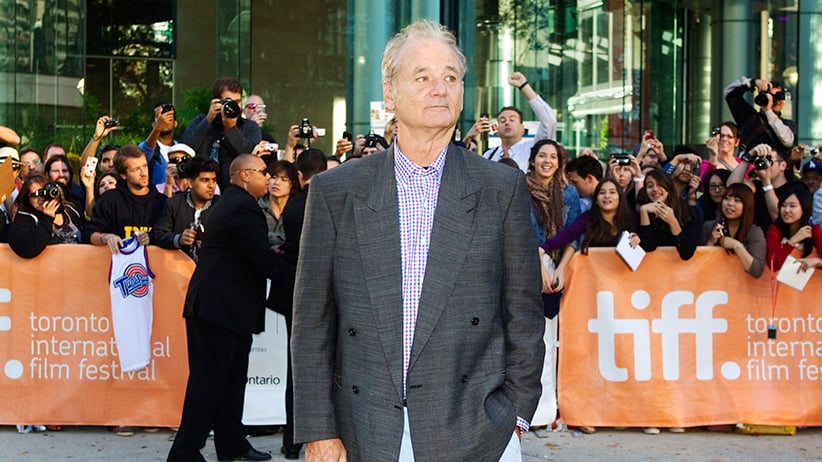 TORONTO — This Friday has been christened Bill Murray Day by the Toronto International Film Festival, and while a few of his best-loved films screen in public, locals should be on the lookout for the actor himself.

Murray has a habit of showing up in the most unlikely places, whether it’s in the engagement photos of total strangers or uncredited at the climax of “Zombieland.”

Below, some of the Top 10 legends about the sardonic, eccentric “Ghostbusters” star:

1. According to a 2010 GQ feature story, anyone who wants to talk to Murray (whether that happens to be a director, producer or a lowly journalist) must dial an 800 number and leave a message. If he’s interested in talking, he’ll call you back. He’s never had a publicist and fired his agent in recent years.

2. On the New York set of “Ghostbusters,” Murray had a penchant for withdrawing a couple hundred dollars in small bills and then distributing the money to homeless people, according to an anecdote relayed by agent Michael Ovitz in Esquire. Murray “knew every doorman and everyone in every restaurant” in the city, where he was apparently beloved.

3. When Murray joined the cast of “Saturday Night Live” in 1977, he was a replacement to the first season’s breakout star, Chevy Chase. When Chase returned to the skit-show institution as guest host, Murray confronted him about something backstage and they traded insults (Chase apparently insulted Murray’s complexion) until the conflict turned physical. Murray told Empire magazine in 2012 that the skirmish was “really a Hollywood fight, a ‘Don’t touch my face!’ kind of thing,” but his alleged parting shot at Chase remains infamous: “Medium talent!”

4. Murray’s relationship with Harold Ramis became strained while the two collaborated on the classic comedy “Groundhog Day.” The film’s producers urged Murray to hire a personal assistant to facilitate communication between the actor and the studio, and Murray gave in. Except he hired someone who was deaf and mute (even though Murray didn’t know sign language). Ramis, who died in February, called the ploy “anti-communication” in an Entertainment Weekly interview. Murray acknowledged in a 2014 Reddit chat that ultimately he and his assistant “didn’t part well.”

5. He loves sports, supports several Chicago-based franchises and golfs avidly. But Murray has also been a part owner of an array of minor-league teams, including the St. Paul Saints, Hudson Valley Renegades, Brockton Rox and Charleston RiverDogs. According to the RiverDogs’ official website, Murray’s job title is “director of fun.” During a rain-ruined RiverDogs game, Murray reportedly entertained the crowd by rounding the tarp-wrapped bases and sliding sloppily into home base.

6. The ugliest blemish on Murray’s otherwise impressive resume is the 2004 film “Garfield” and its similarly maligned 2006 follow-up. But to hear Murray tell it, there was an amusing explanation for his participation. In a Reddit chat earlier this year, Murray claimed that he looked at the “Garfield” screenplay and saw “Joel Cohen” written on it and, thinking of the “Fargo” co-director, agreed to do the film after only a cursory look at the script. Only later did he realize that the decorated sibling directing duo spell their last name “Coen.”

7. There’s an entire website (billmurraystory.com) devoted to public brushes with a frolicking Murray. He tooled about in a stolen golf cart in Sweden, crashed a May bachelor party, and materialized at a house party in Scotland and washed the dishes. He played kickball with strangers, he bartended at South by Southwest with Wu-Tang Clan and he exercised his pipes in the private karaoke room of total strangers in 2011.

8. The “Scrooged” star hosts an annual Christmas party, though he prefers not to call it that. He told Esquire he puts “a lot of Christmas trees around the house so it smells good” and serves “Christmas wine.” Last year, Winnipeg-raised retired wrestler “Rowdy” Roddy Piper tweeted a photo of a “Murray Christmas” card he said he’d received from the actor, which featured a topless Murray with a red bow wrapped around his neck.

9. Murray’s inconsistent commitment to a third “Ghostbusters” film has fed the rumour mill for years. One story that circulated in 2011 claimed that Murray ran one version of a “Ghostbusters 3” script through a shredder and mailed it back to co-writers Ramis and Dan Aykroyd. Whether that’s true or not, he explained his lack of interest in revisiting the franchise in an interview earlier this year with Dazed Digital, arguing: “I find that you don’t really lose by saying no in show business. If you say no, sometimes they come back with a better script. Or sometimes it just goes away.”

10. One Murray tale that might be a Murray myth was related to the comedian directly. GQ asked Murray about the rumour that he was sneaking up behind people in New York, covering their eyes and saying “Guess who?” When they turned around and identified him, he would say: “No one will believe you.” Asked about the legend, Murray took a long pause and said he’d heard the rumour from a lot of people. He then added: “But by God, it sounds crazy, doesn’t it? Just so crazy and unlikely and unusual?”