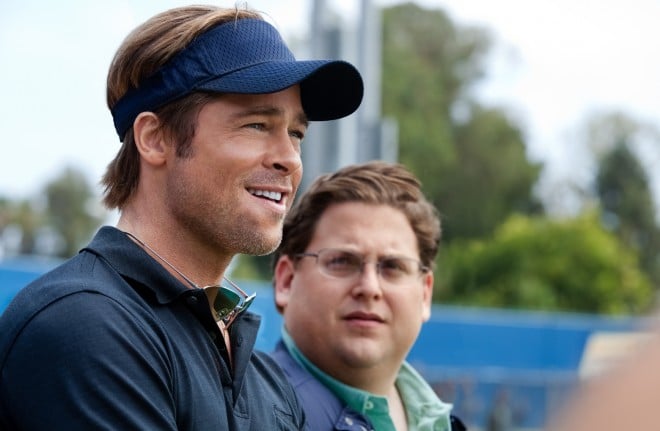 The front half of U2, Bono & the Edge, launched The Toronto International Rock Festival, er, Film Festival last night with From the Sky Down, the first documentary to open TIFF—and one of three rock docs at the festival. Introducing the premiere onstage at Roy Thompson Hall, Bono admitted the band was anxious about letting director David Guggenheim (An Inconvenient Truth) spy on their creative process. “Not because we’re precious—which we are!” he said, but because songwriting “is not that pretty.” He cited the adage that “if you knew what you went into the sausage, you wouldn’t eat it.” When it comes to U2, I’m not much of carnivore anyway, but that’s another story. On TIFF’s opening day, my highlights were two sausage-making stories about the other stuff that goes on in stadiums and arenas when rock stars aren’t performing—namely Moneyball, a terrifically entertaining baseball movie starring Brad Pitt, and The Last Gladiators, a timely documentary about hockey enforcers by Oscar-winning U.S. director Alex Gibney (Taxi to the Dark Side, Enron: The Smartest Guys in the Room)

Pitt is having a remarkable year. First he plays the dark side of the American Dream in Terrence Malick’s The Tree of Life, which won the Palme d’Or in Cannes; and now he switch-hits to the sunny side in Moneyball‘s amazing-but-true story of Billy Beane, a general manager who changed the face of major league baseball.

I don’t claim to know much about the sport. Sure, I jumped on the bandwagon when the Jays were in their World Series prime, but have since run out of time to watch baseball. So I can’t vouch for the authenticity of Moneyball, which treats a still controversial issue. But no matter how “inside baseball” this film goes, you don’t have to know or care much about the game to enjoy it. The story tracks Beane’s feat of turning around the fortunes of the Oakland Athletics by using statistical prowess to make the most of low-rent players. Pitt fills Beane’s role with the natural swagger and wit he rarely gets to a chance to show off. Here, making good on the golden-boy bravado he first flashed in Thelma & Louise, he finally shines with the lustre of a latter-day Warren Beatty or Robert Redford. But what makes the film really click is the hilarious odd-couple chemistry between Pitt and the deadpan Jonah Hill, cast as the nerdy Yale economist hired by Beane to build a winning strategy by number-crunching—with the approach of a black-jack player counting cards to beat the casino. The results of that strategy are etched in the record books, but personally I didn’t know how the story was going to turn out, and I was grateful for that. Moneyball plays mostly as comedy, with most of the on-field action saved for the climactic final act. Then it turns into one helluva sports movie. Expect to see Pitt get an Oscar nomination. 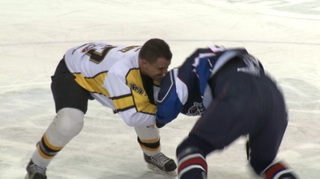 The Last Gladiators is another story of hardscrabble professional athletes. It paints a colourful, heroic and ultimately tragic portrait of hockey goons, focusing on the rise and fall of Chris “Knuckles” Nilan, the Boston star who spent most of his career with the Montreal Canadiens. Making his career with his fists, he aspired to be more than a goon, but ended up as a human train wreck. Black-humoured and brutally candid, Nilan makes an engaging subject as he describes his glory days, and his sad post-career plunge into painkillers, heroin and crime.  But with its detailed focus on his life—other enforcers popping up as talking heads—this is, in essence, an ex-Hab’s rehab movie. And it’s with a warrior romance that, given recent events, seems a bit off key. In light of the current debate about hockey culture, dramatized by the recent deaths of former NHL enforcers,  Gibney’s documentary is so timely that it’s not timely enough. Of course, there’s no way a documentary can keep abreast of breaking news. But it does make you long for a film that would go even deeper into the issue of post-traumatic stress in hockey.