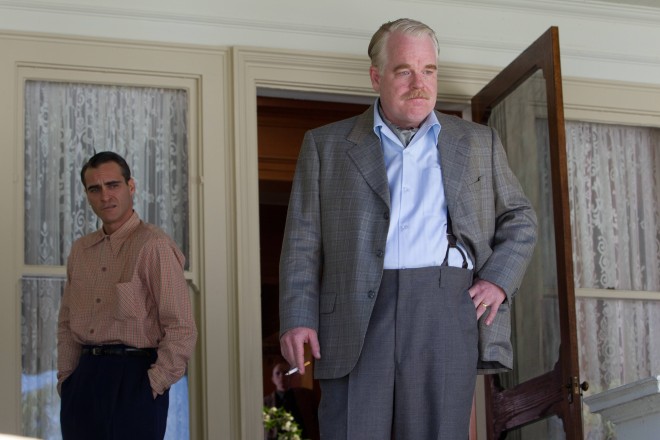 I bring you breaking news from the Toronto Film Critics Association—of which I’m president but do not control. It’s what they call a democratic organization; one critic, one vote. At a weekend meeting, over platters of crustless sandwiches fit for a garden party, we voted on our favorite films of 2012. There was some spirited debate, and some very close races, but no one lost an eye. Unlike the characters in the movie we liked best, we didn’t swig moonshine or wrestle each other to the ground. The Master, Paul Thomas Anderson’s 70 mm epic about a cult leader and the ravaged war veteran who falls under his spell, dominated the TFCA winner’s circle, taking four categories, including best picture, director, screenplay and supporting actor. This is the second time an Anderson film has won the TFCA’s top prize: In 1999, his Magnolia won awards for Best Picture and Best Director, and he shared the Best Screenplay prize with Being John Malkovich author Charlie Kaufman. (Anderson was also named Best Director in 2002 for Punch-Drunk Love, making this his third time winning that award.) Yes, P.T., we like you; we really like you.

The TFCA (of which I’m president) also announced today the three finalists for the newly endowed $100,000 Rogers Best Canadian Film Award: Bestiaire, directed by Denis Côté, Goon, directed by Michael Dowse, and Stories We Tell, directed by Sarah Polley. Each of these movies defies any fixed preconceptions about the character of Canadian cinema. They’re all films of a kind we haven’t seen before. Bestiaire is a visionary documentary from Montreal that explores our relationship to the animal world. Stories We Tell, a doc from Toronto, unfolds as a procedural home movie, investigating the filmmaker’s family secrets; and Goon, shot largely in Winnipeg and set across the country, is a viciously funny comedy about hockey violence.”

The diversity of these three films shows there’s nothing predictable about Canadian cinema. Each represents an adventure in a genre we haven’t seen before. Bestiaire is a visionary documentary from Montreal that explores our relationship to the animal world. Stories We Tell, which toggles between Montreal and Toronto, is an equally unconventional doc: it unfolds as a procedural home movie, in which Polley unlocks a Pandora’s box of family secrets. And Goon, shot largely in Winnipeg and set across the country, is a viciously funny comedy about hockey violence.

Canadian filmmakers were also honoured in the TFCA’s other awards, with Stories We Tell winning the Allan King Documentary Award and Panos Cosmatos sharing the Best First Feature prize for Beyond the Black Rainbow with Benh Zeitlin’s Beasts of the Southern Wild.

More details of the 16th annual TFCA awards, which were voted by the member critics at a meeting on Dec. 17:

The 2012 TFCA Awards will be presented at a gala dinner at Toronto’s Carlu on January 8, 2013, hosted by Cameron Bailey, artistic director of the Toronto International Film Festival. There the TFCA will also reveal the winner of the newly endowed Rogers Best Canadian Film Award, which this year carries a record-setting $100,000 cash prize—it’s now the richest arts award in the country.  The runners-up will each receive $5,000. Actor/director Don McKellar will be on hand to present the award.

I’ve been asked if all that money puts a lot of pressure on us. It shouldn’t. Sure, there’s more pressure to do our homework and make a responsible decision. And there is something strange, and unprecedented, about a ragtag gang of film critics deciding the fate of $100,000—a sum tantamount to major funding for some independent filmmakers. But the TFCA Awards are not a game show.  The selection process remains the same it’s always been: when our members pick the Best Canadian Film in the first week of January, our job is simply to pick what is, in our view, the Best Canadian Film, money be damned. The real pressure is on the winning director, who has to figure out  how to spend, or spread, the wealth.

BEST FIRST FEATURE – TIE
“Beasts of the Southern Wild”, directed by Benh Zeitlin
“Beyond the Black Rainbow”, directed by Panos Cosmatos
Runner-up:
“The Cabin in the Woods”, directed by Drew Goddard