Trumbo and the problem with films about Commie writers 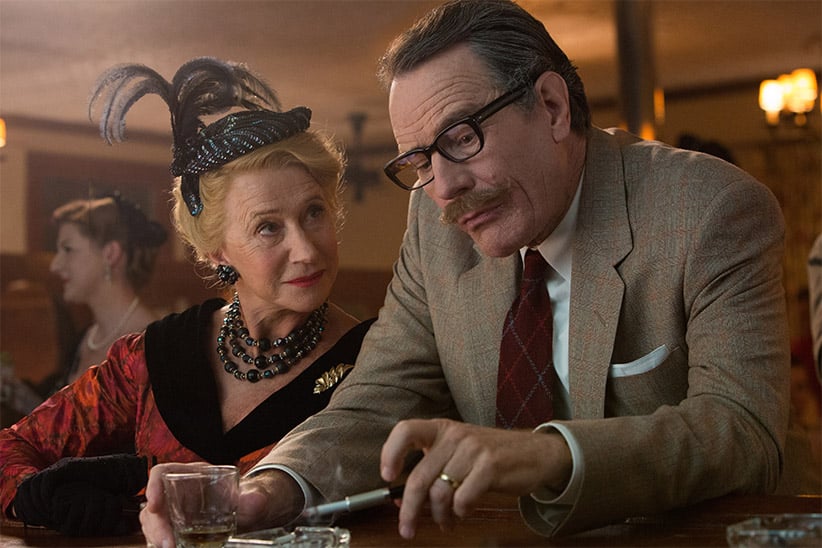 There’s a scene in Jay Roach and John McNamara’s Trumbo that hints, almost unconsciously, that the title character is actually the least interesting person in his own movie. We see Dalton Trumbo (Bryan Cranston), a blacklisted Hollywood screenwriter who’s now writing low-budget movies under aliases, and has recruited several of his blacklisted writer friends to do the same. Trumbo is, as usual, working away at the typewriter on a script. Meanwhile, the television is showing scenes from the protests against racial segregation, and hinting that the Supreme Court may take up the issue. Dalton might be watching this, but he’s too busy writing films.

This short scene—and most of the scenes in this movie are quite short—suggests that the country is changing and Trumbo is too wrapped up in his own work to notice. It fits in with a slightly anti-heroic narrative that is lurking around the edges of the film: the story of Dalton Trumbo is really the story of a guy who claimed to care about making a difference in the world and helping the downtrodden, but all he really cared about was writing scripts. Social change in America happens behind his back (his eldest daughter gets involved in activism, but in one scene he tries to get her to deliver a script to his producers rather than going to a protest), and the blacklist falls apart not so much because of what he did as because of changes—in society and in media—that he didn’t pay a whole lot of attention to.

This background story is in some ways more entertaining than the foreground story, which is very predictable even if you don’t know the history going in. Hollywood has made a number of movies about the blacklist era—it was, after all, one of the few eras when the world paid much attention to screenwriters, positive or negative, including 2001’sThe Majestic (starring Jim Carrey) and 1991’s Guilty by Suspicion (starring Robert DeNiro), but few good ones apart from the 1976 Woody Allen vehicle The Front. Like most of those other movies, Trumbo drains almost all the political content out of the story. Its only explanation of Trumbo’s political beliefs comes when he explains to his daughter that if she wants to share her lunch with someone who has none, she’s a “little Commie.”

By making it seem like there’s nothing about communism—even the anodyne Hollywood variety—that an audience could possibly disagree with, the message of a movie like this always winds up being that the hero shouldn’t have gone to jail because there was nothing wrong with anything he believed or did. Movies like Trumbo hardly ever deal with the notion that people should be protected from persecution even if their ideas unsettle us. It’s very much of a piece with the old Hollywood rule that if you do a movie against lynching, the victim must always be innocent.

But the result is a movie where the hero’s only real flaws are caring too much about winning, and caring more about work than family—which, as it happens, are the flaws Hollywood screenwriters are most likely to identify in themselves. The movie makes it so easy to root for him that it almost becomes boring to do it. Cranston is a movie star now because he played one of the most morally ambiguous TV characters of all time, but here he’s playing a character stripped of almost anything that could make us uncomfortable.

The movie is so uninterested in the politics of the period that it almost makes a joke of the one guy in the movie who actually seems to believe in Communism in any real way. It’s sad-sack screenwriter Arlen Hird (Louis C.K.), the guy who criticizes Trumbo for his wealthy lifestyle, and the only writer stupid enough to try and put subversive messages into his scripts (Trumbo strikes them out). Occasionally the film tries to make Hird into a voice of conscience, but mostly— partly because everything CK says sounds funny, no matter what—he’s welcome comic relief, a cautionary example of why idealism is hopeless.

In fact, McNamara’s script is at its best when it’s trying to be funny. The scenes with Trumbo and other blacklistees ghost-writing B-movies for independent producers Frank and Maurice King (John Goodman and Stephen Root) are the best in the film. Suddenly it becomes a sitcom about a wacky movie producer and his cheap writers, and you almost start to wish the movie were about the Kings instead of Trumbo. Trumbo barely does anything except sit at the typewriter; the Kings actually have the initiative to help themselves to this new source of cheap writing talent.

The problem is that just persevering is not enough to make you a good protagonist, and because of the way this story is set up, Trumbo doesn’t do a whole lot other than find ways to keep writing. His main motivation in the film is his determination to make Hollywood come begging for his talent again, and to flood the market with ghost-written scripts until the absurdity of the blacklist becomes obvious to the world. Now, that’s a likable trait. But the real action seems to happen around him, especially as the movie goes on.

The forces that we see bringing down the blacklist really don’t have much to do with Trumbo himself, though the script sometimes strains to find ways to put him at least at the periphery of the action. They include the collapse of the studio system and the rise of independent producers (small-time ones like the Kings or big-time ones like Otto Preminger), the slight thawing of the Cold War, and the rise of television, which undercuts the power of red-baiters like columnist Hedda Hopper (Helen Mirren): when the movie starts, she has the ability to terrify filmmakers into doing her bidding; by 1960, she’s irrelevant and doesn’t seem to realize it. But all of this is background noise, drowned out by Trumbo’s typewriter.

And so the moral of the story really just becomes that if you wait around long enough, society will forget why it was persecuting you in the first place. It may be true, but it’s not very compelling. Hedda Hopper is one of the few real villains in the film—the movie, inspired by Trumbo’s own concilatory language late in life, goes fairly easy on studio bosses and people who may have named names.  You almost want to strain and look in the background for all that fascinating stuff going on behind Trumbo.

McNamara, a veteran TV writer with many interesting flop shows to his credit (including Profit, an early prototype of the anti-hero drama), is probably going to get some flak for playing around with history. For example, the King Brothers production company was a less schlocky outfit than portrayed here (one of the movies Trumbo ghost-wrote for them, Gun Crazy, is a certified masterpiece). None of that really matters, in a fiction film. What’s more bothersome is that there are some rather bad anachronisms that slipped through, like someone saying “and the Oscar goes to” in an Academy Award ceremony. Letting something like that get through increases the feeling the movie has of being less than a top-tier production; Jay Roach has made a specialty of directing true-story movies for HBO, and this looks like a nice little HBO movie rather than something that has a big reason to be in theatres.

As a theatrical release, though, it gives Cranston a chance at an Oscar nomination, and he obviously has the skill for it; he has the vocal inflections down, and he knows how to move that long cigarette holder around for maximum impact. It’s hard to say whether the movie really gives him the big acting opportunities he needs, except for the big final award-baiting speech. Most of the other actors have thankless parts (Diane Lane is the “long-suffering wife,” and the only thing worse than “long-suffering wife” is “long-suffering wife of a man who’s trying to win an Oscar”), or are stuck doing imitations of famous people. The only celebrity impressionist who really makes a, well, impression is Christian Berkel as Otto Preminger, one of the power players in a changing Hollywood; he gets a laugh with almost every line, and makes you long for some kind of spinoff movie.

It’s odd to long for a spinoff movie while watching a movie that’s supposed to be about a colourful Hollywood figure, but that’s the paradox of Trumbo: the showy parts of the story are about other people. It seems like even when Hollywood screenwriters try to celebrate themselves, they can’t be quite as fascinating as the rest of Hollywood.