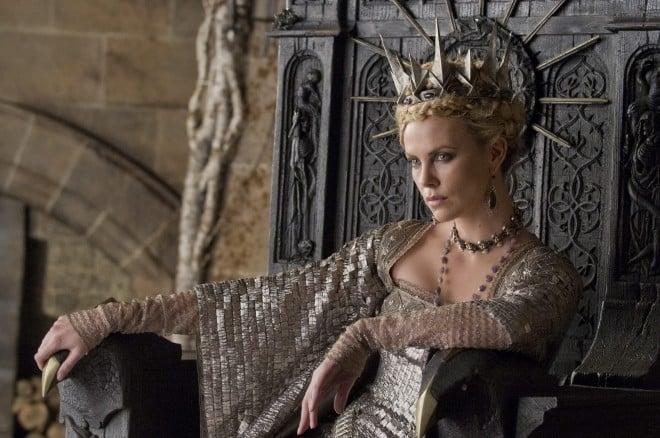 Charlize Theron as the Queen in 'Snow White and the Huntsman'

Mirror mirror on the wall, which is the fairest fairy tale of all? Well, this weekend offers a choice between the Enchanted Forest and the Forest of Disenchantment—between Snow White and the Huntsman, another Hollywood revision of the classic fable, and Moonrise Kingdom, Wes Anderson’s quirky tale of two lovestruck 12-year-olds who elope into the woods.

Snow White and the Huntsman
Being locked in the tower of Twilight all these years, doting on a sullen vampire in a world where sex is a mortal sin, Kristen Stewart must have been dying to break the mold and recast her image. So here goes! She got naked for the bohemian rhapsody of On the Road, an adaptation of the Jack Kerouac novel that premiered in Cannes last month. And now she dons a suit of armour in an epic makeover that turns the Seven Dwarves’ den mother into a veritable Joan of Arc—Snow White, princess warrior.

This is the second movie this year to draw from the fairy tale for source material, after the wretched Mirror Mirror, a cutesy-poo confection starring Julia Roberts as the wicked queen. (It, too, featured a fighting princess; Hollywood now seems to have a law requiring all fairy tale heroines be empowered, if not super-powered.) But Snow White and the Huntsman is far more watchable, even if the tempo of its earnest narrative, stretched beyond two hours, gets a bit turgid, and occasionally mired in a Black Forest tar pit of self-importance.

This feature directing debut by Rupert Sanders is visually sumptuous, with a splendid mix of natural landscapes and computer graphics. From the ambitious battle scenes to the grandiose monsters, Sanders is aiming for a scale of fantasy reminiscent of The Lord of the Rings. And he’s certainly in that ballpark. His Enchanted Forest is truly enchanting, a theme park of flora and fauna reminiscent of Avatar‘s Pandora (with hallucinogenic overtones that are alluded to in a joke about magic mushrooms_. The digital effects, meanwhile, range from dark soldiers that explode into obsidian shards to the molten gold of the Queen’s mirror, which flows right off the wall as a Terminator pool of quicksilver and rises into a cloaked spectre. 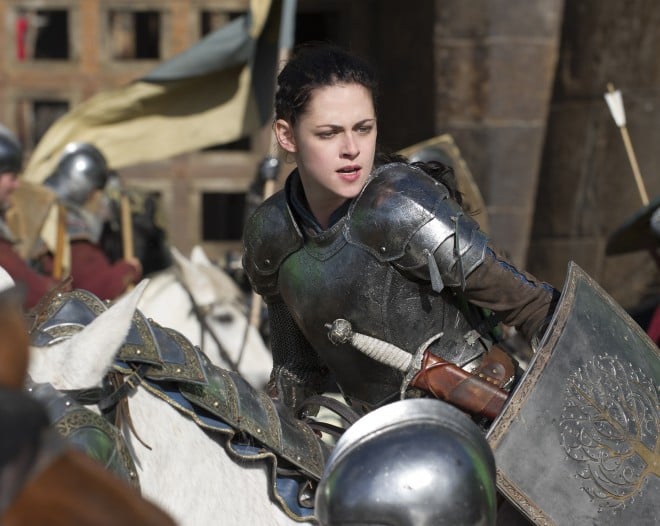 Kristen Stewart in 'Snow White and the Huntsman'

In a scenery-chewing turn as the evil Queen, Charlize Theron plays the role to the hilt, milking every word with Shakespearean theatricality. When she first utters, “Mirror mirror . . . ” her voice drips with such existential solemnity it’s like she’s doing a distaff “To be or not to be . . . ” With costumes that morph into special effects, the film succeeds in giving Theron an iconic power. There’s no nudity in this dark fantasy, but there’s a wanton auto-eroticism to Theron’s performance, especially when camera devours her naked back as she strides into a bath of thick milk, sinks below the surface, then re-emerges still wearing her crown—which makes her look like the Statue of Liberty’s evil twin.

Kristen Stewart, meanwhile, behaves like a junior Movie Star to the Manor Born. She has endless poise, confidence—and sea-green cat’s eyes that are luxurious in close-up. But as an actor she’s expression-challenged, with only a couple of “looks” in her repertoire, pouting and preening. Both involve keeping her lips slightly parted in a pose of self-conscious sex appeal. Not that her character is all that romantically inclined. She’s got two men in her thrall—the stoic Huntsman (Chris Hemsworth), sent on a mission to kill her, and her childhood sweetheart, William (Sam Claflin). But she seems unimpressed by their life-affirming kisses. She’s too busy making history.

Then there are the dwarves, a folkloric troupe of Celtic ruffians played by digitally reduced actors, including Ian McShane, Bob Hoskins, Ray Winstone and Toby Jones. (One can only imagine the hue and cry among the kind of actor dwarves featured in Life is Short, claiming their culture has been appropriated.) These salty seven dwarves are fun. Not unlike the common folk in a Shakespearean play, they ground the royal melodrama with a robust, energetic realism

Strip away the fantasy and fable, and much of the action consists of old-fashioned medieval battle scenes, with equestrian hordes, fireball catapults, flaming arrows, and all those classic contraptions for laying siege. I’m a sucker for this stuff; I’ve never seen a flock of arrows I didn’t like. For a movie that seems aimed at the young female demographic, there’s a surprising wallop of Boy’s Own adventure. Yes, Snow White and the Huntsman adds up to a shameless pastiche of cinematic tropes. And like its vain Quen, it’s so enamored of its own mirror image that it’s hard to see past the style and get lost in the story. But as sheer spectacle, it delivers the goods. 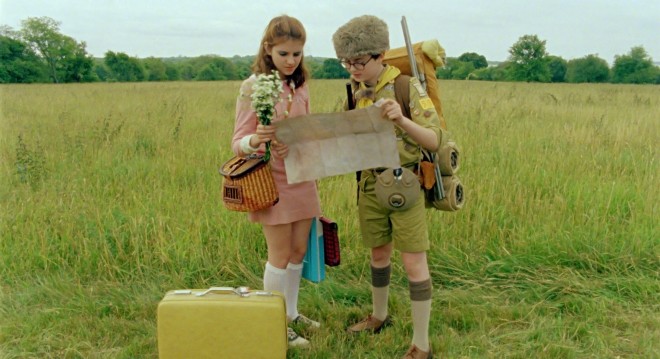 Moonrise Kingdom
This, I guess, is Wes Anderson’s coming-of-age movie—for the director as much as the characters. Like all his previous films, it’s set in a unique universe that resembles no one else’s, a colourful Neverland where everyone is eternally quirky. But this movie revolves around actual children, rather than immature grown-ups, and seems more adventurous than the others. I’m not a huge Wes Anderson fan. I feel his growth as a filmmaker has been rather stunted since Rushmore, with the exception of the brilliant Fantastic Mr. Fox. And although that film was animated, it seems closest into tone to Moonrise Kingdom. Here’s an edited version of what I wrote about Moonrise after its premiere last month in Cannes:

Set on a remote island off the New England coast in 1965, it’s about two 12-year-old kids who fall in love and run away into the woods. They’re an enchanting couple: an absurdly well-prepared boy scout named Sam (Gilman) and his paramour, Suzy (Kara Hayward), a precocious sophisticate with heavy eye shadow and devotion to Francoise Hardy records. Anderson has spent most of his career making movies about adults who act like children–he’s fond of pup tents–but now he’s finally made a movie that’s about actual children, kids who are in a contrived rush to behave like adults. In this movie, unlike The Royal Tenenbaums, the pup tent is pitched in the woods rather than a Manhattan bedroom.

From the small-town interiors to the scout-camp craft, the whole film looks like it has the bright, eccentric beauty of an Americana toy town, as intricate as a Swiss Army knife. Camping has never looked so camp. Imagine a rustic Yankee equivalent to France’s Amelie. But just when you think the story might suffocate in pastel post-modern twee-dom, Anderson will add a a bold stroke of dark comedy or blunt violence. There’s a gravitas lurking behind the scenes that’s absent in much of his work. Then there’s the fact that this is a romance between preteens who instruct each other in such outdoor crafts as French kissing. Don’t get the wrong idea. It’s all very sweet and gentle, as these kids balance on the edge of lust and innocence. And what could be more appropriate in the South of France? But children in love is a notion that might raise a few eyebrows in Middle America.