Twitter has spoken, but will Disney give Elsa a girlfriend? 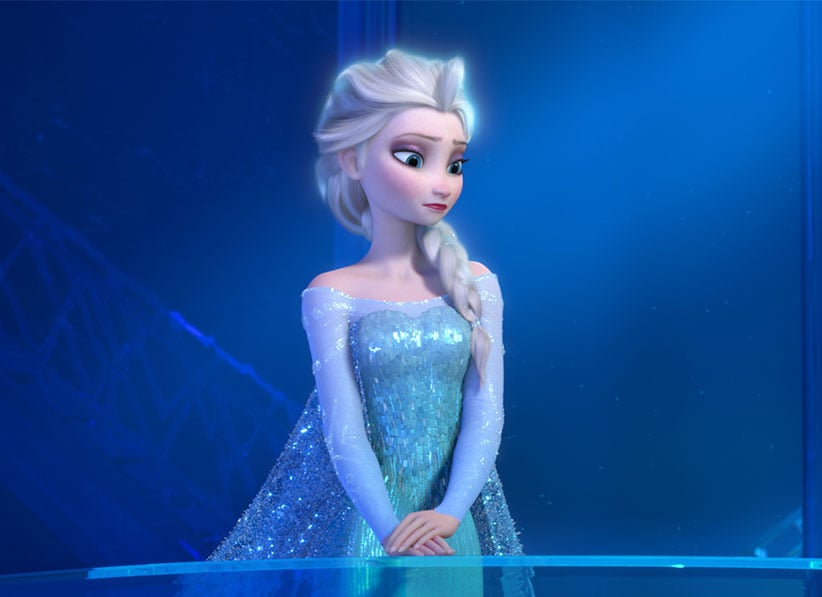 Updated June 14, 2018: “Frozen” and “Frozen 2″‘s writer and co-director Jennifer Lee said in February 2018, “I love everything people are saying [and] people are thinking about with our film ― that it’s creating dialogue, that Elsa is this wonderful character that speaks to so many people… it means the world to us that we’re part of these conversations.”

“Give Elsa a girlfriend,” runs the latest Twitter campaign. The idea is simple. The Disney animated movie Frozen was sometimes embraced as a metaphor for coming out of the closet, because its heroine, the ice princess Elsa, learns not to conceal the qualities that make her different from other people, and brings them around to accepting her. It was sometimes denounced for the same reason. Some fans are saying that the upcoming sequel to Frozen should go beyond metaphor for once, and actually have Elsa fall in love with a woman, just like most Disney princesses fall in love with men. The campaign, started by 17 year-old writer Alexis Isabel Moncada, turned into a popular Twitter hashtag and was taken up by outlets like the Guardian.

Supporters of the idea point out that mainstream Hollywood animation has given us every kind of heroine except a gay heroine. Moncada pointed out to MTV that cartoons have starred “girls who have fallen in love with beasts, ogres who fall for humans, and even grown women who love bees. But we’ve never been able to see the purity in a queer relationship.” This is true, and it raises a question that goes beyond the success of one hashtag campaign: How long can companies like Disney nod toward social progress while keeping it out of their movies?

This isn’t just about children’s movies. For most of the history of Hollywood, LGBT characters barely existed except as minor villains or victims, and definitely not as leads. The movie Bonnie and Clyde was originally written with a bisexual Clyde, only for that plot point to be dropped before the film was shot. Before the 1970s, as critic Mark Harris wrote in the book Pictures at a Revolution, “characters who were incidentally gay, or heroic and homosexual, simply didn’t exist, nor did any kind of movement to lobby for more positive portrayals.”

But while filmmakers could keep this content out of their work, they couldn’t stop fans from theorizing. Many viewers over the years have been frustrated at the lack of LGBT people represented in film and TV, and they often responded by using fan fiction to read those relationships into the work. Perhaps the definitive example is Star Trek, where many fans–gay and straight—have seen Kirk and Spock’s bond as something deeper than friendship. Other character relationships have inspired similar reinterpretations. The Captain America franchise, where the lead character puts himself through hell for the sake of his childhood friend Bucky, has often led fans to link the characters romantically. And before NBC finally featured gay leads in the sitcom Will & Grace, many Friends fans wanted to see Chandler come out, to the point that the creators went on record insisting he was not gay. Frozen is just the latest in a long line of commercial entertainments where viewers create LGBT-friendly readings of works that can’t be openly LGBT-friendly.

Times have changed, though. Unlike in the 1950s, there’s no longer any Production Code preventing gay characters from being positively portrayed on the screen, and gay marriage is legal in the U.S. Fans are increasingly unsatisfied with the idea that every lead character is heterosexual by default; they want to see people like themselves, or their friends, portrayed in mainstream cinema. A campaign like “Give Elsa a Girlfriend” may be partly about the idea that today, there’s no reason for viewers to be satisfied with metaphors and alternative readings: In an era when gay people no longer need to hide what they are, why should they accept being hidden away in mainstream cinema?

Whether Disney would actually accept this argument is another question. Under its current management, Disney is known as a more socially liberal entertainment company than it was when its namesake was alive. Two years ago, the Disney Channel shrugged off complaints from the religious right when it featured a lesbian couple in the sitcom Good Luck Charlie. And Marvel comics, owned by Disney, recently revealed that the X-Men character Iceman was gay–turning a 50 year-old fan theory into canon at last.

But that was one episode of a show that was about to be cancelled, and a comic book with a small audience. When really big money is riding on something, even the most liberal entertainment companies tend to be rather conservative. The big, bankable characters are expected not only to be heterosexual, but to prove it. So in Captain America: Civil War some viewers felt there was a token heterosexual romance shoehorned into the plot, like one of those old cowboy movies where the hero shares a chaste kiss with the schoolmarm. The popular sitcom The Big Bang Theory liked to joke about the possibility that several of its characters might be perceived as gay, but all of them have wound up in straight relationships only. And don’t ever expect to see Kirk and Spock get together any time soon in any medium.

One possible reason for this is that Hollywood usually defaults to the option that will get the fewest angry letters. And producers may be especially cautious when it comes to big blockbuster movies, which are expected to be popular around the entire world. That doesn’t only mean avoiding gay characters, but also avoiding anything that could be at all controversial anywhere on Earth. In its upcoming adaptation of the comic book Doctor Strange, Disney changed the character’s mentor from an old Tibetan man to a Celtic woman, which the writer of the film claimed was done partly to placate China, and partly to avoid the stereotypes associated with the original character. His remarks were not well received, but they may offer a window into Hollywood thinking, and Hollywood’s famous aversion to anything that is even potentially controversial (which, in this case, may have backfired by causing a bigger controversy).

Which doesn’t mean there will never be a gay Disney princess. It just means that Hollywood companies, no matter how progressive they think they are, often run behind the culture as much as they drive it. Asked if Disney would ever introduce an LGBT superhero, the co-director of Captain America: Civil War replied that “the chances are strong,” but added that “it’s sad in the way Hollywood lags behind other industries so significantly: 1) because you think that it would be a progressive industry, and 2) it’s such a visible industry.”

Contemporary Hollywood congratulates itself on moving forward even as, in many ways, it isn’t moving forward very much. The people on Twitter on Tumblr may have to keep pushing to see Elsa get a girlfriend, or for big-budget characters to go beyond platonic friendship. Or they may change the culture enough that even Disney no longer sees it as a risk. And when that happens, Disney executives will pat themselves on the back for being daring, and then write something else off as too risky.