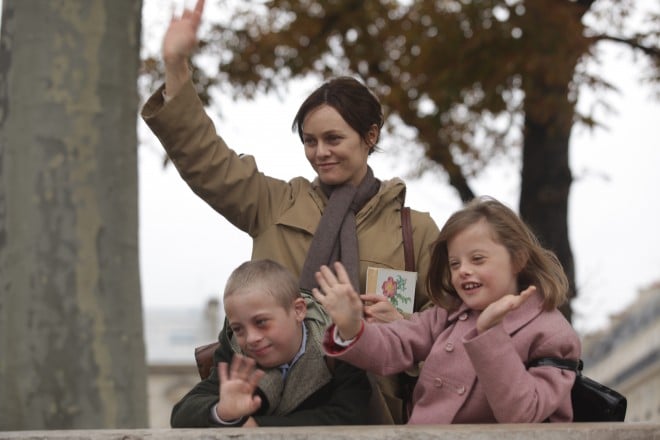 In Café de Flore, a virtuosic new film from Quebec director Jean-Marc Vallée, French pop singer Vanessa Paradis gives a fierce, powerful performance as the obsessively devoted single mother of a Down Syndrome boy. Paradis has two children of her own with Johnny Depp (Lily-Rose Melody Depp, 12, John Christopher “Jack” Depp III, 9). I interviewed her in September at the Toronto International Film festival.

Q. How did you end up in this movie?

A. Jean-Marc needed a French actress. He fished for one, and there I was.

Q. You’re a mother playing a mother; how do you bring your own experience into a role like this?

A. Everything gets entwined together, which is the subject of the movie. You try your best, that’s what parents do. I play a single mother raising a Down syndrome son in the 60s with no money, and her boy is not expected to live beyond his 20s. She becomes very passionate and aggressive. It’s a very different time. Today the life span of Down Syndrome children is older, and the perceptions have changed. The pressure she goes through makes her react the way she does. She’s doing her best to protect him, to save him. If she becomes vulnerable then he becomes vulnerable, and he might die, literally. This woman does a lot for him . . . until she does too much.

Q. What was it like working with a Down Syndrome actor?

A. It was very special. I’d never come close to anyone with Down Syndrome. There are general characteristics. The generosity of love. The purity of love. The beauty of their innocence. The difficulty is the lack of concentration, the stubbornness. That’s the generality. Then there’s the individual. He [Marin Gerrier] was so smart and charming and had everyone wrapped around his finger. He was so loveable. We got along so well and had so much fun. Some days it was hard. It he wasn’t in control of his emotions, and he was rebellious, it could be nerve-wracking. He’d never acted before.

Q. This is such an ambitious film. How did Jean-Marc Vallée rise to the challenge?

A. He is a brilliant and complete in every direction. He’s so well prepared and very technical.  He’s working with a little boy who will kick over all his set ups.  So this is all gone and he’d have to improvise and it would be even better. It was mesmerizing to see him work, and to be so sharp in every direction with everybody, without ever losing patience and always being so subtle. And adding little ideas every day.

Q. Did you talk to Johnny about the film?

A. It’s not something obligatory. We know what we’re doing and we talk about it.

Q. How do you arrange your schedules?

A. That’s like a Rubik’s cube. You don’t want to discuss that. It’s complicated, especially on two different continents—to be there for your children before everything, but not forgetting who you are and what you like to do.  Juggling jet lag and schedules and flying around the world is tough. But  organize our life. It’s a juggling, yeah it is. But it’s working so far.