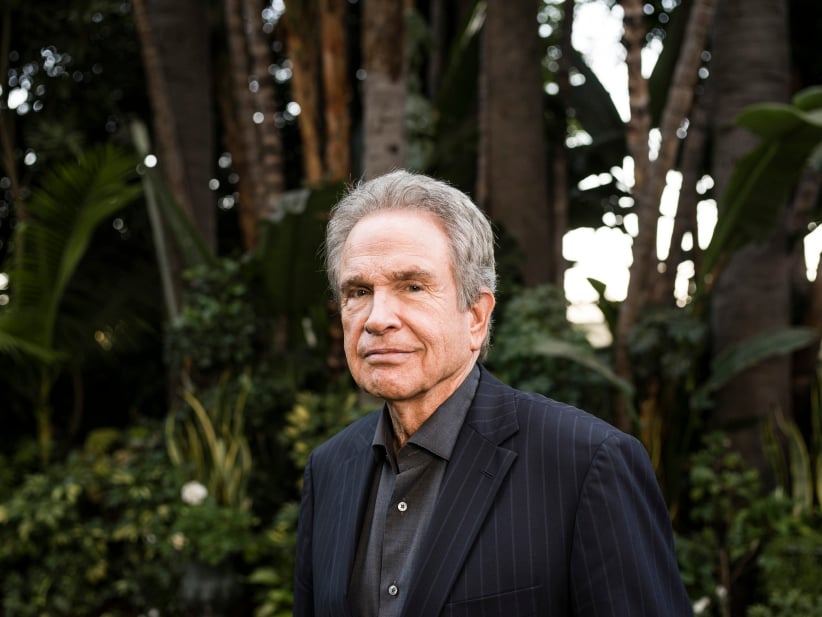 By the time most Hollywood actors reach Warren Beatty’s age, they’ve made a few concessions. They sign to subpar projects, leveraging their fading star power into an easy paycheque. But at 79, Warren Beatty, icon of the New Hollywood Cinema, remains uncompromised.

Unlike his contemporaries, he’s never made a Bucket List or a Dirty Grandpa or a Mr. Magorium’s Wonder Emporium. “I got lucky that way,” says Beatty, in a hotel press junket for Rules Don’t Apply, his first film as writer-director-producer in 16 years. “Maybe it’s more than luck. I’ve never had to go and do something for the money.”

Thanks to an early financial jackpot—Warner Brothers offered a 29-year-old Beatty something like 40 per cent of the grosses for 1967’s Bonnie and Clyde, thinking the film was a dud—he’s never had to shill for work. Instead, he’s curated a remarkable career as both a leading man (McCabe and Mrs. Miller, The Parallax View, Bugsy) and filmmaker (Dick Tracy, Heaven Can Wait, and Reds, for which he won a Best Director Oscar). Even his failures—the 1987 musical-adventure flop Ishtar leaps immediately to mind—are his own.

Rules Don’t Apply has pushed Beatty out of semi-reclusivity, marking his first major media appearance in almost a quarter of a century. A passion project decades in the making, the film tells the story of young Hollywood starlet Marla Mabrey (Lilly Collins), a devout Baptist who arrives in Hollywood to pursue a career in acting. She’s under contract to oddball film producer and entrepreneur Howard Hughes and quickly develops a rapport with Frank Forbes (Alden Ehrenreich), one of Hughes’s drivers, who is contractually forbidden from pursuing a relationship with any of his boss’s young, would-be starlets.

Beatty himself appears as Howard Hughes, attacking the role with madcap comic vigour. But he’s quick to clarify that, unlike Martin Scorsese’s 2004 film The Aviator, Rules Don’t Apply is not a Howard Hughes biopic. Nor is it even based on, well, facts. “The movie is more this story of these two kids who came to Hollywood around the same time I came to Hollywood,” he explains. “I wanted to tell a story about the consequences, whether comical or sad, of American sexual puritanism.”

Born to a Baptist family in Richmond, Va., Beatty took to Hollywood in the mid-1950s. He quickly shed whatever trace of religious puritanism his upbringing had instilled. In Peter Biskind’s bio Star: How Warren Beatty Seduced America, it’s claimed that he’s bedded nearly 13,000 women—a number that Beatty himself has rejected as not just inflated, but logistically impossible.

Rules Don’t Apply is an inauspicious return for Beatty. Sweet, slight, and shot through with the rosy charm of a classic Hollywood comedy, it’s not the kind of imposing chef d’oeuvre one expects when a director returns to filmmaking after a nearly two-decade absence.

In fact, it’d be easy to call the film a vanity project—made by the guy who inspired Carly Simon’s “You’re So Vain,” no less—but the tag doesn’t quite stick. At its best, the film feels like Beatty’s effort to showcase the emerging talents of stars Collins and Ehrenreich, an old Hollywood pro paying a favour forward. The film is also enlivened considerably by his wacko turn as Hughes.

“I was always amused by, and curious about, Howard Hughes,” says Beatty. “I felt that he lived in a very unusual way, because he could afford to live in a very unusual way. I never met him. I sometimes feel like I’ve met everybody in Hollywood. I’ve always wanted to have that character in a movie. It was not only comedic, but touching.”

Unlike Leonardo DiCaprio’s twitchy, manic Hughes in The Aviator, Beatty’s creation is clownish and cantankerous, the signs of dementia and mental illness creeping in at the edges of his eccentricity. In one particularly hilarious scene, Beatty’s Hughes attempts to seduce Collins’s aww-shucks ingenue by blowing an impromptu solo on a saxophone that seemingly materializes out of nowhere.

It’s a wonderful performance in part because it’s so at odds with Beatty’s own persona as suave seducer and polished charmer. If the media blitz around Rules Don’t Apply proves anything, it’s that Warren Beatty still has plenty to offer audiences—from a small-screen daytime appearance on Ellen to his big-screen command. Warren Beatty’s the rare guy whose effortless confidence and self-regard actually feel merited. Can you really be so vain when the songs really are about you?