Was Armageddon always this complicated?

Leave it to Hollywood eco-politics to gentrify the apocalypse

There could be worse ways to experience the apocalypse than with a party of stoned celebrities at James Franco’s house. For one thing, his epic art collection can be used to board up the cracking walls against demons and zombies. That’s the screwball scenario of This Is the End, a comedy written and directed by Canadians Seth Rogen and Evan Goldberg (Superbad). With a clubhouse of movie stars playing themselves—including Rogen, Franco, Jay Baruchel, Jonah Hill, Danny McBride, Michael Cera and Emma Watson—the film unfolds as a profanely funny showbiz parody. But with perfect timing, it also sends up a genre that has recently gone viral at the multiplex: the apoca-blockbuster.

“For us, it’s coincidental,” Rogen said in an interview. “But it’s in the ether. Probably just because people think the world is going end soon.” With its fires and earthquakes, Hollywood has always had the jump on Armageddon. “If it’s going to start anywhere,” added Rogen, “it’s gonna start there.”

While apocalyptic pictures are hardly new, what was once a contained sci-fi genre has spread and mutated to the point that the spectre of a busted planet is now a default premise for action blockbusters. In the past two months, we’ve seen civilization colonized by alien body-snatchers in The Host, buried by desert sands in Oblivion, frozen over by a new ice age in The Colony. And in After Earth, father-son astronauts Will and Jaden Smith get stranded on an inhospitable Earth 1,000 years after humans have ditched the ruined planet for a new home.

Aside from Oblivion, they were all dumb movies that met with box-office doom. But thanks to epic budgets, the apocalypse genre has become gentrified by A-list stars—and their eco-politics, with vistas of environmental collapse wrought by climate change, pollution and plague. In World War Z, opening later this month, Brad Pitt battles a global zombie pandemic triggered by a virus. And Elysium, due in August, imagines a future where the rich have emigrated to a pristine space station, while the 99 per cent remain stuck on Earth, a filthy hellhole of crime and poverty.

After the apocalypse, every action hero is an eco-warrior. Oblivion’s Tom Cruise—a futuristic fly boy patrolling the desert canyons of Manhattan—rescues a tiny plant from the wasteland and brings it home as an offering to his Stepford drone of a wife, who looks at it and screams, “It may be toxic!” In The Host, William Hurt plays a hard-ass, shotgun-toting patriarch leading a pocket of human resistance against alien rule, but he’s also nurturing a bounty of crops in a secret solarium under the desert.

A rebooted Superman is back to save our planet from annihilation in Man of Steel, which hits June 13. But this lonely refugee from Krypton’s own apocalypse is a throwback to a more earnest era. Typically, today’s blockbuster hero is just fighting to survive in the ruins of a world that’s already doomed. He’s usually up against one of two soulless forces: a cannibalistic rabble with bad breath and sharp teeth, or a dystopian regime run by aliens or robots. If the zombie apocalypse doesn’t get us, the robo-apocalypse will.

These two scenarios represent humanity’s classic fear of being devoured by the beast within or the machine beyond—the runaway id or the techno superego. Zombies are timeless. They are the cockroaches of horror, and show no sign of extinction; in fact, they’ve crawled out of the sci-fi ghetto to acquire universal cachet. Viscerally human, they are nightmare versions of our darkest instincts. Which is why we can’t get enough of them.

Zombies do make an appearance in This Is the End, but Rogen and Goldberg looted their best stuff from the orginal apocalypse script: the Bible. “All the stuff that happens in the movie,” says Rogen, “is from the Book of Revelation—the bottomless pit opening up, and the giant monster with seven heads. The joke when we were writing it was, ‘What if they’re right?’ ” But in This Is the End the monster has a giant penis, and eyes for Jonah Hill. And as people are sucked up to heaven via beams of blue light, the Rapture becomes the ultimate backstage pass. You know the end is nigh when James Franco is dying to see if his name is on the list. 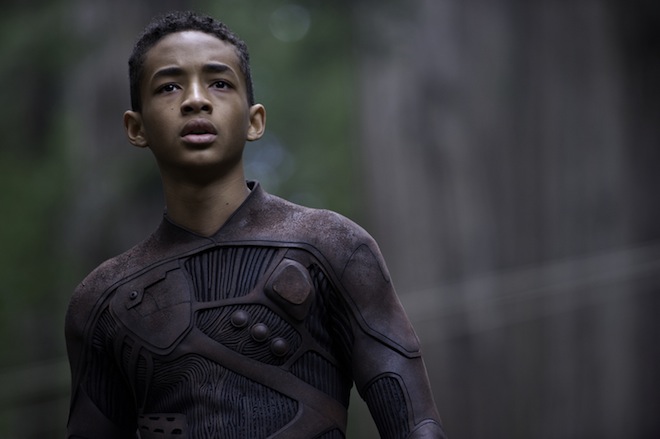