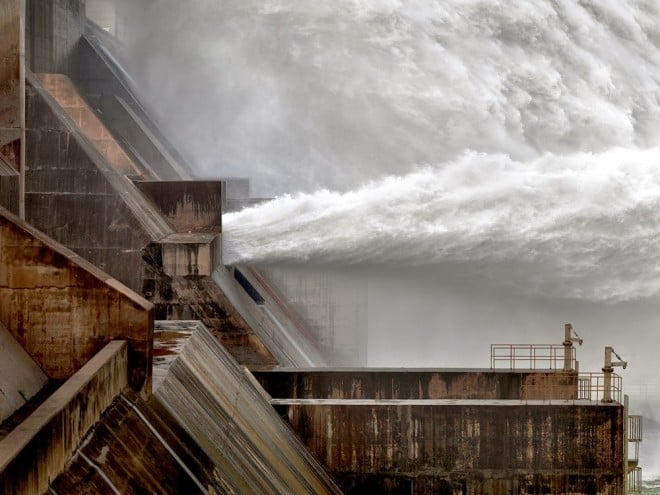 A Chinese dam in 'Watermark'

Watermark, a rhapsody of environmental horror from filmmaker Jennifer Baichwal and photographer Edward Burtynsky, has won the TFCA‘s $100,000 Rogers Best Canadian Film Award. The largest arts prize in the country, the was voted by members of the Toronto Film Critics Association, and presented by CBC personality Rick Mercer at the 17th annual TFCA Awards during a gala dinner Jan. 7 at the Carlu in Toronto. (Full disclosure, I’m TFCA President and the awards gala is my baby.) The other two finalists for the award each received $5,000 from Rogers as runners-up: Toronto director Matt Johnson’s first feature, The Dirties, a daring mockumentary about a pair of bullied students making a meta-film about a school shooting; and Louise Archambault’s Gabrielle, a tender romance about a pair of developmentally challenged young adults rehearsing for a concert with Quebec icon Robert Charlebois.

An epic portrait of our planet’s lifeblood, Watermark is the second Baichwal-Burtinsky collaboration to be named Best Canadian Film by Toronto critics. The first was Manufactured Landscapes (2006), which examined industrial blight through Burtinsky’s large lens, though there was no cash attached to the award at that time.

This marks the second year in a row that a documentary has received the TFCA’s top Canadian prize: Sarah Polley won it last year for Stories We Tell, and this week she’s on the Oscar campaign trail, picking up best documentary awards from the National Board of Review and film critics groups in New York and Los Angeles. Canada helped pioneer the documentary genre, and our filmmakers continue push the frontiers of the form: both Polley’s family memoir and the mesmerizing portrait of water by Baichwal and Burtynsky reinvent its visual and narrative style.  Welcome to the brave new wave of cinematic non-fiction.

For a complete list of TFCA Awards, go to torontofilmcritics.com

For my montage of all 26 films nominated by the TFCA, go to: 2013 TFCA montage

It was a good night for documentaries. Joshua Oppenheimer’s historic film, The Act of Killing, in which death-squad cronies blithely re-enact their brutal roles in Indonesia’s 1965-66 genocide, won the TFCA’s freshly endowed BMO Allan King Documentary Award, which came with a cheque for $5,000.  And Montreal filmmaker Mira Burt-Wintonick accepted a $5,000 prize from the inaugural TFCA Peter Wintonick Documentary Fund, created to honour the legacy of her father, a beloved doc veteran who died in November. Presenting the award, renegade director Bruce McDonald impulsively topped it up with a $1,000 donation of his own, which prompted Cineplex executive Michael Kennedy to match it with his own $1,000 pledge.

Another newly-endowed prize, the TFCA’s Technicolor Clyde Gilmour Award, puts a pay-it-forward twist on a lifetime achievement award for Canadians who have “advanced the appreciation of film.” This year’s honoree, veteran director Norman Jewison, was invited to select a young filmmaker to receive $50,000 in post-production services from Technicolor—he chose Jeff Barnaby (Rhymes for Young Ghouls), an aboriginal director from Quebec. Speaking in a video taped at his winter home in Malibu, Jewison expressed surprise that Toronto’s film critics even had an association, adding that he couldn’t remember getting a good review in his hometown.

Though its top prize has a fatter purse than the Giller, the TFCA gala tends to be more fun, mainly because it’s not televised. (Broadcasters Rick Mercer and Jian Ghomeshi have both urged me to keep it that way.) Hosted by TIFF Artistic Director Cameron Bailey, our gala was a champagne soiree with the subversive vibe of a comedy club, as wits like Mercer, Ghomeshi, Don McKellar and Kim Cattrall played it fast and loose at the podium.

McKellar and Cattrall, who co-star in the upcoming comedy series Sensitive Skin, were lucky to make it as they flew into Toronto’s frozen runways from New York and L.A. respectively on the day of the gala. Improvising from scribbled notes, and advising Cattrall to look up at the nonexistent teleprompter,  McKellar riffed on the odd optics of sponsorship as he reminisced about those dear, departed film biz luminaries— “Scotiabank Jay Scott,” “BMO Allan King” and “Technicolor Clyde Gilmour.”

But the most explosive performance came from a young upstart, Dirties director Matt Johnson, who accepted the $5,000 Scotiabank Jay Scott Prize for an emerging artist, as well picking up another 5K as a Rogers Award runner-up. First off, he turned to his namesake, moi, and offered “a huge thank-you to my Dad, Brian Johnson.” We’re no relation, but he probably had half the room convinced he was my love child, while my actual son, Casey, looked askance. Then, pointing out that $5,000 represents half the budget of The Dirties, Matt put a perverse spin on a bit of ancient TIFF lore by saying “I could buy a really big piece of hash with this!” Then he added, “That’s a quote from the original bad boy of Canadian cinema, Atom Egoyan, who I tried to model my career on. The guy is the maddest mother-f—–r I’ve ever met in my life. He walks around in Toronto with, no shoes, I’m not kidding.” The infamous “piece of hash” line, of course, comes from Bruce McDonald, not Egoyan, but just as some observers, including the Toronto Star’s Martin Knelman wondered if Matt really was my son, some may have thought this guy fresh out of film school was mangling history rather than bending it into sly satire.

The night was not without its heartfelt moments. I was blindsided by a lovely tribute from TFCA Vice-President Norman Wilner, who congratulated me for having just ended my tenure at Maclean’s after a 28-year run. (I’m no longer on staff, though I’ll maintain this blog on a more whimsical basis and be a Contributing Editor at the magazine.) Also, the evening’s climactic prize struck an emotional chord. In accepting her half of the $100,000 Rogers award from the company’s vice-chairman, Phil B. Lind, Baichwal, who seemed genuinely shocked to win, gave a sincere shout out to film critics, this increasingly endangered breed.

“Critical discourse,” she said, “raises the level of the conversation about culture. I feel with all of our work for the past 20 years, we’ve had a dialogue with the critics. Problems that we’ve had in our films that we haven’t really solved have been identified by critics, and things that really worked have been identified by critics. Rotten Tomatoes and the peer-to-peer stuff, it works, but it’s not enough.  There is a greater dialogue that encompasses the history of our medium. And that is the job of critics.”

I’ll get right onto that.