Welcome to the dollhouse: 'The Grand Budapest Hotel'

With an all-star cast, Wes Anderson makes his most entertaining film—and unleashes the comedian in Ralph Fiennes 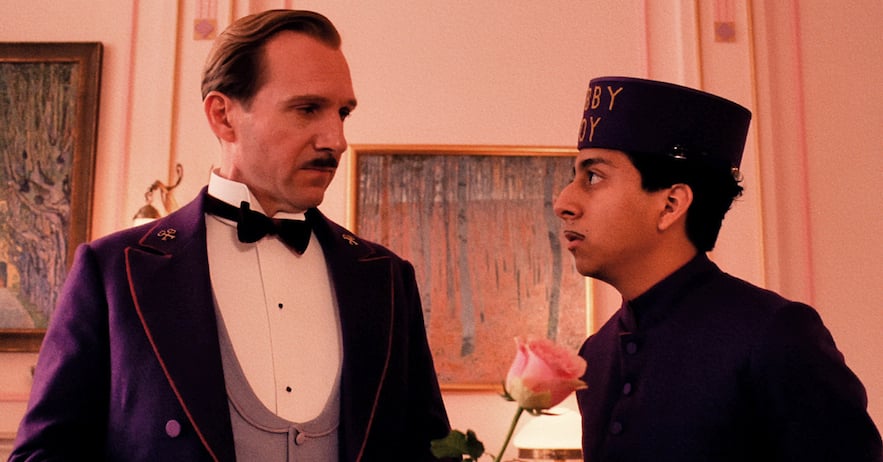 Wes Anderson has carved his signature into American cinema with a whimsical style all his own. From the Vietnam pyrotechnics of the school play in Rushmore, to the pup-tent puppy love of Moonrise Kingdom, Anderson gift-wraps his stories as worlds within worlds, homemade pageants of kooky artifice. And he seems blissfully immune to trends. While Hollywood doubles down on the manifest destiny of 3D, Anderson perversely flattens cinematic reality into confectionary dioramas, mille feuille layers of faux naïf make-believe.

With every film, the art house becomes his dollhouse. His movies seem to take place in an alternate reality, a world that is as Andersonian as Cronenberg’s is Cronenbergian. It’s an acquired taste, one that I began to un-acquire somewhere between the Gotham bubble of The Royal Tenenbaums (2001) and the Nemo-on-acid odyssey of The Life Aquatic With Steve Zissou (2004). By the time an all-too-prescient Owen Wilson popped up as bandaged suicide survivor in the railway escapade of The Darjeeling Limited (2007), I felt Anderson had lost his way. It’s not just that the pick-up-sticks narrative was so archly contrived; it presented such a maze of tones and tangents that it was hard to get grip on the characters, or believe they were anything more than the constructs of an over-active imagination.

With the exhilarating romp of The Fantastic Mr. Fox (2009), all of a sudden the director found his groove—by making a cartoon weirdly lifelike, rather than making life weirdly cartoon-like. Then, with Moonrise Kingdom (2012), it all came together. He emerged from a career of smoke and mirrors to craft an off-kilter coming-of-age tale that was unusually grounded. Instead of building the story around adults acting like children, for once he gave us children acting like adults, juvenile eccentrics playing house on a wild frontier. And even though their elopement was acted out in a mock Godard fantasy camp, the narrative framed tender moments of precocious romance with compositions that popped like still-life tableaux.

In The Grand Budapest Hotel, Anderson’s eighth feature, the director invests his trademark whimsy with spectacular ambition, and the result is the most richly entertaining film of his career. It’s certainly his most extravagant—in the scale of its cast, its staging and its story. Composed with the cut-gem focus of Moonrise Kingdom and fired with the zany, kinetic spirit of Mr. Fox, The Grand Budapest Hotel can be seen as an organic extension of his previous work. But his universe expands dramatically: the windows of this hotel are thrown wide open onto to a larger world. 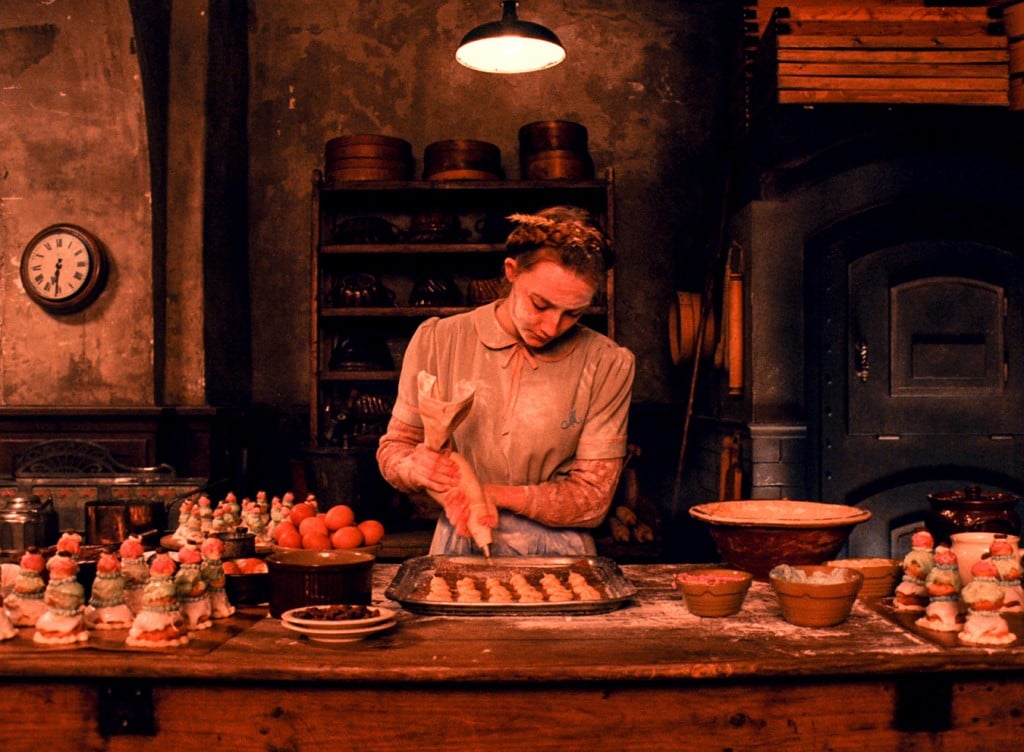 This hyper-stylized caper movie could give Baz Luhrmann a run for his money. It was inspired by Vienna’s Stefan Zweig, a famous writer and dandy from the first half of the 20th century, who counted Freud among his friends, and who, according to biographer George Prochnik, wore alligator shoes, wrote with violet ink and wrote an essay about Handel that he had printed entirely on silk.

In his spirit, the movie and its hero—an over-cultured concierge played with breathtaking panache by Ralph Fiennes—are ridiculously ornate. The Grand Budapest Hotel is, of course, not in Budapest. The story is centred in a fictional spa town in a made-up Alpine country called Zubrowka, which seems to float between a distant belle époque and the Nazi and Stalinist scourges of the 1930s. But Zubrowka also recalls any number of imaginary places of cinematic delirium, from the Marx brothers’ Freedonia (Duck Soup) to Guy Maddin’s Mandragora (Twilight of the Ice Nymphs). In its broad hotel corridors, there is even a glimmer of The Shining. And Anderson says he took some cues from the pre-Code comedies of the 1930s. But once again, the world he creates is uniquely his own. 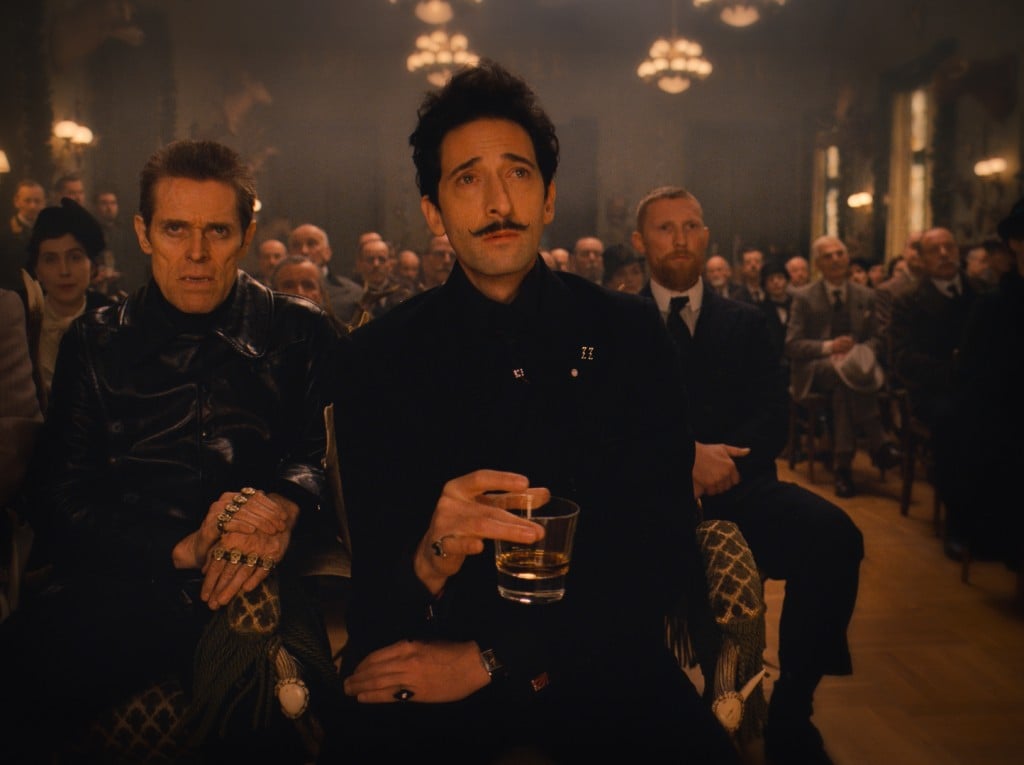 The story unfolds as a nested-doll narrative that spans three generations, each framed with its own aspect ratio. We run through a declension of storytellers, from the author (Tom Wilkinson) to the young writer (Jude Law) to a mysterious patron of the hotel named Zero Moustafa (F. Murray Abraham), our chief raconteur, who takes us back to the day he was recruited as a hotel lobby boy (Tony Revolori) by the flamboyant Gustave (Fiennes).

What triggers the action is the sudden death of an 84-year-old dowager countess named Madame D (Tilda Swinton), one of Gustave’s most cherished paramours in a harem that seems unrestricted by age or gender. The lady leaves him a priceless painting. When Gustave and his lobby boy show up to claim it, they run afoul of Madame D’s son, the villainous Dimitri (Adrian Brody), and the chase is on.

This madcap farce ricochets between world wars, and involves 16 characters, almost every one of them played by an A-list actor. They include Bill Murray (desk clerk), Edward Norton (police captain), Harvey Keitel (bald crime boss), Jeff Goldblum (Freud-like lawyer), Saoirse Ronan (Zero’s sweetheart, with a birthmark that looks like a map of Mexico on her cheek), and Willem Dafoe in Gestapo-black leather (a Lurch-like killer with a Luger).

Such a thickly populated confection could easily collapse under its weight. But Anderson choreographs the action, and the comedy, with balletic precision, while a kaleidoscopic array of scenic eye candy rolls by.

The film’s greatest revelation is Ralph Fiennes. Who knew that the star of The English Patient, who brought such sombre gravitas to so many period pieces, had such a light comic touch? His dialogue is a debonair as his dress, and he lets the pensées slide off his tongue with an air of wry decadence. Lines like: “There’s no point doing anything in life because it’s all over in the blink of an eye.” Or: “There are faint glimmers of civilization in this vast slaughterhouse of what was once known as humanity.” Or, even simple commands like “Take your hands off my lobby boy!”

This actor who once personified fascism to such chilling effect in Schindler’s List, also gets to make fun of Nazis. And it’s comforting to know that Nazis are once again fair game for farce.