From what I’ve been able to see so far, here are my favorites in no particular order. The list may grow as I screen more titles:

Ai Weiwei: Never Sorry  A superb choice for the opening night gala, this portrait of China’s most iconic artist and and activist is both intimate and monumental—like its subject, whose work ranges from epic installations to impish tweets. American filmmaker Alison Kalyman, now just 27, spent three years making this time-lapse picture of Ai Weiwei on the front lines of free speech in China. She’s the classic example of a documentary-maker who makes sure she’s in the right place at the right time, and never lets go of the story—doing due diligence to her subject without losing perspective.

2. Her Master’s Voice
Who knew ventriloquism could be so cool. We associate it with vaudeville, and the creepy/corny side of stand-up comedy. But in the hands of British actress and comedian Nina Conti, hand puppets acquire a whole new cachet. Conti was so bummed out by the bad image of her profession, she was ready to give it up. Then with the death of her mentor, and former lover, Ken Campbell, she inherited a brood of orphaned puppets. Conti takes them on a pilgrimage to a ventriloquist’s convention in Kentucky—and a museum that serves as their final resting place. Puppet cemetery—prime Errol Morris territory. But because Conti is directing the film, we view her eccentric art from the inside-out as she improvises a witty, often profound self-exploration through the multiple personalities of eerily real little friends. Her Master’s Voice puts a whole new spin on the talking-heads documentary.

3. We Are Legion: The Story of The Hacktivists If Nina Conti restores the dubious image of ventriloquists in Her Master’s Voice, director Brian Knappenberger does the same for computer hackers. This is not a portrait of Wiki Leaks and Julian Assange, although they figure in it. It’s  the coming-of-age tale of the worldwide underground collective known as Anonymous, which morphed from an outlaw quirk of pop culture into a significant political force—”the Internet’s first army.” The film shows how a bunch of basement geeks first got a sense of their own power by making gleeful, indiscriminate mischief on the Internet, and how they evolved into a movement with a mission. Their first significant target was the Church of Scientology. With their anonymity, they found the naive nerve to criticize and harass the Church, which had intimated more visible opponents into silent submission—though the hacktivists later realized they were not immune to harsh legal consequences. The movement truly comes into its own in demolishing firewalls put up by censors in Tunisia and Egypt—playing a crucial role in the Arab Spring.

4. The World Before Her This ambitious film was co-produced by Canada, Germany, the U.S. and the U.K., but it’s set in India, and focuses on the  the aspirations of desperate young women who are caught in strange limbo, somewhere between the glass slipper and the glass ceiling. The narrative toggles between two groups of women, who are not as dissimilar as they might seem—20 contestants competing in the Miss India pageant after a month-long beauty boot camp in Mumbai; and submissive sisterhood of recruits  undergoing ideological and military training at a camp run by the women’s branch of Hinduism’s militant fundamentalist movement. The women in the pageant, who have their hearts set on Bollywood stardom, aren’t just Bombay Barbie dolls. Looking for a way out of second-class citizenry, they’re fiercely ambitious. The scenes inside the camp, the first ever allowed on camera, are eye-opening. What’s remarkable is that both groups of women are desperately seeking some kind of emancipation via highly submissive rituals.

5. The Final Member If Hot Docs had a prize for extreme quirkiness, it would be hard to beat this stranger-than-fiction gem, a Canadian film directed by Jonah Bekhor and Zach Math. Sigurdur Hjartarson has spent almost four decades amassing penises and preserving them for his Icelandic Phallogical museum, where whale members protrude from wall plaques like elephant tusks. The dedicated curator has been able to get his hands on a specimen from almost every mammalian species but one: homo sapiens. The documentary’s narrative hinges on the story of two rivals who want to donate their genitalia: a 95-year-old Icelander named Páll Arason, a legendary Casanova who’s longing to immortalize his manhood, which is tragically shrinking as he waits to die. His rival is a patriotic American who calls his penis Elmo, and wants to make it famous by donating it while he is still alive. Hjartarson, who has never killed an animal or taken a penis from a living one, finds the offer disconcerting. The Final Member is wonderfully weird and funny. But it’s also beautifully shot, and what’s surprising is how comedy gives way to a bittersweet and strangely moving portrayal of an aging man wondering if he’ll receive that last donation before having to make it himself at his own death.

6. Low and Clear This is another tale of animal trophy hunting, but it would be a mistake to call a movie about fly fishing. It’s the story of two longtime fishing partners, both Americans, who have drifted apart and reunite for a last hurrah on the cold rivers of British Columbia. We do see a lot of fishing, but it’s really a buddy movie that hinges on delicious rivalry. J.T. is a purist who believes in the perfect cast, and the practice of the sport as an avenue to some kind of New Age divinity. The problem is, he’s not catching fish. His friend Xenie is a garrulous stoner who cares about nothing but catching fish, and he pulls them out of the water one after the other. Both are catch-and-release guys, but Xenie takes a photo trophy of everyone; he has a collection of 50,000 snapshots. Directed by Kahil Hudson and Tyler Hulghen, the film unfolds as languid escape, wired with a high-test line of tension between its two protagonists.

7. Beware of Mr. Baker  The title could not be more apt. It comes from a sign posted at the gate of the South African compound that, for a spell, is home to  legendary rock drummer Ginger Baker, along with his 39 polo ponies and mail-order brided. But the warning could also apply to filmmaker Jay Bulger, who has his nose broken when Baker lashes out at him with a polo stick in the opening scene. Baker insults Bulger at every turn, but the frisky filmmaker (who first profiled him for Rolling Stone) follows his chain-smoking, morphine-addicted subject with the perseverance of a war correspondent. The result is a fascinating biography of a self-destructive force of nature who makes Keith Richards look like a choirboy. Accessorized with witty animation that depicts Baker as a Viking who burns and pillages his way around the world, the film makes a solid case that—with a seminal influence from Africa—he invented rock’n’roll drumming. Those who confirm that on camera include drummers from the Stones, the Police, Rush and the Grateful Dead, along with Eric Clapton, Steve Winwood and Carlos Santana. The irony is that Baker’s original, and final, dream was to play jazz. 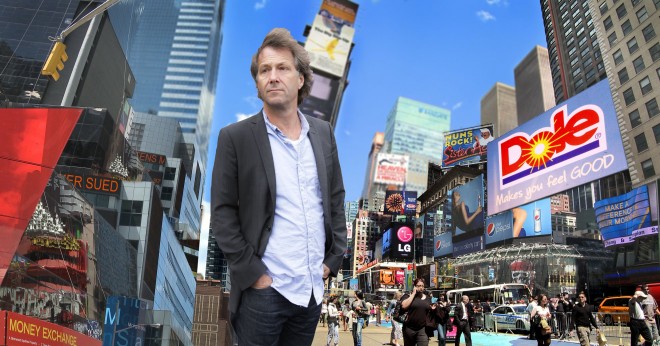 8. Big Boys Gone Bananas! This David-and-Goliath doc tells  a remarkable story of a small-time filmmaker who fights back against a mammoth corporation that tries to muzzle him. In 2009 Fredrik Gertten was all set to premiere his documentary Bananas! at the Los Angeles Film Festival. The film chronicles struggle by farm workers against Dole. The food giant responded with an aggressive media and public relations campaign to quash the film’s release and discredit the reputation of the filmmaker. Retaliating against Dole’s repeated threats of legal action, Gertten launched a counter-suit, while documenting the whole process for another film, which became Big Boys Gone Bananas! It’s a lesson in how, with a well-orchestrated boycott, a corporate bully can be brought to heel. Not to mention a lesson in how to stretch a documentary meal—by producing two films from the same material.

9. Beauty is Embarassing Director Neil Berkeley tracks the giddy art of Wayne White’s life and art. This Tennessee maverick began his career as a puppeteer, who got his entree into the big time as an Emmy-winning creator of Pee-Wee’s Playhouse. As White recalls, ” It was a dream job, sitting a room, smokin’ weed . . . I didn’t know s–t about building puppets. I was just doing it in my own crazy, funky homemade way.” His “way” won him a couple of Emmys, as the show rocketed from the its ramshackle origins in the drug labs of the New York art scene to Hollywood success, only to be cancelled after the arrest of its host, Paul Ruebens. In the wake of a drug-fueled burnout, White retreated to his Tennessee home, where he reinvented himself with a a series of pop-art paintings that began as a kick-ass stunt—painting profane, block-lettered slogans over thrift-shop landscape paintings. It generated his second career as an acclaimed folk/pop artist. This doc is virtually a self-portrait, framed by White’s own one-man stage show show. But it’s a fine example of how far the camera can extend the palette.

10. Ethel Emmy-award-winning director Rory Kennedy, the 11th and eldest daughter of Robert and Ethel Kennedy, uncorks a treasure trove of home movies and archival material in this affecting family memoir. For the first time in 30 years, Ethel Kennedy speaks on camera, and she’s both sharp and candid. Make no mistake, this is a family vanity project, an utterly affectionate portrait of a family without a whiff of scandal. But once you accept that, it allows a privileged glimpse into the clan behind the Camelot myth. Although the film is titled Ethel, and the filmmaker has us see the story through her eyes, above all it’s compelling portrait of Robert Kennedy, the former attorney general and senator whose assassination seemed to annihilate America’s last hope for an un-cynical democracy. More shy and and more vulnerable than JFK, Bobby is downright adorable, which now seems like such a strange quality for a politician. This film is also the memoir a family basking in the early and innocent self-portraiture of home video, decades before YouTube made us all so self-conscious. It seems no touch football game went undocumented. The ultimate nostalgia trip.

In a satirical gem of “performance journalism” Danish director Mads Brügger unveils the outrageous corruption among businessmen posing as diplomats in Africa—by posing as a businessman posing as a diplomat in Africa. Through a black market broker, Brügger obtains a diplomatic passport and papers as a Liberian diplomat. Travelling to the Central African Republic, he masquerades as an entrepreneur planning to set up a match factory as a cover while he buys diamonds to smuggle out of the the country under diplomatic cover. “Being a diplomat at heart,” he says, “I wanted to get my hands on as many diamonds as possible.” He describes the Central African Republic as “a Jurassic Park for people who long for Africa of the 1970s. If the Congo was the Heart of Darkness this is the appendix.” Much of the documentary is filmed with hidden cameras. As Brügger conduct meetings with shady officials, handing them “happiness envelopes” of cash bribes, and acquiring a pair of Pygmy assistants, the film unfolds as dark comedy that shows us the underworld lurking behind the mask of diplomatic immunity. The director’s absurd posture—the white colonial sporting a cigarette holder, dancing in his suit with a tribe of drunken Pygmies—is a cringe-worthy parody. But everyone buys it. The Ambassador‘s cloak-and-dagger escapade is hilarious, and at times harrowing as Brügger’s International Man of Mystery,  a debonair hybrid of Herzog and Sacha Baron Cohen, discovers . . .  the horror, the horror.