The film festival has been blissfully free from the City Hall circus. For the sake of the city, let's keep it that way. 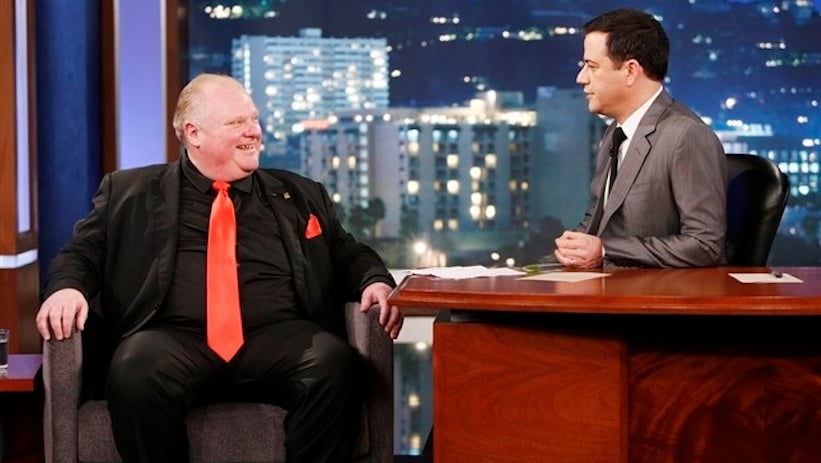 For the past nine days, the Toronto International Film Festival has been blissfully free of the Rob Ford circus. Although there were fears that the crack-smoking mayor might stumble into the proceedings—partying at the Soho House, perhaps? Choking on popcorn while watching the latest Oliver Assayas film?—the walking, talking fiasco has stayed about as far away from the festival hub as possible. For this, TIFF-goers were grateful.

Local movie fans, critics and industry representatives could enjoy everything the film festival has to offer without having to constantly apologize for their city’s ostensible leader. The topics discussed while waiting in line for the next Scorsese or Godard focused on films, and commerce, not the never-ending reality show at city hall.

Sure, a visiting movie star or two would make, ahem, cracks about Jimmy Kimmel’s BFF, momentarily pulling everyone’s attention away from something that Toronto should be celebrating, not hiding from in shame. Michael Moore, for instance, said he could run for mayor if all he needed to do was defeat Ford. “The first thing I said to Rob Ford was you and I need to go for a long walk, with ankle weights, before you have an ankle bracelet,” said the documentarian, in town to celebrate the 25th anniversary of Roger & Me. Even Bill Murray got pulled into the shtick, saying Ford “still had a shot.” For the most part, though, TIFF and the Rob Ford show existed in separate universes.

That hermetic bubble was punctured slightly on Thursday with the news of Ford’s hospitalization for a possible tumour, and thoroughly punctured Friday, when Ford announced he would pull out of the mayoral race in favour of a council run, with his brother Doug taking up the Iron Throne challenge. Suddenly, any talk of art or culture was thrust aside to delve into the trials and tribulations of Canada’s longest-running spectacle.

It would be wrong, though, to say the festival was upstaged by a drama that even fiction could not create. For the most part, TIFF is finished for another year, with most of the international press and the bigger Hollywood stars having flown the coop earlier in the week. The big premieres are over, and the remainder of the festival will act as a catch-up, one last chance for everyone to watch the titles that generated the most word-of-mouth buzz.

Still, it is a frustrating situation for any filmmakers who remain—or anyone who wishes to put the divisive politics of the Ford brothers aside to discuss more enlightened topics. (Here’s the obligatory part of the column where I say, yes, of course I hope Rob Ford recovers from whatever medical problems ail him. But the caveat to that statement is that no city should have to endure being thrust into his hourly soap opera of a life. Exit Toronto politics, Mr. Mayor—that includes the council race—and we’ll gladly leave you alone, too.)

That last sentiment might strike some as elitist: Who would want to discuss silly little movies when a man—our elected leader!—is facing the battle of his life? Well, when that man has poisoned a city and shown little interest in furthering its international reputation—a cause that TIFF is central to—then, yes, I would rather discuss a multi-billion-dollar industry that enlightens, entertains and informs society than an angry, vicious little man who has done nothing but harm a city’s standing.

As the news broke Friday afternoon, I was waiting to watch a TIFF screening of Phoenix, a Second World War drama by German director Christian Petzold. Before the lights went down, there was a substantial amount of chatter about the latest Ford developments, including a few toxic jokes told at the city’s expense. Once the end credits rolled, though, I was heartened to hear moviegoers eagerly dissect not the future of the Ford campaign, but the film’s intense knockout of an ending. If the rest of the world wants to worry about what’s next for the Fords, that’s fine. I’ll be at the movies.