As Brad Pitt races to save the world, the question is: can he save his movie? 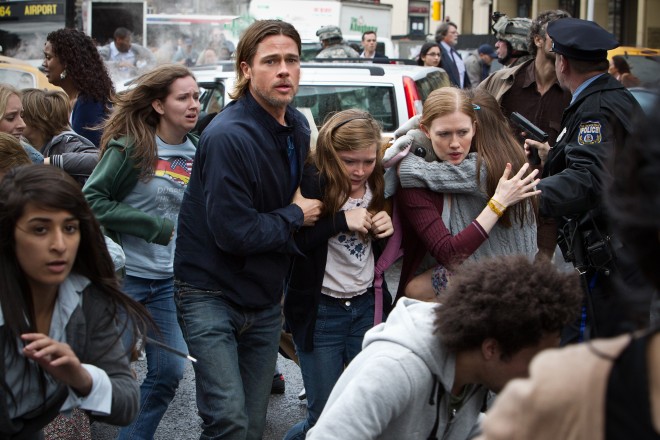 First the good news about the zombie apocalypse. After the onslaught of space aliens, killer robots and men of iron and steel, it comes as a tonic. Even if it’s grim medicine. Sure, World War Z is yet another blockbuster death rattle by computer graphics, but for once the enemy is organic—a swarming mass of infected, voracious, flesh-eating humanity. Also, this is no theme park ride; World War Z delivers an intense blast of gritty, seriously scary drama. And though I’m no expert on the relative merits of undead cannibals, these ones seem to have got an upgrade. Compared to the Romero-style zombies, who are notoriously slow-moving and lugubrious, these could be zombies on crack. Faster, higher, stronger, they move like a mass of rabid jack rabbits, but lead with their teeth like piranhas—as if propelled forward by the sheer force of gnashing.

Unfortunately, much of the film moves with the same manic, jittery pace. Which poses a problem because it’s in 3D. World War Z offers the most gratuitous of use of 3D I’ve seen in a while. There’s no reason for it, aside from charging higher ticket prices to defray the costs of a $200-million movie. And there are lots of reasons it should not be in 3D. Kinetic action, jerky camera movement and fast-cutting—the movie’s default style—become visual torture in 3D. The first act is especially hectic. As zombie pandemonium engulfs downtown Philadelphia, we descend into shaky-cam hell as hero Gerry Lane (Brad Pitt) scrambles to escape cannibal gridlock with his family. When the chase goes indoors, all the fluorescent lights stutter madly (as they inevitably do at some point in every action blockbuster), and it’s like being trapped in an ’80s nightclub on a bad drug.

But then I was stuck in a bad seat, on the side down front. Which is lethal for 3D. (Like most studios these days, Paramount reserves no seats for critics and jams its preview screenings with eager fans who show up early.) After the first half hour, I found a seat near the back of the theatre, and the movie became tolerable. Also, the action settled down: by the final act the action de-escalates from mad spectacle and becomes a claustrophobic suspense thriller, as the story moves to a laboratory maze of the World Health Organization.

Adapted from the Max Brooks novel World War Z: An Oral History of the Zombie War, the movie was directed by Marc Forster (Quantum of Solace) for Brad Pitt’s production company, Plan B. Unlike the novel, which unfolds from myriad points of view, the narrative is exclusively anchored by Pitt’s character, Gerry, an ex-U.N. investigator who is dragged back into harness to save the world. Leaving his wife and children in military custody back home, Gerry boards a plane to embark on a global mission to find a cure for the zombie virus. Gerry has no actual superpowers. But as a veteran of hotspots from Kosovo to Rwanda, he’s a Swiss Army Knife of heroic capability, able to do just about anything. He even leaves the world’s top virologists in the dust with his shrewd hunches. Science is no match for the common sense of a Hollywood star.

Pitt is a fine actor, but no substitute for a strong story. Such a flawless character becomes bland. He’s a larger than life version of Humanitarian Brad, without the foil of a dynamo like Angelina Jolie. Gerry’s nondescript wife (Mireille Enos) spends most of the movie waiting in the wings. On the road, Gerry picks up a cute young Israeli solider (Daniella Kertesz) and attends to her wounds like a saintly patriarch, but there are no sparks. He’s too good for that; besides, who has time for sex during the zombie apocalypse? Amid the mayhem, there isn’t even room for a supporting role with any heft.

Despite Pitt’s shapeless character, and a choppy narrative scarred by its own cannibalistic ravages—the production was a nightmare of cost overruns, creative feuds, rewrites and reshoots—the drama still has some originality and force. The spectacle of the zombie hordes is most impressive, especially when they climb over each other like ants to scale a high security wall in Jerusalem. The spectre of a pandemic that turns us into nightmare versions of ourselves has familiar ring for anyone who has been overcome by road rage. And the movie plays more like a grown-up thriller than a horror movie, as Forster consistently cuts away from the gore. Of course, there’s a reason for that: zombie movies are traditionally R-rated, and a picture on this scale requires a PG-13 rating. But I was grateful for it—and for the intimate suspense of the movie’s final act—an admirable choice after the filmmakers nixed a more typical finalé that would have smoked the zombies in a blockbuster battle scene. We’ve already seen enough of those.

Like it or not—and I don’t love it—World War Z does get under your skin. As you leave theatre, and merge with the audience funneling to the exits, you might find you’ve developed a sudden allergy to crowds.