Videos can be produced relatively quickly, and have proved liberating for musicians and directors looking to engage with current events—and even steer the conversation 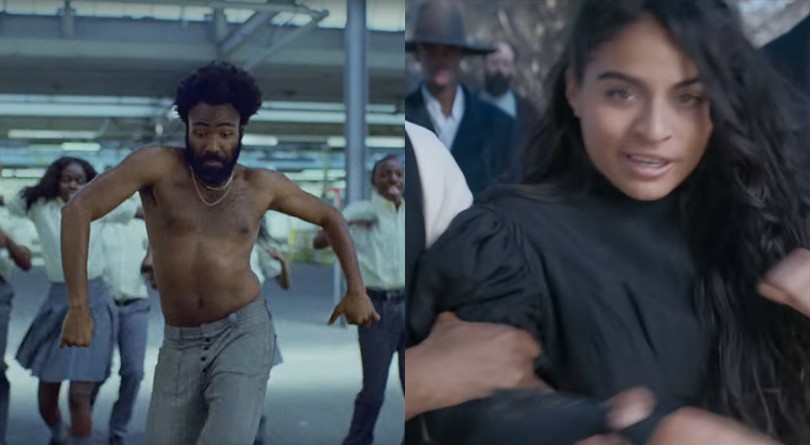 Childish Gambino’s “This Is America” may be the #1 song in Canada, but it’s the video that’s really on our minds. With its out-of-nowhere gunshots, manically gleeful dancing, rioting, and enigmatic cultural commentary, it has spawned so much conversation that even the New York Times has published a listicle about the eight “sharpest insights” so far.

Gone is the age when music video could be derided as a secondary art form, a commercial for a song; video streaming draws revenue, too. This changed economic rationale, and the fact that videos can be produced relatively quickly, have proved liberating for musicians and directors looking to engage with current events—and even to steer the conversation.

In a politicized culture, it’s no surprise that videos are increasingly addressing social and political issues, and in much richer and more complex ways than did the clips accompanying the earnest charity-single singalongs and the bludgeoning protest anthems of yesteryear. Take, for instance, the brand-new video by Toronto singer and songwriter Jessie Reyez, who won the 2018 Juno for Breakthrough Artist. The song, “Body Count,” is a feisty paean to free love. She writes, in an email, “whether you sleep with zero or ten people, whatever you do with your body is your own goddamn business.” In the video, she sings the lyrics in 19th-century dress, while being manhandled by villagers and then burned at the stake.

As with Gambino’s video, the effect is shocking, but also multilayered: deliberate anachronisms evoke modern-day slut-shaming. “It’s about the uphill battle as a woman because we have to deal with shame more than men,” says Reyez. As we watch the villagers watching Reyez’s character burn, we’re led to wonder who’s complicit, who’s opposed, who’s responsible, and what it means that at the end, through the ashes, we can see a beating heart. YouTube, now by far the biggest platform for music videos, is giving “Body Count” a significant marketing push. The video’s director, Peter Huang, is “excited to release it, and I think it’s because the video leaves a lot of room for people to have conversations—the conversation will drive more viewers.” This is an important point about the economics of 21st-century music: while songs profit from being added to a multitude of playlists—and so controversy might narrow their appeal—video is dependent on clicks and shares. In other words, the more controversy, and the more conversation, the better.

But there’s more to the likes of “Body Count” and “This Is America” than that. “From a creative standpoint,” says Huang, “it’s always nice to see people tolerate ambiguity and maybe see different perspectives in social issues.”

READ MORE: On Beyoncé’s ‘Lemonade’, the personal is political

At its best, music video embraces contradiction: In “This Is America”, Donald Glover, as Childish Gambino, is both a hero and a villain, a predator and prey, grotesque and sympathetic. He has refused to unpack the imagery he uses; he seems to be decrying gun violence, escapist entertainment, and racism, but without making bald statements. By using concrete images in an abstract way, he opens up new ways of thinking about well-worn subjects.

In a time of kneejerk outrage, art can encourage us to actually wrestle with ambiguity. And perhaps we’re becoming more attuned to doing so. Louis Calabro, founder of the Prism Prize (a juried annual award for best Canadian music video), says, “We’ve been shifting as audience members for the last five years and learning how to watch things again. I think that has to do with the duration of content, because [music videos are] bite-sized; it’s about binging. You understand the idea of devoting time to art.” For Calabro, the move away from watching videos on TV and towards the internet has made viewers more active consumers.

What’s more, in an era of ever-shrinking record-label budgets, necessity has proved a liberating influence: the fewer the bean counters, the more directors feel emboldened to take risks. Certainly, this is the case in Canada. Among the nominees for this year’s Prism Prize (awarded in mid-May) were electronic artist CRi’s “Rush (feat. Ouri)”, a mini-documentary about the mining town Fermont, Que., where men outnumber women by 100 to 1; Alice Glass’s “Without Love”, whose atmosphere of decadent suffocation (courtesy of celebrated director Floria Sigismondi) alludes to Glass’s allegations of sexual assault against her former bandmate in Crystal Castles; Reyez’s own “Gatekeeper”, where she depicts herself in a blurred, hellish environment being belittled and sexually harassed by an artist (also drawn from an alleged real-life experience); and the eventual winner, Charlotte Day Wilson’s poetic, single-shot “Work”, in which the Toronto neo-soul singer appears as one of 115 women, genderqueer, and trans people descending a subway escalator, as though on their way to work.

“Work” appears simple, but it’s rich in associations, and it can be seen as a subtly powerful statement about gender. “There are so many music videos where women play minor or really objectified roles,” says Wilson, “and to reverse those roles is very powerful.” She found that its making produced an “amazing community moment. It’s unusual to be in a space with so many women and so few men. We all felt the energy, and everyone had a level of pride in their expressions when they came down [the escalator].” Says Fantavious Fritz, its director, “I don’t want to say [it was] a social experiment, but it was a way to unify people.”

RELATED: This year’s Grammy Awards are more relevant than ever

In a show of solidarity, the video’s release was timed to coincide with the Women’s March in Washington, D.C. in January 2017. And in his emotional Prism Prize acceptance speech, Fritz said, “Being an ally is a verb, not a noun.” It’s significant that so many of the artists exploring social and political issues in music video—be they artists or behind the camera—are women. “There seems to be a sense of freedom now,” says Kirsty Fairclough, associate dean of research and innovation at the University of Salford in England and co-editor of the 2017 book Music/Video: Histories, Aesthetics, Media. “I wouldn’t say the misogyny that pervaded the music industry for so long is disappearing, but it’s easier to control your own image.”

The release of Beyoncé’s video for “Formation,” in February 2016, appears to have been a watershed moment: It was artistically bold, politically committed, feminist work by a hugely popular artist, working with a female director (Melina Matsoukas). Its images are provocative and charged—such as Beyoncé’s sinking into a flooded New Orleans on top of a police car. Fairclough describes her experience of teaching music and pop culture before and after Lemonade, the hour-long film from which “Formation” emerged: “Five years ago, I used to say, ‘OK, who’s a feminist in the room?’ and you’d get half a dozen hands up. Now, virtually everybody has got their hands up and we talk about Beyoncé and the impact that she might have had. Some people say, ‘She’s just putting some ideas out there in the world, —she’s selling herself and her music.’ But a lot of young women have come to feminism through her.”

As Fairclough points out, the social and political references Beyoncé makes dovetail with her incredibly successful branding. “She performs at the Super Bowl and drops a video, and suddenly, we’re all rushing to her website to buy the hoodies or tote bags [that quote “Formation”] with ‘Hot sauce in my bag.’ That’s how clever she is. It looks to me like Donald Glover is doing a similar thing.”

Indeed, Glover dropped his “This Is America” video on the day when he also hosted Saturday Night Live, and as he promoted both his film Solo: A Star Wars Story (in which he plays Lando Calrissian) and the second-season finale of his TV show, Atlanta.

While praising “This Is America,” Peter Huang sounds a note of caution for those who would follow in Gambino’s footsteps. “I’m a little wary that it’s trendy to take on any sort of activism. Though it’s good to be conscious of problems, at what point are we just spinning our own wheels to make ourselves feel good, because we’re aware that the problems exist, and that we’re woke? Is it enough to be woke and tell other people that they’re not? ‘Cause that’s just narcissism.”

Artists who signal “wokeness” can also risk sounding off-note. In 2017, Katy Perry trumpeted her newfound political consciousness, but unlike Glover and Beyoncé, who resist analyzing their work, she seemed desperate to spell out the meaning of her “purposeful pop.” Her hold on the charts slipped, and the sledgehammer satire in her video for “Chained to the Rhythm” didn’t help.

Sometimes videos come into their own when preconceived agendas are thwarted. Montreal director Didier Charette had anticipated exploring the well-known social problems in Fermont when shooting the video for CRi’s “Rush (feat. Ouri)”, but in the end, he found himself guided by the people he spoke with to show the positive side of their lives. The result evocatively juxtaposes the uncertainty of the modern-day gold-rush town with the euphoria of riding snowmobiles in -60C and the song’s rush of drum-and-bass adrenaline.

Charette was also nominated for Best Director at the MuchMusic Video Awards, and “Rush” is a noted Canadian contribution to what Huang has called “a second golden age” of music video—after the initial, less politically charged, major label-funded burst of creativity in the 1980s. However, the future is uncertain for a new generation of Canadian artists looking to make their own creative videos.

Charette and “Rush” were funded by MuchFACT, the Canadian music video fund that supported seven of this year’s 10 Prism nominees, and that was once required by the CRTC as a condition of MuchMusic’s license. It was discontinued by parent company Bell Media in September, after 33 years, a victim not so much of Bell Media’s lack of interest in videos—the company still sponsors the Prism Prize—as the fact that videos are no longer a staple of legacy TV. And while the advent of YouTube has made wide viewership more attainable for risk-taking independent artists working with budding directors, there’s now a funding gap that the likes of FACTOR (the Foundation Assisting Canadian Talent on Recordings) and cash-strapped smaller labels look unlikely to be able to fill.

At the Prism gala, many a director was lamenting the loss of MuchFACT, and wondering how a younger generation might cope, especially among those outside the epicentres of anglophone Canadian media. “Budgets are changing drastically,” says Charette, “and in Quebec, there’s no money.”

Eager to do what they can, Fritz and Charlotte Day Wilson announced at the Prism gala that they would split their $15,000 winnings between a donation to a women’s shelter and what they are calling the “Work Fund,” a one-time grant for a female music video director.

For now, admits Neil Haverty, the Prism Prize’s Creative Director, “If you want to fly off a building, then you probably can’t, so you have to find a way to tell it smaller. The message, the story, becomes super-important.”

His Prism counterpart, Calabro, is cautiously optimistic that MuchFACT will one day be replaced: Music video, he says, is “too powerful a medium for people to shy away from. It’s in everyone’s interest to keep this creative form alive.”