Ballet is back and it's lit

Among the National Ballet of Canada's first productions this fall is Angels’ Atlas. Siphesihle November, principal dancer, walks us through a pinnacle moment in the award-winning production. 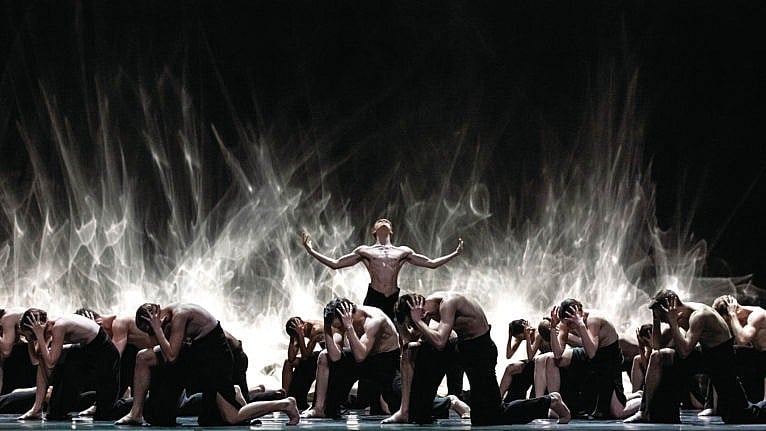 After a year-and-a-half-long pandemic hiatus, the National Ballet of Canada returns to the stage and in-person audiences this fall. Among its first productions is Angels’ Atlas, the evocative modern ballet choreographed by Crystal Pite. Here, the company’s newest principal dancer, Siphesihle November, walks us through a pinnacle moment in the award-winning production.

The scene above takes place near the end of the ballet, when the score’s electronic music is at its most dynamic, rising to a riotous whirl of movement, light and sound. “This is taken from the peak of the pulsing section. We’re all doing quick movements, then all of us are on the floor,” says November. “One dancer rises up—it’s almost like he’s being touched by something. We’re all moving as a group, and then something happens that calls to him. It’s almost like an enlightenment. He rejoins the group very shortly after.”

Light plays an integral role; the backdrop is moody and alive with the interplay of light and dark. Pite’s partner, Jay Gower Taylor, worked with lighting designer Tom Visser to manipulate reflections manually rather than digitally. The result is powerful for the audience as the light, music and dancers move as one, but November offers a surprising insight. “The backdrop lighting is absolutely beautiful, but we don’t get to see it,” he says. “I’ve only seen rehearsal footage.” The lighting becomes part of the whole, almost like another member of the company. Here, it intensifies as one dancer breaks from the group.

For the score, Pite commissioned composer Owen Belton, who paired electronic music with voices, clicks, bells and a heartbeat. The ballet also incorporates slower choral pieces by Tchaikovsky and contemporary composer Morten Lauridsen. “The music [completes] the choreography for me as a dancer,” says November. “There is this pulsing, especially in the large movements at the end, when the lighting is at its peak, movement-wise. Then you end on this sombre note. It all complements each other beautifully.”

November joined the company in 2017 and met with Pite immediately. “I was lucky that in my first week at the National Ballet, Crystal was there rehearsing for a performance of [her award-winning ballet] Emergence,” he says. November was cast in the show, and to be dancing a new Pite ballet four years later as a principal dancer is a full-circle moment for him. “It’s an honour. To me, Angels’ Atlas is about how we are in this space only for a short time,” he says. “We move as one, we separate and come together. It’s about the beauty of the whole movement of life.”

FILED UNDER: Anatomy of a Scene Editor's Picks National Ballet of Canada