Neil Young vs Spotify, and the gathering storm

Terry Glavin: The battle between musician and streaming giant was neatly settled. But it is part of a much bigger, unfolding crisis over the role of truth and facts. 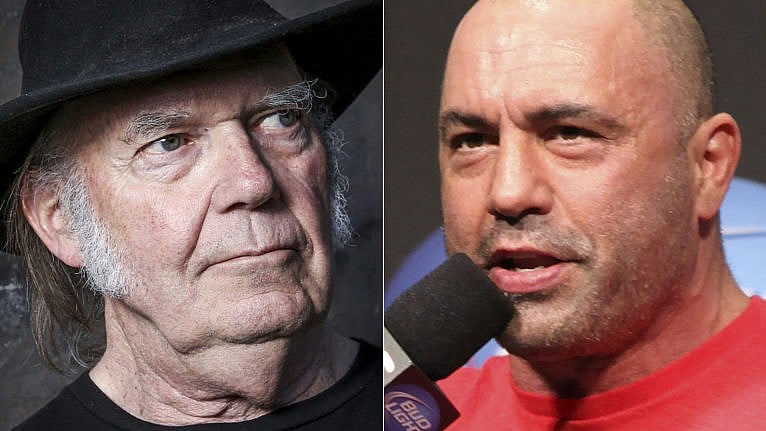 The fight the legendary hippie singer-songwriter Neil Young brought to the music-streaming giant Spotify on Monday over the privileged place it provides a wildly popular podcast by the contrarian comedian and former wrestling colour-commentator Joe Rogan appears to have ended as quickly as it began. But the wider war is gathering steam.

“I am doing this because Spotify is spreading fake information about vaccines,” Young said. Either Rogan goes or I go, he told the Stockholm-based audio-streaming giant. On Wednesday, Spotify responded: Off you go, then. By Thursday, Young had decamped with his entire 45-album backlist and all his bread to Apple Music, while Rogan’s big-tent circuses, with their sideshow freaks and thrill rides, will carry on, as before, with Spotify.

It all sounds so frivolous, but it isn’t, because the public-policy hostilities arising from our common captivity in the grip of COVID-19, now in the first days of the third year of SARS-CoV-2, are only becoming more pronounced with every passing day. Millions are dead, the stricken keep on dying, it’s becoming increasingly difficult to discern what the basic facts are and the uproars are unfolding in the midst of what has been called a “crisis of epistemology.”

RELATED: Misinformation from the U.S. is the next virus—and it’s spreading fast

That’s the philosophical way of describing the erosion of common understandings about not just what the truth is, but about how we’re all supposed to go about the work of figuring out what the truth is in the first place. Facts used to matter. Now, not so much.

Rogan stands accused of engaging in dezinformatsiya, as the Russians elegantly describe the traffic in dangerous half-truths and lies deployed as offensive weaponry in propaganda warfare. Specifically, Rogan’s offside notions about vaccines and masks are widely understood to make him a dangerous menace to public health. While he’s helpfully referred to himself as a “moron” for suggesting young people shouldn’t bother themselves with COVID vaccinations, the former “Fear Factor” game show host’s Spotify broadcast, the Joe Rogan Experience, still draws roughly 11 million listeners per episode.

I should straight away confess my own loyalties this week were to the cause of Team Neil. One must take sides, after all. Sorry, but that’s how these proxy wars work. There’s little room for conscientious objection, and the alliances that form up can draw the most disparate and ordinarily unfriendly parties to one another in the same blocs, rallying behind banners that wouldn’t otherwise summon them.

In all the epistemic chaos abroad in the Anglosphere—it churns and roils its way through the culture only most noticeably in the undying allegiance of millions of Americans to the disgraced former president Donald Trump—we’ve reached the point where the pandemic’s early public consensus and trust in government experts, in Canada at least, appears to be collapsing.

Canadians almost invariably end up adopting the culture-war habits Americans torture themselves with, so there’s now a “small fringe minority of people who are on their way to Ottawa who are holding unacceptable views that they are expressing.” This is how Prime Minister Justin Trudeau inelegantly described the convoys of truckers and their camp followers rumbling along Canada’s highways in their Peterbilts and Kenworths, and Freightliners and Macks, intent upon converging in Ottawa this weekend.

The On-to-Ottawa organizers insist they are against vaccine mandates imposed upon anyone, not just cross-border truckers, but many protesters appear to share more seething anger and frustration than any clear and coherent objective. Parliament Hill police were planning on about 10,000 people showing up. It’s been a bit unsettling to consider how all this might end up playing out, because there are some genuinely nasty characters who have insinuated themselves into the anti-mandate protests. The Parliamentary Protective Service insists that everything would proceed according to routine this weekend, but it still seems unlikely that events will go on to resolve themselves quite as efficiently as they appeared to in the Young-Rogan conflict.

It wasn’t just a quarrel about Spotify’s royalty rates or shuffle features. The Spotify rumpus was at least partly about whether a musician like Young could use his enormous star power to force an audio-streaming company with roughly 380 million monthly users to ditch what could be described, in the most charitable terms, as the world’s most popular streaming public-affairs talk show. But it’s also about money. A lot of money.

RELATED: How anti-vaxxers could disrupt the cure for the COVID-19 pandemic

Rogan signed an exclusive contract with Spotify two years ago, reportedly worth more than $100 million, and Spotify is discovering that there’s more profit to be had in podcasts than in archiving digital versions of yesteryear’s hit singles. Young, who had six million monthly listeners on Spotify last week, sold his music catalogue to publisher Hipgnosis last year for $150 million. While Young says losing his him-or-me ultimatum would cost him 60 per cent of his streaming-service revenue, it’s not like his abdication from Spotify will cause him any pain.

Young’s net worth is estimated at $200 million. Now that Apple Music has declared itself Young’s new streaming home, Young’s earnings shouldn’t be disrupted all that dramatically. So as tidy as some of us might want it, this story is not so simple as a moral tale about a shaggy and lanky iconic veteran protest singer, in his 76th year, gallantly impoverishing himself by bravely sticking it to the man.

“No more taking of our freedom And our God-given rights, Pretending its for our safety When it’s really to enslave . . .” That’s a lyric line from a one of several anti-mandate songs recently released by Van Morrison, the usually mild-mannered Northern Irish musical icon whose lyrics are sometimes so ethereal as to be comparable to the poetry of the English mystic William Blake.

Early on in the pandemic, Noel Gallagher, the force behind the chart-topping band Oasis, vowed that he would not wear a mask when he was out at the shops. Only last weekend, the Marvel star Evangeline Lilly joined prominent vaccine skeptic Robert F. Kennedy at an anti-mandate rally in Washington D.C.

Last September’s celebrity COVID eruption was perhaps the most amusing. That’s when pop star Nicki Minaj drew unwanted attention to herself by claiming that a cousin’s friend in Trinidad had been abandoned at the altar by a bride who was displeased by the way a dose of the COVID-19 vaccine had made the groom’s testicles swell.

In this bizarre new world where celebrities are taken to be epidemiologists and the toxins of antisemitism are as prevalent on the “left” as they’ve conventionally been situated on the “right,” it’s not especially helpful to dismiss all those angry truckers as a pack of howling white supremacists. Something’s happening here, to borrow a Buffalo Springfield lyric from Young’s late 60s heyday, and what it is ain’t exactly clear.

Jonathan Rauch, the journalist, author, Atlantic magazine fixture and senior fellow in governance studies with the Brookings Institution, proposes a helpful way of comprehending the perplexing phenomena of the times. It goes like this.

Just as the formalized political rules that derive from the American constitution are necessary to make American democracy work, the ways that knowledge itself is constituted are necessary for politics in liberal democracies to work. And the system is close to broken.

In his just-published book, the Constitution of Knowledge: A Defence of Truth, Rauch describes how the space occupied by what he calls the “reality-based community” is shrinking. Its customs and conventions are falling away. The intellectual strata that has conventionally distilled truth from facts and data and goes about the work of constituting knowledge—historians, social scientists, journalists, policy-makers, jurists—is succumbing to cultures of enforced conformity that stagnate in their own hived-off echo chambers.

Ideological rigidity, speech codes, Twitter-induced outrage spasms and a strict emphasis on consistency with “narrative” are supplanting the social mechanisms that have long served to transform disagreement into knowledge. We are counselled to assess truth claims by sizing up the people “who are holding unacceptable views that they are expressing,” as Trudeau put it. The norms and institutions forged over decades by peer review, humility, fact-checking, good-faith debate and the evaluation of truth claims against objective evidence, verification and replication—it’s all up for grabs.