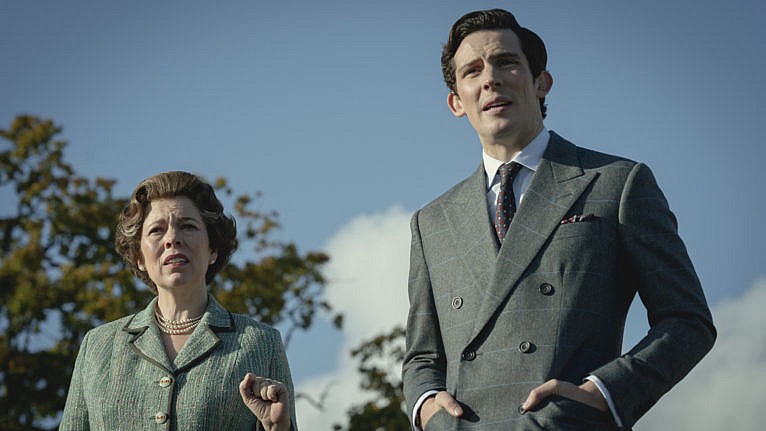 Olivia Colman stars as Queen Elizabeth II, with Josh O'Connor as Prince Charles in the fourth season of "The Crown." (Courtesy of Netflix)

What you should watch

The Liberator (November 10): Animation is usually associated in America with comedy or fantasy, not realistic drama. But this animated series, from writer Jeb Stuart (Die Hard), is a realistic World War II drama, based on a nonfiction book by Alex Kershaw, following a diverse infantry unit through the fight to liberate Europe, ending with the liberation of the Dachau concentration camp. Stuart originally wrote it as a live-action series, but instead it wound up being done by Trioscope, an updated form of rotoscoping that creates animation based on live-action reference, and made it possible to tell a story that would have been too expensive (on a Netflix budget anyway) to do with live-action or CGI. The actors who lent their voices and physical acting to the project include Bradley James as the commander of the unit.

The Life Ahead (November 13): Sophia Loren, one of the most famous living movie actors in the world, hasn’t made a movie since 2010, but came out of retirement for this film – probably because it’s directed by her son, Edoardo Ponti. It’s an adaptation of the book The Life Before Us by Romain Gary, about the relationship between Holocaust survivor Madame Roza (Loren) and Momo (Ibrahima Gueye), an Algerian orphan she takes into her home. The book has already been adapted into the film Madame Roza (with Simone Signoret), and a short-lived Broadway musical.

The Crown, season 4 (November 15): Finally, Netflix’s series about the British Royal Family reaches the most important moment in the history of the United Kingdom: the wedding of Charles and Diana. Oh, and also a war and a controversial new Prime Minister and things like that, but let’s face it: we all know what we’re here to see, and it’s not Gillian Anderson made up to look like Margaret Thatcher. In this season, which takes place between 1977 and 1990, the roles of Queen Elizabeth and Prince Philip are played by Olivia Coleman and Tobias Menzies, with Emma Corrin as Diana, Josh O’Connor as Prince Charles and Emerald Fennell as Camilla Parker Bowles.

Hillbilly Elegy (November 24): Conservative pundit J.D. Vance had a surprise hit in 2016 with his memoir about growing up in a dysfunctional Appalachian family and the values imparted to him by his maternal grandmother. The book was acclaimed as a portrayal of the white working class, but also accused of blaming poverty on poor people’s values. Netflix won the bidding war to adapt the book and assigned it to Ron Howard, one of the kings of U.S. middlebrow filmmaking; Vanessa Taylor’s screenplay has the adult Vance (played by Gabriel Basso) return to his old home and flash back to his past, with Glenn Close as his grandmother and Amy Adams as his mother.

Mismatched — NETFLIX ORIGINAL
Prajakta Koli and Rohit Saraf star as two aspiring tech professionals who meet and fall in love in their last summer camp experience before going to college. Based on the young-adult novel “When Dimple Met Rishi” by Sandhya Menon.

Trial 4 — NETFLIX DOCUMENTARY
The story of Sean K. Ellis, who was convicted of killing a policeman when he was 19 years old, and spent many years – and multiple trials – trying to demonstrate that the charges against him were false.

Felix Lobrecht: Hype — NETFLIX COMEDY SPECIAL
The German comedian (and former poetry slammer) makes fun of political correctness and talks about what it’s like to realize you’re in your thirties and not young anymore.

Mother — NETFLIX FILM
Thriller about a single mother (Masami Nagasawa) who discovers that her young son has done something terrible.

Love and Anarchy — NETFLIX ORIGINAL
Lisa Langseth created this eight-episode Swedish comedy/drama about Sofie (Ida Engvoll), a married consultant, and Max (Björn Mosten), an IT professional assigned to work with her – and possibly more than that.

Carmel: Who Killed Maria Marta? — NETFLIX DOCUMENTARY
Documentary about one of Argentina’s most famous crimes of the century: the death of María Marta García Belsunce, who was found dead in 2002 in what was originally announced as death from a head fracture… until that fracture turned out to have been caused by gunshots.

🎁 Operation Christmas Drop — NETFLIX FILM
A Congressional aide (Kat Graham) is assigned to investigate an Air Force base and possibly shut down its practice of dropping Christmas gifts on nearby islands. While there she clashes and probably falls in love with her guide (Alexander Ludwig).

Paranormal — NETFLIX ORIGINAL
Six-episode series from Egypt, about a scientist (Ahmed Amin) who finds himself investigating a series of highly un-scientific paranormal occurrences. Based on a popular series of novels by the late Ahmed Khaled Tawfik.

Citation — NETFLIX FILM
Based on a true story about a young woman who struggles to be believed after she reports a rape attempt by a professor at her college.

Country Ever After — NETFLIX ORIGINAL
Originally announced by Netflix under the title “Country-ish,” this reality show is about the family life of country music star Coffey Anderson and hip-hop dancer Criscilla Crosland, and the way their different parenting approaches reflect the differences between country and city living.

🎁 Dash & Lily — NETFLIX ORIGINAL
Based on the YA novel series “Dash & Lily’s Book of Dares,” this romantic-comedy series follows gloomy Dash (Austin Abrams) and happy Lily (Midori Francis), two teens who haven’t met yet but communicate through a notebook that they pass between each other, daring each other to live life to the fullest.

The Possession of Hannah Grace

Trash Truck — NETFLIX FAMILY
From Netflix’s animation department comes the heartwarming story of a boy and his best friend, an anthropomorphic garbage truck who has eyes and a mouth and can fly sometimes.

What We Wanted — NETFLIX FILM
Austrian indie drama, directed by Ulrike Kofler, about a couple (Lavinia Wilson and Elyas M’Barek) who find themselves unable to conceive a child.

The Life Ahead — NETFLIX FILM
See introduction for details

The Minions of Midas — NETFLIX ORIGINAL
A rich man gets a series of increasingly threatening letters from a mysterious organization known as the Minions of Midas. Based on Jack London’s story of the same name, but updated to present-day Madrid.

The Boss Baby: Back in Business: Season 4 — NETFLIX FAMILY
More episodes of the animated spinoff of the DreamWorks animated film franchise, about a boss who is a baby (or, if you prefer, a baby who is a boss).

We Are the Champions — NETFLIX ORIGINAL
Rainn Wilson (The Office) executive-produced this documentary series, where each episode focuses on a real-life competition and the people who enter it. The competitions include “Cheese Rolling, Chili Eating, Fantasy Hair Styling, Yo-Yo, Dog Dancing and Frog Jumping.”

🎁 Holiday Home Makeover with Mr. Christmas — NETFLIX ORIGINAL
Benjamin Bradley, who has been dubbed “Mr. Christmas” for his huge collection of Christmas memorabilia, stars in this series where he guides the viewers on how to decorate their homes for the season.

🎁 The Princess Switch: Switched Again — NETFLIX FILM
In 2018, Vanessa Hudgens starred in a “Princess and the Pauper” story about a Duchess who switches places with someone who looks exactly like her. In the sequel, they switch places again, but then it turns out there’s a third person who looks just like them.

🎁 Alien Xmas — NETFLIX FILM
A stop-motion animated film about aliens who try to take over the world but are foiled by the Christmas spirit. From the Chiodo Bros. (Killer Klowns from Outer Space), based on their book.

If Anything Happens I Love You — NETFLIX FILM
Animated short about a couple dealing with the aftermath of their child’s death.

Voices of Fire — NETFLIX ORIGINAL
In this series, Pharrell Williams returns to his home town of Hampton Roads, Virginia to show how the local church, led by his uncle Ezekiel, built a world-class gospel choir.

🎁 Dolly Parton’s Christmas on the Square — NETFLIX FILM
Another original Christmas musical, with new songs by producer and star Dolly Parton. It stars Christine Baranski as a female Scrooge who wants to evict everyone from her hometown until an angel (Parton) shows her the way. Directed by Debbie Allen.

🎁 Dragons: Rescue Riders: Huttsgalor Holiday — NETFLIX FAMILY
A special Christmas episode of the DreamWorks animated series, a spinoff from How to Train Your Dragon.

El Cuaderno de Tomy / Notes for My Son — NETFLIX FILM
Based on a true story about a woman who, upon learning that she has a terminal illness, creates a notebook for her young son to remember her by.

🎁 The Christmas Chronicles: Part Two — NETFLIX FILM
Sequel to the 2018 film about a brother-sister team (Darby Camp and Judah Lewis) who had to replace Santa Claus (Kurt Russell) on his annual duties. This time, they have to save Santa from a villain who wants to destroy the North Pole and, presumably, Christmas. Chris Columbus (Home Alone), who produced the first movie, writes and directs this one, which also stars Goldie Hawn and Mrs. Claus.

Mosul — NETFLIX FILM
Anthony and Joe Russo produced this film where renegade cops are the good guys: it’s based on a true story about a SWAT team that waged a fight against ISIS in their home town.

🎁 A Go! Go! Cory Carson Christmas — NETFLIX FAMILY
Yet another instalment of Netflix’s animated show about a talking car. In this special, he meets Santa Claus, who is reimagined as a talking snow plow.

The Call — NETFLIX FILM
A woman picks up an old phone in her old home, and finds that it connects her directly to someone else who used to live in the house.

🎁 Dance Dreams: Hot Chocolate Nutcracker — NETFLIX DOCUMENTARY
Legendary choreographer/director Debbie Allen, also present on Netflix this month as director of Dolly Parton’s Christmas on the Square, is profiled in this documentary as she stages her annual production of “Hot Chocolate Nutcracker” with a cast of young dancers.

Don’t Listen — NETFLIX FILM
Horror film about a man who thinks he hears the voice of his dead son.

🎁 Überweihnachten / Over Christmas — NETFLIX ORIGINAL
Three-part limited series, about a Christmas reunion between two brothers, one of whom is now dating the other one’s ex-girlfriend. Starring German comic Luke Mockridge.

Virgin River: Season 2 — NETFLIX ORIGINAL
Mel (Alexandra Breckenridge) moved from the big city to a small California town last season and found that small-town life was a lot more dramatic than she expected. This season, the drama continues, including murder.

La Belva / The Beast — NETFLIX FILM
A man tries to capture the kidnappers of his daughter, but he’s also a suspect in the crime.

The Nutcracker and the Four Realms

🎁 Wonderoos: Holiday Holiday! — NETFLIX FAMILY
The Wonderoos continue to teach children through talking and singing, this time with a holiday theme.

A Love So Beautiful — NETFLIX ORIGINAL
Korean remake of the Chinese teen drama series about two childhood friends who fall in love.

Finding Agnes — NETFLIX FILM
Sue Ramirez and Jelson Bay star in the story of a man reconnecting with the mother who abandoned him.