The capital of Manitoba (not T.O. or Montreal) has Canada’s second-hottest art scene 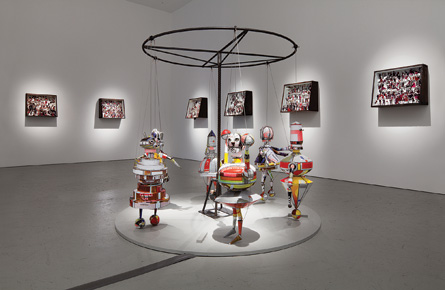 One of Canada’s more fascinating cultural features is the spectacular international success of the Vancouver art scene. But that’s old news. More surprising is Canada’s No. 2 spot. It belongs neither to Toronto nor Montreal, but to Winnipeg. These days, when foreign art lovers talk about Canadian art, they generally mean western Canadian art.

The success of the Winnipeg scene is hard to explain because it’s exceptional in so many ways. For example, as a rule, the biggest cities harbour the liveliest vanguard art communities: New York, London, Paris, Berlin…So what’s the deal with Winnipeg?

The capital of Manitoba is known for being rough around the edges and yet, art-wise, you couldn’t call it disadvantaged. For starters, the University of Manitoba runs a decent school of art (est.1913); then there’s the Winnipeg Art Gallery, a centenary art museum now new and improved; and Plug In, a one-time artist-run centre now pushing 40, just morphed into an Institute of Contemporary Art with fancy new digs. There’s also Border Crossings, a classy art magazine that keeps a sharp eye on the home front.

If you’re into the hard-core cutting edge, though, look away. Artists here don’t go in for newfangled media much, let alone brainiac “out there” art. They like handmade representations of people, places and things. Like the Inuit art for which the WAG is famous, the local non-Inuit artists are busy describing their world simply and plainly. At least on the surface.

Winnipeg swims against the current in another respect as well. The character unique to art scenes has been evaporating for decades, scorched by the cult of originality. These days, artists are largely on their own. Not so Winnipeg; its artists demonstrate that you don’t need to sacrifice your individuality for the sake of genius loci. Aside from figuration, this “personality of place” seems to be based on humour.

Marcel Dzama is the best known of the Winnipeg-bred art stars. When I saw his recent show in New York, it was packed with people concentrating hard. There were few smiles for so darkly funny an exhibition with its depressive pull-toys and Aztec-like scrolls of modern slaughter. Recently, Dzama upped the ante with dioramas in porcelain and some scratchy satirical dance films.

Another export, Jon Pylypchuk, manages to fashion beauty out of the inane. A typical painting is an abstract mess that looks like the day after the Big Bang. Lost in the swells of genesis will be one of his goggled-eyed munchkins with collaged words coming out of its face, fortune cookies that feel clipped from the pages of Nietzsche. They make me dizzy (in a good way).

Although Karel Funk doesn’t go in for weird humour, he certainly shares the local penchant for pictures of people. Like a 15th-century Flemish hyperrealist, he makes close-up portraits of his buddies that take months to paint. The New York Times called his work “spiritual,” by which they also meant his technique: he paints hair one at a time. In the newer work, the sitter disappears completely behind obsessively rendered parkas. In this day and age, it’s comforting to see art defending privacy.

Winnipeg’s new kid on the international block, Sarah Anne Johnson, marries snapshots with modelling clay figurines. In a recent work, she accompanied a group of conservationists to the Galapagos Islands to eradicate the non-native species. Interspersed among her photos of the expedition are shots of plasticine caricatures of the same group, only this time the artist mostly makes it up. Did someone really snuggle up to a sea lion after an underwater pas-de-deux?

There are plenty more artists who live near The Forks worth knowing about, and an exciting new generation is emerging.This summer, a major French contemporary art centre, La Maison Rouge in Paris, is mounting My Winnipeg, a show that takes a broader look at this hot town. Organizers borrowed the title from a mo vie by Guy Maddin, yet another local artist with an international fan base. Move over, Vancouver!