Not your grocery store's tofu

When David Wong, the chef at Vancouver’s gleaming Fairmont Pacific Rim’s Oru, was developing the pan-Asian bistro’s menu a year and a half ago, he thought of his grandmother’s tofu. Though he’d often seen her prepare it, he’d never taken note of the actual process: “I was more concerned with eating it.” Wong hadn’t foreseen his own obsession with making perfect tofu, which emerged prior to Oru’s opening just before last year’s Olympics. “We’re all knowledgeable cooks here,” explains the former top 10 Bocuse d’Or competitor, “and nothing’s impossible for us to achieve. But this one was just mind-boggling.”

While several hidden gems in Chinatowns from Toronto to Richmond, B.C., have been making silken tofu for years, the upscaling of bean curd is a relatively new phenomenon, with the house-made version available at just a handful of swish Asian restaurants. In Toronto, Sushi Kaji chef Mitsuhiro Kaji has offered up various takes during his famous omakase meals; one night could include soft tofu lavished with sea urchin and shimeji mushrooms, another could feature poached fiddleheads enveloped in a pale cloud of homespun tofu. At Oishii Boston in Boston, Tokyo-born chef-owner Ting Yen says they make their own tofu because it tastes better than the store-bought stuff. “To capture the savoury flavour of soy is the key point,” he says. “I always felt conventional tofu was watered down.”

Regular old watered-down tofu is what drove Dawne Gourley to try making her own for her blog Baker’s Balance. The former pastry chef at Bishop’s in Vancouver, Gourley is overseeing the opening of chef David Hawks­worth’s Bel Café in the Rosewood Hotel Georgia in Vancouver, which is slated for May. “I think more restaurants don’t make their own because it’s so cheap to buy tofu.” But, she says, “You can taste the fresh in homemade, and you can really control texture and quality.” She would love to see more respect paid to high-quality tofu, which would involve “not moulding it into meat-shaped substitutes and rivers of soy milk lattes.” 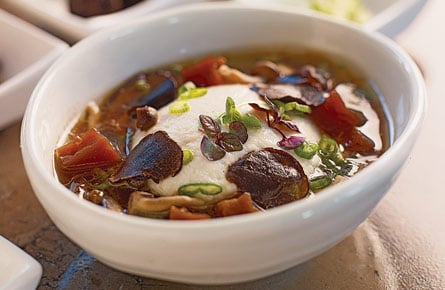 Back at Oru, chef Wong explains last year’s quest to create impeccable tofu this way: “We hit the perfect golf swing on our first swing—but then it was all downhill from there.” The soy milk coagulated, “but it was the most horrible texture.” Sometimes it was as dense as wood. Other times it would set as soft as porridge. There was no consistency of product, even though the ingredients were peerless: only the best soy beans, all from the same supplier, which were soaked for 24 hours, then drained and blitzed in a blender and strained through cheesecloth. “So you have this beautiful fresh soy milk, we bring it up to 193° F—we had tried 190, 185, 187, but we determined that 193 was perfect.”

At this point, he added a sea salt called nigari to the milk, and that’s where things fell apart. “We’d whisk it in, or we’d add the salt to the container and pour the milk on top of it. We tried sprinkling it in.” Nothing worked.

Then, by happy accident, someone poured a pot of hot soy milk from counter height into a container of nigari that was sitting on the floor. “Five minutes later we had the most perfect silken tofu, and 100 per cent coagulated.” The magic bullet turned out to be height. Further research confirmed the perfect distance: pour the soy milk two feet above the salt. “The funny thing,” Wong recalls, “was that we were supposed to be testing 50 different dishes for the restaurant but we were spending all of our time on tofu. It totally consumed us.”

Tofu has since become Oru’s signature dish. It’s steamed for two minutes and served warm with braised daikon, emerald green gai lan and a subtle yet umami-rich shiitake mushroom sauce that takes Wong back to his grandma’s kitchen  in Nanaimo, B.C.. His tofu has a fresh texture and flavour; you can’t exactly slice into it, but it’s not silken either.

“It has converted people to tofu, which is hard to do,” says the chef. He’s considered offering fried tofu among other variations, “but we have such reverence for it as it is that we just leave it.”