Canada has a rich history of black music that’s been largely written out of our canon. Kaytranada leads a new canon. 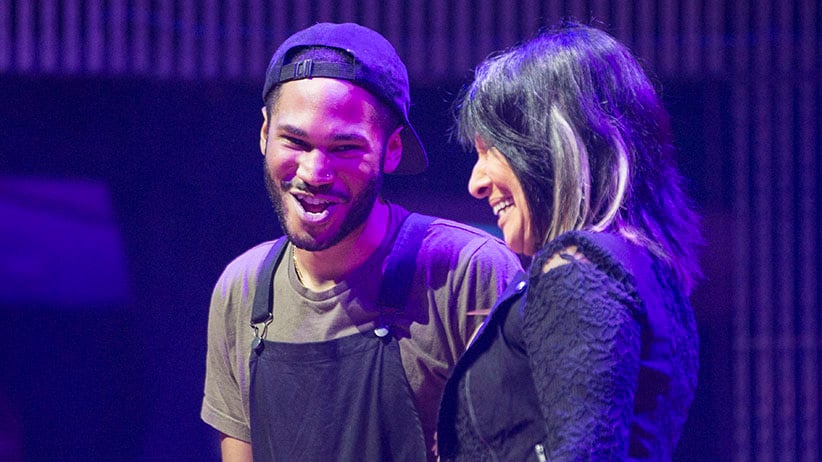 Kaytranada, left, is congratulated by Buffy St. Marie after being awarded the 2016 Polaris Music Prize in Toronto on Monday, September 19, 2016. (Chris Young/CP)

“This is so amazing. This is crazy, because this is hip-hop music, you know what I mean?”

That wasn’t Kaytranada last night accepting the 2016 Polaris Music Prize for his album 99.9%. That was Lauryn Hill in 1999, when her debut solo album won the Grammy for Album of the Year—a first for the genre, a breakthrough into the conservative old guard for a style of music that was 20 years old at that point. (To date, only one other hip-hop record has won the top Grammy category: Outkast’s Speakerboxxx/The Love Below, in 2004.) But Kaytranada’s quick, stunned speech was much like Hill’s, and for good reason: he’s the first hip-hop artist to win the Polaris in the prize’s 11 years of existence.

Drake, of course, has been shortlisted three times (not this year, however, for what was seen to be the underwhelming Views). Shad, K’naan, Cadence Weapon, and oddball Acadians Radio Radio have also shortlisted (so has Wu-Tang Clan’s Ghostface Killah, for a collaboration with BadBadNotGood). However, at a time when Toronto hip-hop in particular is blowing up worldwide, it was a scar on Polaris’s reputation that nothing from this corner of the artform had ever ascended to the top. Until now.

Politics aren’t supposed to factor into the Polaris decision, which is reached by 11 sequestered jurors during the gala itself. How the decision will play in the media should be far from their mind; the focus should be on the music and lyrics on the 10 shortlisted albums alone. I’ve been in that room (in 2013), and I can vouch for the idealism that manifests itself in the discussion. No one in that room is lobbying for one album or the other based on what artist or genre “is finally due.” The albums that win Polaris are usually the ones that win over jaded critics because they don’t sound like anything else on the shortlist, and they work as an entire album—not a series of singles.

Kaytranada didn’t win on politics; the 23-year-old Haitian-born Montrealer made a fantastic record that deserves all the acclaim heaped upon it worldwide ever since its release this past spring. (Read this excellent profile in The Fader for the full story.) It’s a joyous and celebratory dance party that draws in rising American R&B and hip-hop musicians like Anderson.Paak, Vic Mensa and AlunaGeorge, as well as Canadians BadBadNotGood and River Tiber. Even Diana Krall’s drummer shows up. 99.9% is a mash-up of old-school hip-hop, 21st-century beatmaking, Brazilian rhythms and Caribbean flavour, in a way that only a DJ from Montreal—the city where disco never died—can do. It’s the rare, primarily instrumental hip-hop record that holds together as an album. No one gave Kaytranada the Polaris as a patronizing feel-good measure; they gave it to him because he made a feel-good record that also represents the height of his artform.

I’m always hesitant to ascribe meaning to a Polaris winner. Usually the shortlist—assembled from votes by and suggestions from the approximately 200 jury members—is full of great records (and always missing even more). But the winner is chosen by those select 11 sequestered jurors, and the makeup of that smaller jury has everything to do with how the final vote shakes down. It’s therefore much more random than, say, the album that got the most votes from the larger jury. So when a francophone group wins (Karkwa) or a hardcore punk band (F–ked Up) or an Indigenous throat singer (Tagaq) or an anti-capitalist art-rock collective (Godspeed You Black Emperor) or a 74-year-old icon (Buffy Sainte-Marie), it makes for great conversation after the award, and a nice boost to the artist’s bank account. But that might be because one well-spoken juror in the room was boosting the underdog, or taking down a sacred cow and allowing something else to bubble up from the bottom.

This year, however, feels different. This year feels like a new Canada that’s long overdue.

The Weeknd won the Juno for Album of the Year this year, making him the first non-white Canadian to do so, and the first R&B artist. That album was a huge pop hit, so it wasn’t altogether that surprising, even if it was ground-breaking. Kaytranada is still very much an underground artist. While there are certainly tracks on 99.9% that can and should be on pop radio, it’s very much a hip-hop record in the tradition of RZA and J Dilla and DJ Shadow and J Rocc. That it can take one of Canada’s top arts prizes—and in the same year The Weeknd took home the biggest Juno—is a huge step forward, shattering a glass ceiling that’s existed since the days of Jay Douglas, of Salome Bey, of Eric Mercury, of Boule Noire, of Michie Mee, of Lillian Allen, of Rascalz, of Deborah Cox, of JackSoul, of Kardinal Offishall… you get the idea. Canada has a rich history of black music that’s been largely written out of our canon—much like our Indigenous heritage, only now stepping to the musical forefront with Polaris wins by Tagaq and Buffy (and a very likely future one for A Tribe Called Red).

Speaking of canons, this marks the second year Polaris has run the Slaight Family Polaris Heritage Prize, honouring albums that preceded the main prize’s inception in 2005. Full disclosure: I was tapped to assemble the juries that assemble the four shortlists (one each for the following time periods: 1960-75, 1976-85, 1986-95, 1996-2005). Anything and everything was on the table for discussion, from multi-million-selling Juno winners (Alanis Morissette’s Jagged Little Pill) to albums that the Canadian music industry ordered to be physically destroyed (John Oswald’s Plunderphonics). Oh, and look: there’s Oscar Peterson, Jackie Shane, Leroy Sibbles, Jackie Mittoo, Dream Warriors, Maestro Fresh Wes, Main Source, K-os, the Dears.

Two winners are chosen each year: one by critics, one by the public. You can vote here.