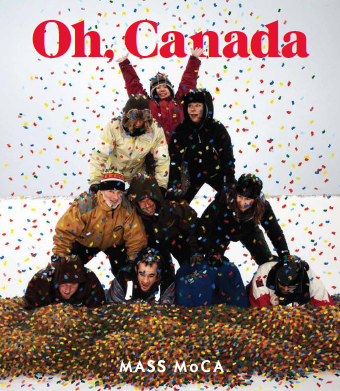 See: Contemporary Canadian artists get some southern exposure, as featured in Maclean’s.

Nothing about the Massachusetts Museum of Contemporary Art, which on May 26 is launching what’s probably the largest exhibition of Canadian contemporary art ever, called Oh, Canada, spells museum stodgy. “It’s the most non-museum museum you’ll ever come to,” says curator Denise Markonish, who criss-crossed the country on a studio-visiting odyssey over three-and-a-half years to choose the 62 artists and collectives in the show. “We have grounds outside and we do art in unusual places. There’s always a lot happening here, and in the area,” says the 36-year-old American. “It’s really a pretty vibrant place.”

And nothing about the Oh, Canada exhibition catalogue sounds like it’ll be run-of-the-mill either. You certainly won’t find any “artspeak”–a term used to describe the sometimes needlessly complicated and impenetrable art-related prose of curators and academics, which Markonish describes as “awful”. Her goal with the book, as it’s been for her previous four publications, is to create “something that is a lasting document and that anybody from my mother to my colleague could read.”

The exhibition catalogue won’t be printed in time for the opening on May 26, since there was so much new work in the show that’ll need to be photographed for the publication, and “you don’t work this long on something and not do it right,” says Markonish. But it will be available on Amazon, in bookstores and on the MASS MoCA website by mid July for $49.95 USD.

Here are excerpts from an interview with Markonish on what to expect from the book. And don’t forget to check out the photo gallery, courtesy of photographer Roger Lemoyne, for a behind-the-scenes peek of the artists installing their work, the works themselves and MASS MoCA’s gorgeous grounds in North Adams, Ma.:

It’s a 400-page hard cover book that is being co-published by us and MIT press and it’s really a unique take on an exhibition catalogue. While the show won’t be organized geographically, the book is. I really wanted it to feel like a travel guide. It’s broken down into regions, sort of like the Sobey Art Award does: so you’ll have west coast and the Yukon; Prairies and the north; Ontario; Quebec; and the Atlantic. And then an expat section.

For the beginning of each section, I’ve invited a creative writer to write an essay, memoir or piece of fiction. They are all Canadian. Well, the expat has dual-citizenship and that’s David Rakoff,who contributes to This American Life. He’s originally from Toronto but has lived in New York for 20 years. Lisa Moore has written for the Maritimes; Warren Cariou for the prairies; Doug Coupland wrote an essay for the west coast and Yukon—he’s sort of double dipping there [he’s also one of the artists featured in the exhibition]; we have an excerpt from the Underpainter by Jane Urquhart; and Jacob Wren, who is a young up-and-coming writer, for Quebec.

I had a curator write an introduction for the art in each province: people–all Canadian–like David Liss [Toronto’s MOCCA], Wayne Baerwalt [Calgary’s Alberta College of Art and Design] and Jen Budney [B.C.’s Kamloops Art Gallery]. And rather than artist statements, I asked all the artists to interview another artist in the show and they in turn were interviewed by an artist. They’re really terrific.

I also had an art historian, Robin Simpson in Vancouver, do an art historical timeline of Canadian art. I found that when I was doing the research that I had no idea about it. I didn’t learn about the Group of Seven in college. I had never heard of them. Maybe I had seen a picture of the Jack Pine but I had no concept of this sort of nation-building art group.

I also wrote a rather lengthy essay which talks about the artists in the show but goes beyond that to talk about the “whys” of this whole project. It looks at how the Canadian art system works as this distinct thing that’s very different than how it works in the US.