... but first the beloved comedian fields our questions 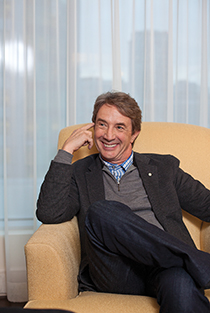 Martin Short, 62, is popping up everywhere these days, from hosting Saturday Night Live’s Christmas show to pitching Lay’s potato chips in a Super Bowl ad. A profile in Vanity Fair canonized the veteran of SCTV and SNL as “Hollywood’s most beloved comedian.” And the Hamilton, Ont.-born entertainer, who lives in Los Angeles, will host the inaugural Canadian Screen Awards in Toronto. Replacing TV’s Gemini Awards and film’s Genies with a single show, the CSA gala will air live on CBC TV on March 3 at 8 p.m.

Q: Nice to see you christening the CSAs. But after your show-stopping song-and-dance number on SNL, you should be hosting the Oscars. Why not?

A: First, I was never asked. Second, that would be a phone call where you’d say, “Oh God, I guess I have to do it, don’t I?” It’s a tough gig. People are very critical of the person doing that job. And at the end of the day, it’s not about them. You work four months on your monologue and all they write about the next day is “How about that Adrien Brody kiss!”

Q: What’s your strategy for the Canadian Screen Awards?

A: A strong opening. Make everyone feel relaxed, like it’s going to be loose and fun. Create touchstones—a hard laugh here, a soft laugh there. It’s like putting a mosaic together. But the evening is about honouring the work.

Q: We’ve always complained about the lack of a Canadian star system. What’s the fix?

A: I don’t know. It’s a unique situation. Growing up in Hamilton, I watched American television, and became aware of American stars. So it’s just about how do you get people to pay attention to good work. The CSA’s job is to highlight and showcase and entice, the same way a trailer or a teaser in a movie theatre would make you say, “Gee, I’ve never heard of that movie but I want to see it.”

A: I don’t think there’s any agenda [laughs]. Often I’m away doing concerts, and it’s thrilling for me if Steven can phone me up and say, “Are you here on the third?”

Q: Are you and Spielberg good friends?

A: We’re very good friends. We met in 1985. Our kids grew up and vacationed together.

Q: And you’re not bitter he didn’t cast you in Schindler’s List or Lincoln?

A: I’m over that. It’s his problem. It just kept him out of the big money.

Q: So are you hankering to have your own TV show again, or a big role in a movie?

A: If it was a great film and a great director and a great part, of course. My coming months are filled with television shows and stage shows, and Edward Albee and I are doing a workshop on a new play. That eclectic nature keeps me interested. Something I would not do is a long-running character where you go to Fox every day and shoot. What I find is more interesting are riskier things where you might bomb—that’s always intriguing.

A: Oh there are so many. I once opened up for Carole Pope and Rough Trade. It was December of ’78. Carole’s an old friend. I put together a hard-hitting comedy act, and I was booed and heckled throughout. I was doing a reform rabbi and a guy came up and threw a beer in my face. I said, “Hey, this isn’t light beer. Goodnight!” Carole was backstage crying. But this infamous word “bomb” is very abstract, because you don’t know what it means any more. You can have a film that doesn’t open, then 10 years later it is revered as a film that every university student must get high to. Was that a bomb or not a bomb?

Q: Are you thinking of one in particular?

A: ¡Three Amigos! wasn’t really a bomb. It was a disappointment.

Q: In the Vanity Fair profile, Larry David says, “Marty’s not driven to be funny; it’s not competitive or needy or desperate.” Which is odd because you play a lot of needy, desperate characters. But what does drive you to be funny?

A: I don’t work in anxiety. I don’t work in stress. If someone’s a prick, I have that person removed or I leave. The end result is a little less important than the joy of doing it. The one thing you can control is the hang—who are you going to work with and is it going to be fun?

Q: You don’t have a burning need to do it?

A: I don’t need to be doing any of this. There’s no big mortgage. My esteem is just fine. I haven’t really changed physically. Even though I’m 62, I’m not aware of [his voice drops to a baritone]: “Oh, God I can’t get my breath control,” or “Oh, my leg’s sore, how am I going to jump on that piano?” I feel the same way I did always, and I enjoy taking risks. If it doesn’t work out, I don’t go to my mirror at two in the morning and say, “I’m not worthy.”

A: I know so many. I don’t know where you go from Catherine O’Hara to Andrea Martin to John Candy to Eugene Levy to Dave Thomas to Steve Martin to Bill Hader to Fred Armisen to Bill Murray. And Bill Maher—Bill is remarkable because if you have dinner with Bill, it’s just a continuation. It’s not a persona. He’s not altering any thoughts for showbiz.

Q: Does Canada have a different sense of humour than the U.S.?

A: I don’t know. I used to feel when I was in Second City that the difference between Second City in Chicago and in Toronto was that in Chicago the scenes were very well-written, very politically oriented, sharp. The Canadians were a little goofier, more character-driven and, for me, funnier. You’d have Catherine O’Hara and Robin Duke playing two female truckers trying to stay awake. It wasn’t joke, joke, joke or political observation, but great character work. We were a little more influenced by the [Monty] Pythons.

Q: How did SCTV and SNL differ?

A: The advantage of SNL is there’s just this energy. You’re shot out of a cannon. The audience has been waiting a year to get those seats. SCTV, we’d shoot it in the studio with no audience. You could do ideas that were more bizarre and abstract without being told by the audience, “I don’t get it.”

Q: None of your characters has been spun into a movie. Not even Ed Grimley.

A: I always respected the sketch form. The same way a commercial can be an art form, and better than a 90-minute movie, a sketch at its own length can be classic and timeless. When I saw Pee Wee’s Big Adventure and Tim Burton’s work on that, I thought, “Now, if that guy had come to me and said, “I have this idea for an Ed Grimley movie”—making the character and the world he lives in equally bizarre—then maybe. But I personally never cracked it.

Q: Speaking of commercials, did you have any qualms about signing on to promote potato chips? There was a time when stars of a certain stature wouldn’t touch a commercial.

A: That changed long ago. There was a time when, if you were in the movies, you didn’t show up on television. It is now all one medium. I don’t think there’s a conflict any more.

Q: You did play a serious TV role in Damages. Do you yearn for more dramatic roles?

A: No. In fact, I was very hesitant about Damages because of that. I think that we and the audience make a deal with the funny people we’ve known for a long time. Our deal is they make us laugh. I can sing. I’ve done Broadway shows. I can come on Dave Letterman’s show and just sing a medley of songs. I can go as sincere as I want. But you’d always be waiting for the sandbag to fall on my head.

Q: What was it like hosting SNL the day after the Sandy Hook massacre?

A: Very, very bizarre. There were moments when you’d think, “Let’s pull the show.” That morning I was shooting two pieces. I was picked up at 7 a.m., then I saw the news. By the time I went home at 3 a.m. Saturday, to be back at noon, we didn’t know what to do. There were downsides to every choice. Lorne [Michaels] handled it brilliantly. At 11 a.m. he phoned me and said we should open with the children singing [Silent Night]. Normally the opening is there to get the audience laughing. We would have them crying. But it was such a tasteful, elegant solution.

Q: Are you comfortable living in America?

A: The United States is a spectacular country. If I wasn’t thrilled and honoured to live here, I wouldn’t. I spend three months a year in Canada, north of Toronto in the Lake Rosseau area. The trick of a country like the United States is if like you took Europe and united it, you would have certain states that are sophisticated like France and others, like Romania, that aren’t. You have a lot of guys who are spokespeople for money-making machinery. Like gun manufacturers. [NRA executive vice-president] Wayne LaPierre isn’t an intellect, he’s like a wrestler. So is Ann Coulter.

Q: On a personal note, it’s been 2½ years since you lost your wife to cancer. How are you doing?

A: Well, I don’t think you ever do great. You just continue. You have [three grown] kids and you have traditions and you have homes to keep up. Your job isn’t done. Then you’re doing things for your wife and your wife is always with you and with the kids. No one escapes this.