One Canadian swimmer's journey to the Tokyo Olympics through the film Nadia, Butterfly

Olympic swimmer Katerine Savard hoped to walk the red carpet at the premiere of her film in Cannes, then make her final bid for gold at the summer games in Tokyo. COVID-19 had other plans. 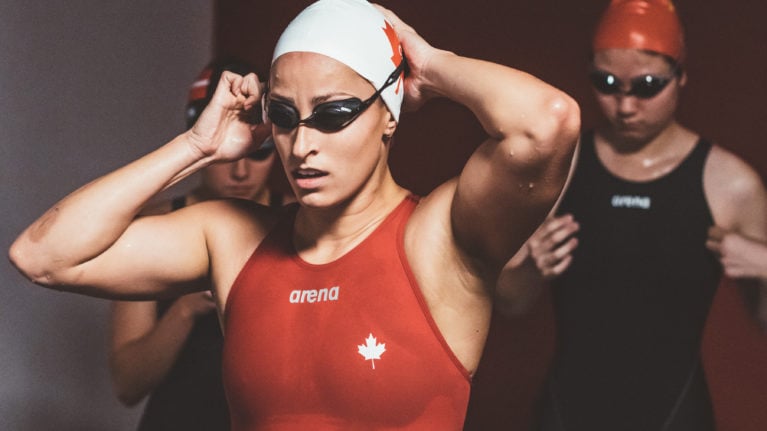 The butterfly is a stroke unlike the others. With its undulating dolphin kick, the lunging arms, and a ferocious level of exertion, the swimmer looks like a fish fighting to get airborne. The “fly” is Katerine Savard’s speciality. Since breaking her first a Canadian record for the stroke at 16, Savard powered her way through a career that would set more records and reap a dozen medals over the next decade, including a bronze in the freestyle relay at the 2016 Rio Olympics. But every high-level athlete knows that winning is not enough. You need an exit strategy.

Savard had a plan. She would retire from competition this summer, at the age of 27, after swimming her final race at the Tokyo Olympics. Meanwhile, with no prior acting experience, Savard had taken a dive into the deep end of Quebec cinema, landing the title role in Nadia, Butterfly, a movie about a fictional Canadian swimmer who decides to retire at the age of 23 with one final race—at the Tokyo Olympics. Had the fairy tale unfolded as it should, in May, Savard would have walked the red carpet at the premiere of her film in Cannes, the Olympics of world cinema, then made her final bid for gold at the summer games in Tokyo.

COVID-19 had other ideas. The Cannes International Film Festival was cancelled, and Japan postponed its Olympic Games until next summer. But in May, Cannes honoured Nadia, Butterfly as the only Canadian film among 56 titles selected for the phantom edition of its cancelled festival. There would be no premieres, no prizes, no audiences, no festival. But Cannes anointed the films with its iconic palm-leaf logo, to give them a boost and open doors to future film festivals, such as TIFF and Venice, if and when they occur.

MORE: We’re all the Sopranos now

Which leaves Nadia, Butterfly floating in a surreal limbo—a movie set at a ghost Olympics is celebrated by a ghost film festival. Its producers considered digitally changing the Tokyo 2020 signage in pool to read Tokyo 2021, but decided against it. “That’s a good thing I guess,” says writer-director, Pascal Plante, on the phone from Montreal. “Now they’re saying the Games might not happen at all if there’s not a democratized vaccine available. And it would be so weird to have a film that takes place at a Tokyo Olympics that never happens. We already created an alternate universe, but that would be an even weirder one—sci-fi-ish.”

Plante drew on his own experience as a former high-level swimmer to create Nadia, Butterfly. Shot in Montreal and Tokyo, the movie takes us behind the scenes of Olympic competition, immersing us in the swimmers’ world with exquisite visuals and an eye for authentic detail. Swimmers bodies have an ideal balance of muscularity and grace, and Plante’s camera focuses on their choreographed rituals, in and out of the water, with luxuriously long, uncut takes. Tracking shots of races, filmed by a cameraman on surfboard pulled by wires, have a breathtaking intimacy. But the heart of the film is devoted to a drama that unfolds after the competition, when the motto “higher, faster, stronger” acquires a new meaning in a night of intense partying.

With this assured second feature, the 31-year-old Plante is poised to be the next rising star among Quebec auteurs, on the heels of Denis Villeneuve, Jean-Marc Vallée and Xavier Dolan. After his award-winning debut with Fake Tattoos (2017), a low-budget romance between two teens who meet at a punk rock show, Nadia, Butterfly is a far more ambitious venture, one that finally unites the director’s dual obsessions with swimming and cinema.

Like Savard, he grew up in Quebec City and spent his teens in the pool. He won a national medal at 19, when he quit the sport to study film. “I was at that crossroads,” he says. “I was talented enough to dream of being on the international team in 2010. Though it’s a big commitment. You’re gambling your 20s basically. My retirement was easy in a way because I transferred from one passion to another, from the intensity of swimming to the intensity of cinema. What helped is that Concordia University did not have a swim team.”

But bringing a swim team to the screen became Plante’s passion project. “Swimming is criminally under-represented in film,” he says. “It’s nearly always used as metaphor. But it’s very cinematographic. The metronome of your arms, the stroke, the sound, you’re in another element.” Innovating techniques for Nadia, Butterfly, Plante captured a swimmer’s P.O.V., even blurring the corner of the frame where her goggles get steamed up. “I think it all comes from me spending an indecent amount of time in the water. This has been in the back my head for a long time.”

Plante was determined to undercut the cliché of athletic heroism. “Sports movies tend to have a simplistic narrative arc,” he explains. “It’s about whether he or she is going win in the end. Swimming is more psychological.” Reversing formula, he put the racing scenes at the head of his film. Much the story then unfolds as an aftermath, as Nadia and her teammates dive into an epic night of tequila shots, powdered drugs and casual sex, followed by the inevitable crash. Olympic athletes are seen as role models, says Plante, but that’s not always the case. “There’s a big work-hard, play-hard mentality in swimming. The season for me would be six days of working super hard, and every Saturday night we’d get crazy drunk. We were intense people.” 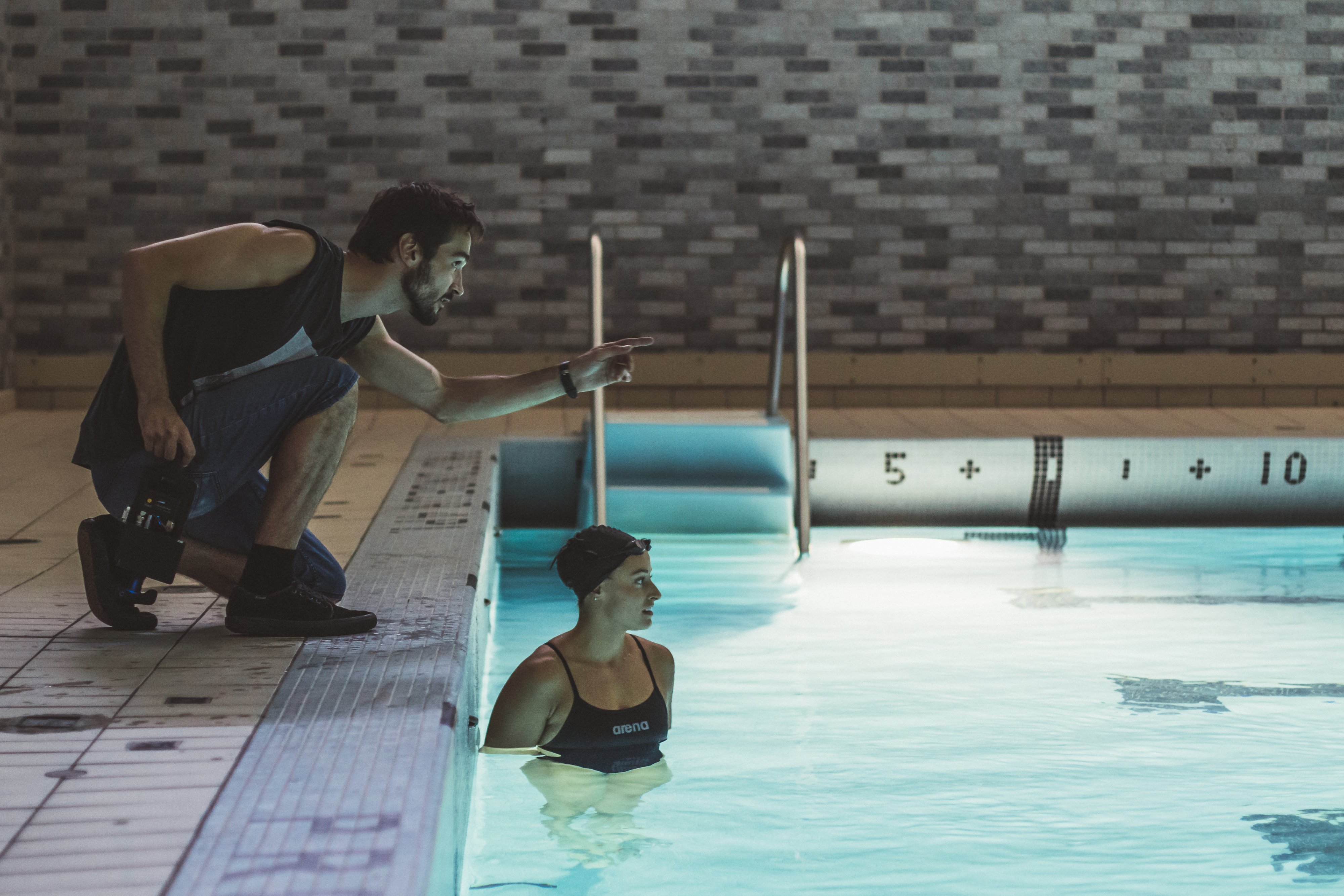 Behind the scenes of ‘Nadia, Butterfly’ where director Pascal Plante works with star Katerina Savard.

Savard agrees that some Olympic swimmers may go to extremes. But not her. “I never took any drugs,” she says, interviewed from her home in Montreal. “I’m able to party with people and not do the same things as them.” At one point, her character in the film declares that she’s had “an abusive relationship with swimming.” Savard admits that was probably true of herself when she was younger—“maybe not that abusive, but we’re so focused on swimming and performance, it’s not healthy.” Since then, however, she’s she says she’s achieved an equilibrium that her character clearly lacks—“Nadia is more easily influenced.”

Performing the film’s aquatic scenes came naturally to Savard as well as the three women playing her teammates, who are all competitive swimmers. But the dramatic scenes posed an unfamiliar challenge. Savard first met with Plante as a script consultant. And their informal interviews began to serve as auditions before she was even aware of it. “I would pick her up after training. We’d go to some place not fancy near the pool to talk,” he says. “And I saw something. I realized she’s so used to living in the public eye, she can project for the camera. I knew right away she could be natural. The question was: can she be touching? Can we get close to her emotions?”

As it turned out, that too came naturally for Savard. “I’m pretty close to my emotions, so I can cry really easily and laugh easily,” she says. And it helped that co-star Ariane Mainville, who shared her most dramatic scenes, was a good friend. Her most difficult challenge was a party sequence that left her waking up naked on the floor beside a man she’d just met. “That was hard,” she says. “I haven’t seen the movie yet, so I don’t know what it looks like.” Then, a nervous laugh. “Hopefully it will be okay!”

In fact, none of the cast have seen the film, “which is nuts,” says Plante, who couldn’t bring himself to send them a video link. “It’s going to be so much more rewarding for them to see themselves on the big screen. We worked so hard on the film. The theatre is its natural habitat.” In July, he adds, they plan to rent a 400-seat cinema and invite 100 cast, crew and friends to a socially distanced private screening.

Plante is sanguine about missing the excitement of Cannes premiere. He’s young. With luck, another film will take him to a red carpet on the Riviera. His only disappointment is that his cast “won’t be able to experience that craziness.” Meanwhile, he hopes to see Nadia, Butterfly open in theatres this fall. His biggest disappointment, he adds, was the postponement of the Olympics. “My thoughts went immediately to the swimmers,” he adds. “The festival/cinema world will be back in some way next year. But training for a once-in-four-years, life-changing event is something else. Katerine had a shot at Tokyo. Waiting another year, doing those early morning workouts every f**king day, is a big deal.”

As for Savard, she’s now hoping for one last chance to swim for gold in Tokyo at the age of 28, rather than 27. Her exit strategy is to become a teacher, and she claims to have no ambitions to be a movie star. But you never know. Savard has proven that she can not only fly across the water like a superhero but hold a lingering close up while her emotions quietly swim to the surface. And as we wait for her to emerge on the big screen, the slow-opening chrysalis of Nadia, Butterfly may reveal a silver lining.