Sex, aging and the very strange career of Julianne Moore 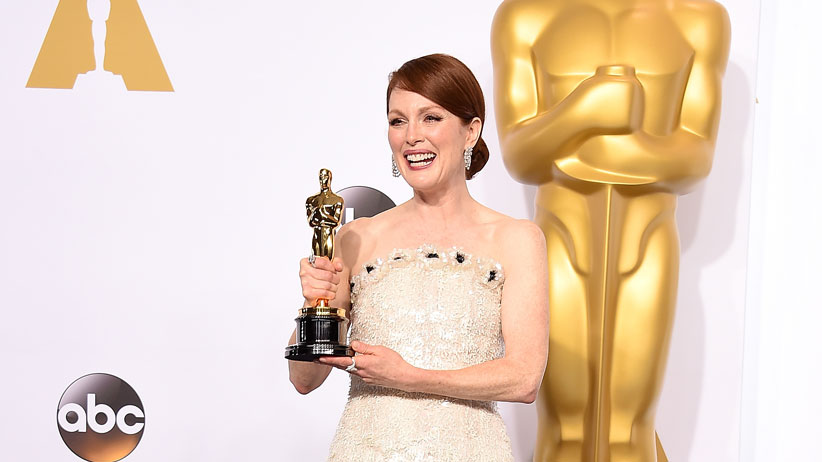 In a year in which so many Oscar decisions can be rightly questioned—from the lack of diversity in the acting categories, to the snub of The Lego Movie, to the puns of Neil Patrick Harris, there’s one thing the Academy got right: Julianne Moore took home the best actress award, her first-ever Oscar.

Read that list of roles again and try to imagine Meryl Streep taking any of them.

Streep, widely regarded as the greatest living actress, still reigns supreme in Hollywood. Oscar presenter Jared Leto joked at Sunday’s ceremony that she had been nominated for best supporting actress “in accordance with California State Law.”

But it’s Moore who’s mapping out a new way for women to age in Hollywood. While Streep’s latest films have alternated between lacklustre musicals like Into the Woods and the biographies of beloved icons like Julia Child, Moore continues to pick out parts with a razor-sharp edge,  into her mid-50s. The biography she’s bringing to the big screen this year is Freeheld, the real-life story of a terminally ill detective who fights to secure benefits for her lesbian partner. It will be the fifth time Moore, who is straight, takes on a queer role.

“I would simply call her the best actress of her generation,” actress Ellen Barkin said at a career tribute for Moore in January. “She is the most determined and maybe the most courageous actor I know.”

In a 2010 interview, a Guardian reporter asked Moore if there is anything she’s ever balked at doing on-screen. “Nothing within the realm of human behaviour,” she replied. (Watch her as a mother incestuously obsessed with her son in Savage Grace and you’ll have to agree: nothing is off-limits.)

This is a decidedly unusual attitude in Hollywood.

Even in an era of unprecedented openness about sex and sexuality, many actors put limits on how far they’ll go for their craft. Just last month, Kevin Hart said he wouldn’t play a gay character. In her breakout role as a sex worker in Pretty Woman, Julia Roberts used a body double. Scarlett Johansson simply has a no-nudity clause in her contract.

It’s not hard to understand why actresses in particular would err on the side of caution when it comes to sexuality. Image is everything in Hollywood, and it’s a town that—in stark contrast to European cinema—seriously stresses about nudity. Just 50 years ago, its producers still officially adhered to the Hays Code, a self-imposed form of censorship from the 1930 that stated that no picture should “lower the moral standards of those who see it.” This included an all-out ban on nudity and discussions of sexual “perversity.”

The flip side of this prudishness is an obsession. It’s been almost 25 years since Sharon Stone uncrossed her legs in Basic Instinct, and yet it still got a nod on Sunday night, when host Neil Patrick Harris sang about how Stone “unsettled” us all by “going commando.”

A few things help to explain how Moore has managed to sidestep the traditional tizzy over an actress doing nudity. For one thing, she benefited from a relatively late start in Hollywood. Unlike Elizabeth Berkley, who famously tried to morph from wholesome Saved By the Bell teen to grown women with Showgirls, Moore wasn’t well known until she was 30. Similarly, there was never any build-up to seeing Moore without her clothes on. Unlike Halle Berry’s topless reveal in Swordfish, it was just something Moore had done from the start.

Moore’s two decades of boundary-pushing may ultimately help to normalize nudity in Hollywood, but that’s still a few steps away—note that the Academy ultimately awarded her for her sensitive portrayal of a university professor diagnosed with early-onset Alzheimer’s disease, and not for one of her more eyebrow-raising characters.

In her acceptance speech on Sunday, Moore wryly thanked the Academy because she’d read winning an Oscar could lead to living five years longer—and, she quipped, “my husband is younger than me.”

For many actresses, age is no laughing matter. Amy Poehler skewered the ageism that overshadows the industry at this year’s Golden Globes, joking of Patricia Arquette’s nomination for Boyhood: “There are still great roles for women over 40, as long as you get hired when you’re under 40.”

But Moore is proceeding as though she’s never heard of this expiry date, delightfully disregarding what others might say is appropriate for a woman who turns 55 this year. One skeptical reporter asked her if she’ll continue to play the overtly sexual roles she favours as time goes on. “I try not to see the boundaries in anything,” Moore retorted.

Don’t look for her in a musical anytime soon.