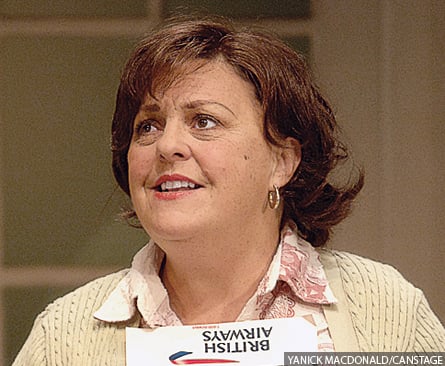 Last year, Roy Surette, the artistic director of Montreal’s Centaur Theatre Company, called Nicola Cavendish to see if she’d star in a co-production he wanted to mount with Toronto’s Canadian Stage Company. “He said, ‘I’m going to ask a favour of you, Nicky,’ ” the Vancouver-based actor recalls. She knew what was coming. “I said, ‘Roy, don’t you dare. Don’t you dare ask me if I’ll be Shirley Valentine again. You know how much I love her. You know how I much I value her words. But I don’t want to. It’s too much work. I’m too old.’ ”

Cavendish told the story last week in Toronto, the morning after her bravura 2½-hour, one-woman show as the hilarious, miserably married Liverpudlian housewife who shucks her husband and discovers her clitoris on holiday in Greece. Befitting the respect Cavendish commands on the Canadian theatre scene, the actor Kenneth Welsh led the standing ovation.

Cavendish couldn’t say no to Surette, who’d directed her in the 1990 Canadian premiere of the 1986 British comedy at the Vancouver Playhouse Theatre, and again when she took the smash hit on a national tour. Critics sneer at its Hallmark-card philosophy, but the tale of brave mid-life renewal is theatrical Viagra, box-office ka-ching. When Martin Bragg, who’d overseen the Vancouver production, joined the indebted Canadian Stage as artistic director in 1992, he brought Cavendish back in 1992 and 1993 to reprise the role.

Cavendish is known for brilliant performances—on stage in Caryl Churchill’s Top Girls, on film in Anne Wheeler’s The Sleep Room, on television in small parts in The X-Files and The L Word. Yet none has resonated quite like plucky Shirley Valentine. Women have told her they’ve been inspired to leave unhappy marriages. Two who took off to Madagascar on a whim sent her a postcard: “We’re doing a Shirley Valentine,” they wrote.

When Cavendish first played the 46-year-old character she was 38. She’s now 56. The production has been gently updated: Cherie Blair’s hairdo now inspires Shirley’s wig and she refers to “vegans.” More profoundly, Cavendish’s own life experiences—her mother’s death, a diabetes diagnosis and a happy decades-long marriage—have deepened the portrayal, says Surette: “She always nailed the comedy. Now she’s able to tap into the depths of a character who’s scared and reluctant and trapped.”

The performance is gruelling, says Cavendish, who’s clearly exhausted and also fighting the flu. “People say, ‘You make it look easy.’ But it’s not easy.” Still, she’s a spark plug, channelling Shirley’s best lines with affection and telling stories with theatrical flourish in a voice that reveals the British accent she emigrated to Canada with at age five. The first seconds alone on stage are scary, she admits, as the “adrenalin prompted by fear” kicks in and she psychs herself for the hours ahead. Winning the audience over quickly is key. She pays special attention to the balcony: “These are people who can’t pay for better seats so I care about them most.”

Cavendish gauges audience response like a mechanic tuning a car. She refers to the moment Shirley admits her husband doesn’t love her. “The gears go up,” she says. “I can hear them: they don’t want to go where I’m going but they’re willing to go with me.”

Bragg views Cavendish as an “internationally undiscovered star” and “one of the most remarkable actors on the planet.” Happily, given her commitment to the Canadian stage, fame doesn’t propel her. When the acclaimed actor and director Brian Bedford tried to recruit her to play the maid in his 1987 Broadway revival of Blithe Spirit, alongside Richard Chamberlain, Geraldine Page and Blythe Danner, she was initially reluctant; it took friends telling her she was nuts before she agreed. The New York Times theatre critic Frank Rich took notice, calling Cavendish “a cherub with a Louise Brooks hairdo” who managed to match Page for laughs.

After the Toronto run of Shirley Valentine ends on April 18, Cavendish will co-star with Fiona Reid in Joanna Glass’s Mrs. Dexter and her Daily. Surette has suggested a 20th-anniversary Shirley Valentine tour; Cavendish said no, at first, he says: “But I’ve been getting emails from her saying, ‘Such-and-such theatre is interested.’ ” Cavendish says she wants to leave it behind, then adds: “But I’ve always felt it should go to Newfoundland. Shirley’s never been to Newfoundland.” Roles have reversed, it appears: now, the irrepressible Shirley Valentine won’t leave her.