Is our current culture really being choked out by political correctness? 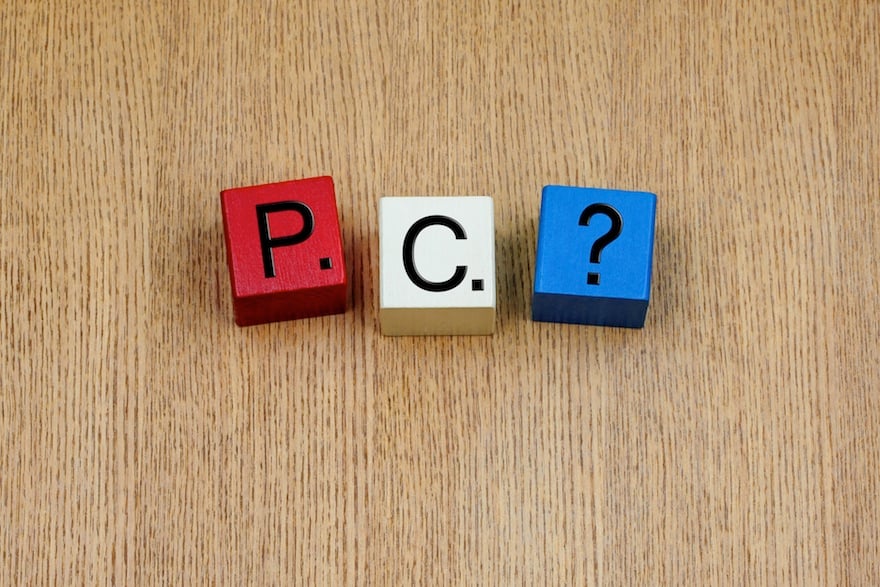 Someday your grandchildren, or other people’s grandchildren if you don’t have any, will ask you: “Grandparent, when did the Second Great Wave of Political Correctness Backlash begin?” That’s the way children will talk in the future, you see. And you’ll probably tell them it began with this article in New York magazine by contrarian liberal Jonathan Chait. Though a bit scattershot in its targets, lumping together a bunch of different things under the generalized heading of “political correctness,” it said what a lot of people were thinking at the time, and more and more people seem to be coming around to the same way of thinking. Vox, a good barometer of online centre-left conventional wisdom, responded to Chait by publishing an article about how political correctness doesn’t exist, but recently has started publishing articles by liberal professors worried that their students are too intolerant of dissenting ideas. The Laura Kipnis story, about a professor who was investigated for writing an article, seemed to be the tipping point for a number of liberals.

I myself am not sure if anything actually has changed in the last few years, or if it’s really a problem. (In a conservative response to Chait, William Voegeli, editor of the Claremont Review of Books, argues that things never really changed at all.) After all, Kipnis was threatened, but few liberals or even leftists were willing to defend the investigation, and her job is safe. There’s a good case to be made that this PC panic is just a panic. Still, I know I have a feeling that something has changed, and it’s obvious others feel the same way. Feelings aren’t facts, but we have to understand the one before we can figure out the other.

Much of the talk about a renewed PC comes from the elite universities, the same place it did in the ’90s, the period that mainstreamed the term “political correctness” in the first place. Chris Rock said that he won’t play colleges any more because the students are too politically correct, and Rock’s friend Jerry Seinfeld recently said more or less the same thing (and, being a white guy, got more mockery for it, which may be one data point in his favour). But it takes in a lot of stuff beyond the university. The initials “PC” have been applied to Brendan Eich’s removal from the Mozilla board of directors for donating money to an anti-gay-marriage cause; the calls for more “diversity” of colour and gender in video games; articles like this Vox piece on why it would be more inclusive to stop addressing mixed-gender groups as “you guys.”

Taken individually, any of these things seems trivial, a “microaggression,” to use a term that has also been cited as an example of PC-left hegemony. The “diversity” trend, for example, is arguably just our old buddy capitalism in action: with the fragmenting of the pop culture audience, media companies are trying to reach groups they might not have been interested in reaching before. (Adding multiple black characters used to make TV networks terrified that a show would be seen as a “black” show and drive whites away; in the era of Empire, things are different.) So the question is whether all these little anecdotes add up to evidence. Or at least, why do so many of us seem to feel like they add up to something new?

I have three ideas about this, and as a tribute to Vox, I’ll phrase them as bold headlines followed by explanations.

1. The mainstreaming of academic phrases.

Many phrases and concepts that started in academia decades ago have now become much more mainstream thanks to Twitter and Tumblr. And many of them are concepts that are deliberately provocative and lacking in nuance, which is exactly what you want in a classroom setting or an otherwise dull book. The idea that hurtful speech is a form of violence, and terms like “rape culture” and “white privilege,” are meant to shake people up and start a vigorous argument, or just disturb people’s complacency, or give them a word for something they always thought but couldn’t articulate.

But when you take these terms out of the classroom and try to use them in everyday conversation — and online conversation, while it isn’t that, sort of tries to imitate everyday conversation — anger is guaranteed. Many of these terms are generalizations, and they always come off as insults to individuals. The individuals who take offence are then informed that they shouldn’t take it personally, they’re just part of an overall system that they aren’t educated enough to understand. This explanation doesn’t make the conversation any cheerier.

If there’s one thing that’s inspired more thinkpieces than “PC” lately, it’s that people are cynical and depressed about the future. (Tomorrowland failed to turn us all into optimists.) The two are connected, I think. Many people have given up on the idea that anything meaningful is going to improve in many areas. But the realm of culture and language is one realm where victories are still possible. President Obama doesn’t care what the left has to say on foreign policy, but he did adjust his language after he got called out for making a “Special Olympics” joke. Corporations don’t adjust their business practices much, but they are very sensitive to bad PR when it comes to diversity. Getting people to think more critically about their own privilege is one of the few victories that seem achievable these days.

And these victories are not nothing; taboos influence language, language influences behaviour, and it all adds up to create a more open and accepting society than we once lived in. Still, cultural politics tend to get very heated when other issues seem impossible to solve in our lifetimes.

Comedy has not been strangled in its crib by the PC police, but there has been a definite rollback from the comedy of about 10 years ago. Back then (said the old coot), the backlash against ’90s political correctness was such that it was almost politically correct not to be politically correct. For today’s audience — maybe a little less cynical, more into the idea that comedy should be good-natured (remember how much praise a show like Parks & Recreation got for just being so darn nice in its humour) — that kind of thing may fall flatter.

You can see how things have changed if you compare a South Park episode from 10 years ago with a more recent one, because both took on the same topic. In the 2005 episode, “Mr. Garrison’s Fancy New Vagina,” not only does Mr. Garrison proclaim that his reassignment operation has merely turned him into “a man with a mutilated penis,” but other characters keep going to the doctor to turn them into the “tall black man” or dolphin that they believe themselves to be. The comic moral is that men are men, women are women, and no one can be anything else. The recent episode, where Cartman pretends to be transgender so he can use the girls’ bathroom (a lot of South Park episodes have Cartman pretending to have a medical condition, a disability, or psychic powers) makes some fun of the confusion over what a transgender person is and isn’t, but doesn’t leave much doubt that transgender people exist and should be treated with respect. In 10 years, Parker and Stone, two comics who care less about being “PC” than any other in the business, evolved on the issue: maybe because they themselves evolved, maybe because they think their audience did, maybe because their social group did. Who knows?

The point is that comedy does seem to have become a little friendlier, if only because it reached heights of misanthropy in the ’00s. The new status quo is good for “nice” comedians like like Aziz Ansari, or comedians like John Oliver who focus mostly on acceptable targets. And there’ll always be a market for out-and-out nasty comics, who can proudly claim that they’re “not PC.” Things are trickiest for observational comedians or artists, who tend to focus on the world they see without really questioning why it’s that way. Chris Rock’s annoyance about “PC” audiences, for example, probably stems from the fact that he observes society and behaviour the way he sees it, and there’s a certain amount of pressure now to describe the world as it ought to be.

(Even Jerry Seinfeld knows, though, that observational truth isn’t always enough. Take the Seinfeld episode “The Outing,” which is based on a true observation: people like Jerry and George would be horrified at being mistaken for gay. The point of the episode is not that this stigma was right, but merely that it existed. But Seinfeld himself was worried that the episode would come off badly, and didn’t feel comfortable until they added the catchphrase “not that there’s anything wrong with that.” It’s a line that makes fun of the characters’ hypocrisy, but also makes it clear that they at least consider it wrong to be a homophobe, even though their actions don’t match their stated beliefs. If the episode had simply conveyed the existence of a stigma and never questioned it in any way, it wouldn’t have worked for the creators; even though it’s real, reality in itself isn’t always enough in fiction or in comedy.)

From Key Concept 1.3: “Many Europeans developed a belief in white superiority to justify their subjugation of Africans and American Indians, using several different rationales.” Pity the high-school or college student who puts up a hand to contest that anymore. They don’t. They know the Orwellian option now is to stay down.

The writer finds it wrong to teach something that is basically true, and doesn’t like students being told they’re wrong for contesting it. And that, I think, is the danger of “political correctness.” It has its advantages, which is why every society has had its own PC in the form of social taboos, things you are technically free to talk about but socially discouraged from mentioning. Taboos can make us nicer people, and not everything we think is worth saying. It’s just that this can sometimes get us into the habit of saying what should be true, or claiming to believe what we should believe. And that doesn’t always work out so well.