Photo gallery: Beauty and contradictions in our landscapes 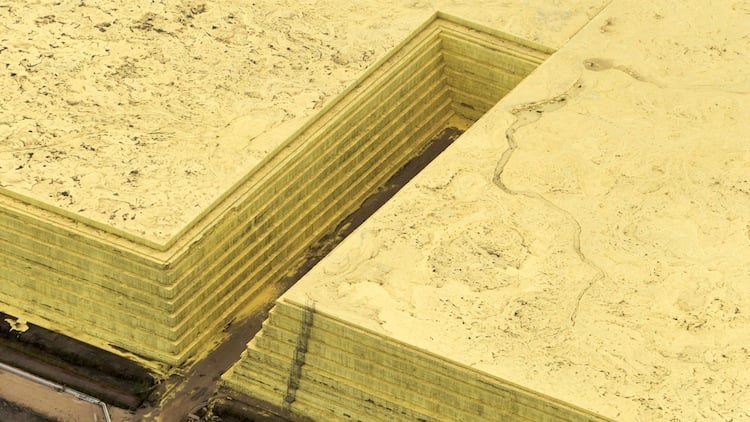 One of several immense sulfur piles adjacent to Syncrude's Mildred Lake upgrading refinery. Bitumen, a low grade heavy oil, is about five per cent sulfur, which is removed as part of the upgrading process to create synthetic crude oil. (Louis Helbig)

It’s one of Louis Helbig’s most vivid childhood memories: flying for the first time in an old antique plane with his father over the tidal flats in Delta, B.C., looking down, and seeing clear through the glassy water. “That was a revelation, because I always saw it from the shoreline and it was opaque, but from a different angle, you could see to the bottom,” he says. “Seeing things from above feels quite natural to me.”

It’s unsurprising, then, that Helbig, now 49, decided to pursue aerial photography, flying his own antique Luscombe plane from coast-to-coast-to-coast to capture some of our most barren and desolate landscapes and turn them into bold, geometric art. His path to the arts was a strange one: Raised in Williams Lake, B.C., he joined, and then quit, Canada’s national ski team (“a bit intellectually limiting”), attended the London School of Economics, and worked in various government offices, most recently in foreign affairs in Ottawa. But what started as a self-taught hobby won him acclaim and buyers and, in 2006, he turned to photography full-time. It’s taken him to controversial places such as the oil sands, where he explores the interplay between the human and natural worlds. His job, he insists, is simply to present the secret beauty and the inherent contradictions in our landscapes. But he admits that objectivity can be a tall task. In this, he points again to his father—a man who lived in an old-growth forest but drove a lumber truck.

“So I’ll go to a place like Fort McMurray, Alta., and I feel the lure of it in the jobs and the intended benefits, and I also feel the natural destruction and the problems that go with that,” he says. “That kind of complexity and contradiction—I find it so much more interesting and informative than simply standing on one corner, saying that this is all just Armageddon, or on another corner saying, ‘This is the best thing for economic prosperity.’ It’s far, far more complex than that.”