Private failure: Nino Ricci on the marriage of Maggie and Pierre

Their relationship seemed the logical completion of the Trudeau myth 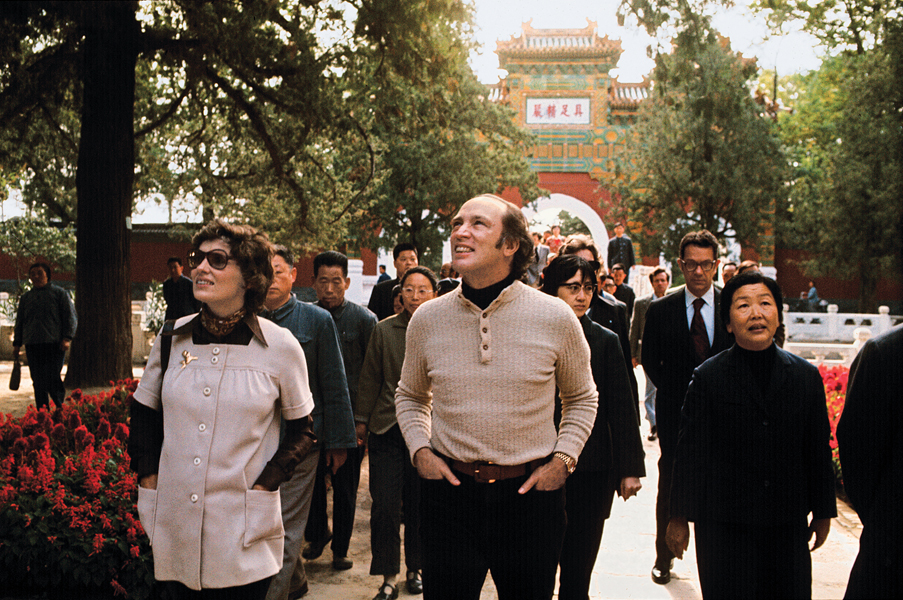 This article was originally published on April 10, 2009

Pierre Elliott Trudeau was Canada’s third-longest serving prime minister. He suspended Canadians’ civil liberties in 1970, and entrenched them in the Constitution in 1982. He was the saviour of national unity for many of us and, for millions of others, the man who brought us closer to the brink than anyone else. But what we all remember best was the fairy-tale marriage and its public disintegration.

Trudeau’s secret marriage to Margaret Sinclair on March 4, 1971, broke many hearts and started a chapter in Trudeau’s life that for some time to come would provide exactly the sort of copy in the international press that Trudeau had always abhorred, even as a part of him seemed to court it. The few short years that the marriage encompassed were in some ways a defining period both for Trudeau himself and for the country. Many people who couldn’t name a single Trudeau policy initiative from the 1970s can still remember what Maggie wore when she met the Queen, or which head of state’s wife she composed a poem for, or what infant child she had with her on the visit to Fidel Castro. By the time of her infamous weekend with the Rolling Stones a mere six years after her marriage, she had left the country with a sense of having forever shed its image as a bad mix of staid Presbyterianism and priest-ridden Catholicism. She had also left Pierre with three sons, two born Christmas Day, who would make him seem in his later years the perfect family man even as he reverted to his days of swinging bachelorhood.

Also on Macleans.ca: The PM for all seasons—Love him or hate him, Pierre Elliott Trudeau symbolized the nation

The daughter of a former Liberal cabinet minister, Margaret had met Trudeau briefly in Tahiti during Christmas 1967. They had discussed Plato then, she said afterwards, though Trudeau had not made much of an impression on her, her attention being taken up with a handsome young Frenchman named Yves. It was not until two years later, when, as prime minister, he showed up in Vancouver and took her out on a date, that she was stricken. What started out as an on-again, off-again dalliance, however, slowly took on the rhythm of an actual relationship.

In Margaret’s version of things, Trudeau never actually proposed, merely put the idea of marriage before her as a matter of negotiation. He set some tasks: she had to prove she could remain faithful, and she had to give up dope. After she had gone several months without a joint or a sexual lapse, the date was set, and on March 5, 1971, the country learned, with some giddiness, that their perpetual-bachelor prime minister had tied the knot.

Margaret’s later contention that Pierre was reluctant to marry her because he thought she would leave him has the ring of truth: for all the image of Trudeau as someone afraid to commit, in the few great romances of his life it had always been the woman who had ended the relationship. The most striking aspect of the young Margaret Sinclair in that context was how woefully unqualified—aside from her looks—she was for the role. She was a mere 19 when Trudeau met her in Tahiti, and only 22 to his 51 when he married her. And apart from an undergraduate degree from Simon Fraser University, where she had studied political science, sociology, and anthropology, she had few of the accomplishments and none of the refinements that Trudeau had previously favoured.

And what was it in Margaret that was to capture the world’s attention so? We watched her because she seemed so unlikely; because we feared and hoped for some gaffe; because we did not know—and it seemed often enough that she herself did not know—what she would do next. We watched her because the camera loved her. The media made her, as it had made Trudeau: just as with him, there were iconic images of Margaret that would be etched in the Canadian psyche. Margaret in her white wedding garb on the cover of Time. Margaret and Pierre swinging Sacha through an airport corridor. Margaret with the Queen. Margaret with Castro. Margaret with Justin, then Sacha, then Micha.

Just as the media had made her, however, so it unmade her. Partying all night with the Rolling Stones in Toronto. Dancing at Studio 54 while her husband went down to defeat at the polls. A famous photo of Margaret caught pantyless seemed the nadir, but there was more to come, as she launched a B-movie career that included a bodice-ripper whose script was written by a gynecologist. By then Margaret had begun to seem a grotesque inversion of Trudeau: where he had put walls, she had put windows, injudiciously baring herself to a world that was all too happy to take whatever she offered.

The real story of Maggie and Pierre, however, was not particularly glamorous or remarkable. Much of it we know through Margaret’s own books, Beyond Reason and Consequences, which were considered in bad taste when they came out but were actually a model of discretion with regard to Trudeau himself. No revelations of bedroom quirks or of some monster or petty tyrant who lurked behind the charm, no bitter recriminations or flinging of blame. On the contrary, her comments about Trudeau tended less to soil his public image than to soften it, as they had when she had joined Trudeau on the campaign trail in the election of 1974. Speaking to an audience in Vancouver then, she had called Trudeau “a beautiful guy” who “taught me everything I know about loving.”

There was very little in the books to contradict this image. “Pierre is one of the gentlest of men, a loving father and a very loyal friend,” she wrote of him, taking most of the blame for the failure of the marriage on herself. Trudeau’s own culpability came out mainly as a sort of benign inattentiveness:his holding court entirely in French at a dinner party without realizing that Margaret didn’t speak it; his failure to notice the chilly refusal of the domestic staff at 24 Sussex to relinquish any control of the household to her. In the end her life came apart so spectacularly and so indiscreetly that the public, too, would tend to spare Trudeau any of the blame for the marriage’s failure.

Here was a man, however, who had chosen for his wife someone 30 years his junior and who shared none of his accomplishments or learning or experience. It was not as if he lacked options. Why choose Margaret over someone like his long-time “companion” Madeleine Gobeil, who was still living in Ottawa when he was secretly dating Margaret and who was someone much more suited to him in age and accomplishments than Margaret was? Though the marriage was seen as another example of Trudeau’s bucking of convention, the truth was likely much different. In Consequences, in a tone slightly less genial than that of her first book, Margaret described the three categories women fell into for Trudeau. There were his female colleagues, and these he saw only as working companions and not as women, though many were also close friends. “Then there were possible dates and here, like Edward VIII, he preferred actresses and starlets, glamorous women perfect for flirtations and candlelight dinners. Then there was his wife, and she had to be dependent, at home, and available.”

Margaret might have added “pregnant,” which she was for almost half of her marriage to Trudeau. Trudeau had always wanted children, and he had always been envious of friends who had married at the proper age and had growing broods while he was still living at home like an adolescent. His earlier relationships had failed not so much because of his aversion to the strictures of domestic life but exactly because he had been attracted to women of accomplishment who had much less traditional views of women’s roles than he had. For all the emphasis throughout his life on human rights, Trudeau never showed himself to be much of a feminist.

No one was ever to suggest he married Margaret for anything other than love, yet there was something coldly practical in the arrangement—in his putting the idea of marriage forward as if he were presenting a government white paper; in his setting of tasks. It was as though the independence and accomplishment that stimulated him in a lover he could not have accepted in a wife. Apparently the man who sought challenges in every other sphere of his life did not want to feel challenged in his marriage. In the end, Margaret proved one of his largest challenges, and one of the few at which he would fail.

That was part of the public’s fascination with the saga of Maggie and Pierre. Part of the fascination in Canada, of course, was the fascination itself: that the world’s eyes should be upon us, that suddenly this backwater nation made the pages of People magazine and Variety and the British tabloids. Beyond that, their relationship seemed the logical completion of the Trudeau myth, embodying socially what Trudeau had seemed to embody politically. Youth, surely, which was a perpetual theme with him, but also the fairy-tale kingdom, the successful quest, the grail brought back that would restore the land. Like Trudeau’s pirouette behind the Queen or his sandals in the House of Commons, which John Diefenbaker, epitome of the Old Guard, had muttered and fumed over, Maggie was a sign of the passing of the old order, the fusty colonial one of the Family Compact and the Union Jack.

It was uncanny how much the later story of Princess Di came to mirror that of Margaret. Plucked from relative obscurity, married at 20, the darling of the camera who, however, could not quite seem to get things right. Another fairy-tale marriage that went badly wrong—and for similar reasons. In the Canadian way, however, Maggie and Pierre ended rather less tragically and less bitterly.

Margaret’s comments about Trudeau’s actresses and starlets were to hold truer for his post-Margaret era than they did for his pre-Margaret one. The old pattern of long-distance relationships was there, but it was much more conscious now. In some ways Trudeau truly became the playboy he had only feigned to be when he was younger, though the image never detracted from that of being a consummate father to his boys. As for his philandering, there would be many women who would attest to it, shocked to find a counterpart leaving by the back door as they came in through the front, but few who would abandon him for it. Women stayed in his life for years, well after relationships had ended; there might be bitternesses, but never ill wishes.