Prog rock: In praise of a much-reviled musical genre

Capes, 20-minute songs, gnomes: progressive rock had it all

Novelist Rick Moody must secretly enjoy being a cultural pariah. After taking on Taylor Swift and incensing her legion of fans with an article in The Rumpus earlier this year that compared Swift’s music to “some flattened squirrel on a country road,” he’s come out with a defence of one of rock’s most hated bands: Emerson, Lake and Palmer (ELP). In “Defending the indefensible,” published in Yes Is The Answer, a new book in which marquee writers confess and confront their affection for the much-despised genre of progressive rock, Moody lays out the evidence against ELP. “They toured with an orchestra.” “There was robot imagery.” “They believed in virtuosity.” “Up-to-date equipment!” But he pokes holes in those accusations even as he’s outlining them. Long before he gets to “So why do I like them anyway?” his fondness for the band is quite apparent.

Let the hating begin. ELP are often cited as the reason punk had to happen. After the Beatles and before the Sex Pistols, they, along with Genesis, Yes, King Crimson and Pink Floyd, sold millions of records, topped critics’ polls and ushered in a golden era of prog rock. There were capes, songs about supernatural anaesthetists, a trilogy of albums about a “radio gnome,” and King Arthur on ice—literally, with skating pantomime horses (courtesy of a Rick Wakeman show). Prog virtuosos fused rock, classical, folk, jazz and Renaissance music, and took little from blues. The music couldn’t get more white—or more unfashionable. Twenty-minute songs performed by earnest young men trying to sound like an orchestra, hopping from one instrument to another, or playing several at once: this was large-scale, ambitious music meant to accompany grand lyrics and stage spectacles. Gone was sex, drugs and rock ’n’ roll, replaced by Kubrickian space-outs, Eastern philosophy and walls of synthesizers—or guitars trying to sound like synthesizers.

For decades now, any self-respecting pop music fan has had to keep his (it’s usually his) love of prog under wraps, though a few writers have stealthily mounted campaigns to reintroduce the music in the conversation. Jonathan Coe named his novel The Rotters’ Club after a prog album by Hatfield and the North. Journalist Nick Awde produced a tome on the Mellotron, an instrument featured prominently on many prog albums, including King Crimson’s genre-defining debut, In The Court of the Crimson King.

Prog for years remained the last musical subgenre to be claimed by hipsters. While artists once deemed terminally uncool, such as the Bee Gees, ABBA and Daryl Hall, have had their critical reappraisal—even Paul Williams, who wrote the syrupy Carpenters hit We’ve Only Just Begun, has the most celebrated guest spot on the new, buzzed-about Daft Punk record—prog rock was a frontier too far. The long-running book series for rock snobs, 331/3, featuring writing on culturally significant albums, has devoted exactly one book (so far) out of 86 to a prog record: Aqualung, by Jethro Tull. The average music fan may not even know the term “progressive rock” but knows enough to snicker at the sight of the impressionistic album cover of a vagrant named Aqualung with snot running down his nose.

Now the music is crawling out from under its toadstool in Yes Is The Answer, edited by Tyson Cornell and Marc Weingarten. Cornell, founder of L.A.-based Rare Bird Books and a musician himself, admits the idea of having respectable writers challenge the accepted gospel about prog was far-fetched. “When Marc and I started doing this,” he says, “everybody we talked about it with was just laughing at us. But then people started to tell their stories, and it just unfolded.”

Cornell, a self-confessed “prog nut,” knew others in the publishing world with the same guilty obsession, including his co-editor. Moody had already outed himself by writing an ode to Gentle Giant, a prog favourite, in The Believer. Esquire writer Tom Junod came to them after Weingarten tweeted something about the book; within three days he’d contributed a brilliant and moving piece about early Genesis and Peter Gabriel as the soundtrack to his adolescence. Musician and author Wesley Stace, who performs as John Wesley Harding (after the Bob Dylan record), and wrote the Commonwealth Prize-nominated book Misfortune, contributed a memoir of a resolute folkie who got swept up in prog and still loves it. Stace was introduced to the genre in university by a female friend. “I was a punk and new wave kid and I liked singer-songwriters,” he said in an interview, “and I didn’t like the science-fiction art and everything that came with prog. I was bigoted, but I was teenaged, and it was amazing to discover it later in life.”

The book—a tribute to what Weingarten identifies in the introduction as “prog rock’s grandeur, its mushy mysticism, its blissed-out mystery”—is a high point in a renaissance that’s been building: a reverential 2009 BBC documentary (Prog Britannia), a magazine (Classic Prog), and a growing number of festivals, including Prog Angeles, organized by Cornell and featuring members of Weezer and others. Tastemaking online music journal Pitchfork drops the P-word on an almost weekly basis in describing some impossibly cool band’s music, from metal monsters Mastodon to French electronic duo Justice—an admission, finally, that someone was listening. And there is the full-on revival of the band responsible for  a concept album about hemispheres of the brain: Rush. As Nirvana’s Dave Grohl said in his speech inducting Rush into the Rock and Roll Hall of Fame, “There’s one mystery that eclipses them all: when the f–k did Rush become cool?”

For all this, it’s unlikely prog will get the reappraisal its supporters feel it’s due. The biggest strike against the genre has long been that it’s bloated, corporate, the antithesis of punk—even though in spirit prog may not have been all that far off from punk. They shared a broad political ideology. Henry Cow and the other bands make up “rock in opposition,” a popular subgenre of prog, which, aside from influencing avant-garde jazz musicians over the years, make the Clash look like weekend protesters. King Crimson’s 21st Century Schizoid Man opens with the snarl of, “Nothing he’s got he really needs.” Prog explored dystopian worlds of environmental apocalypse and corporate greed, occasionally with more subtlety and whimsy than punk. And prog rockers were as committed to their outlandish musical vision as punk was to its three chords; far from all being pampered middle-class kids, they too struggled for an audience and money during their formative years. The average punk band just imploded within a few years of forming—they never stuck around long enough to be derided as “dinosaurs.”

But even fans of prog such as the contributors in Yes Is The Answer relegate the music to a thorny nostalgic curiosity or a soundtrack to a pimple-faced, girlfriend-free, mostly male adolescence. Unlike so much rock, prog is not about sex. The whole point was to “sidestep sexuality, not draw attention to it,” as Andrew J. Mellen writes.

It’s easy enough to admit to liking King Crimson or Robert Wyatt, and you are safe saying you like psychedelic music or “Krautrock” (a term of endearment used widely in the music press). These are the kind of names dropped by indie rockers, crate-diggers and critics alike. But prog is equally about Gentle Giant, a band that has a friendly giant for a mascot and is not afraid to indulge in baroque a cappella counterpoint. It includes a substantial number of bands that will forever be too weird or uncool to be part of a revival. Genesis wrote songs about a giant hogweed brought to England by a Victorian explorer, but will most commonly be regarded as the band with Phil Collins in it. France’s Magma, who have been active for more than four decades, sing in their own invented language (Kobaïan, a phonetic system drawn from Slavic and Germanic languages. “French wasn’t expressive enough for the sound of the music I had in my head,” its leader, Christian Vander, told Britain’s Telegraph a few years ago.).

For its fans, of course, that out-there-ness is a huge part of the appeal. At its best, prog was adventurous and inventive and affecting—and it was unapologetically itself. “I think that’s why hearing [Rush’s] Tom Sawyer on the radio hit me as hard as it did,” writes Beth Lisick, one of two female contributors in Yes Is The Answer. “It didn’t feel like a put-on. Even as a kid I sensed that the band’s weirdness was true and that’s what was so creepy and exciting.” 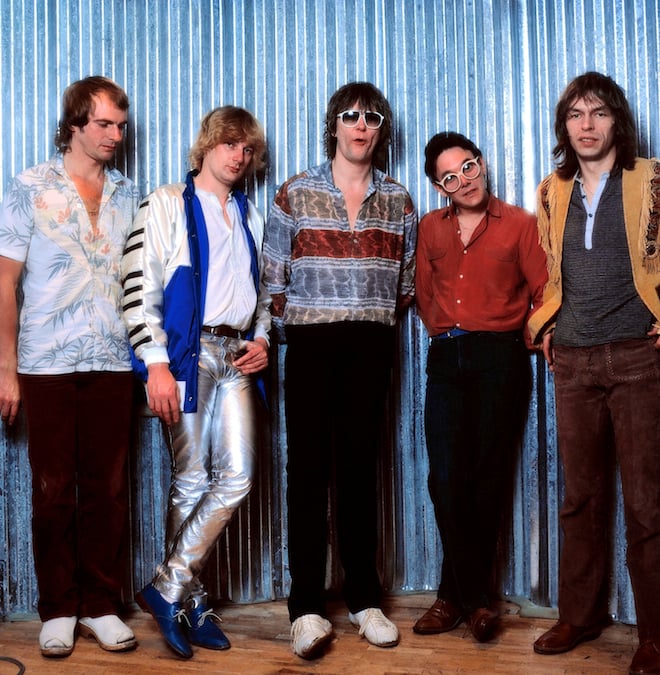