Q&A: In conversation with Arts and Crafts founder Kevin Drew 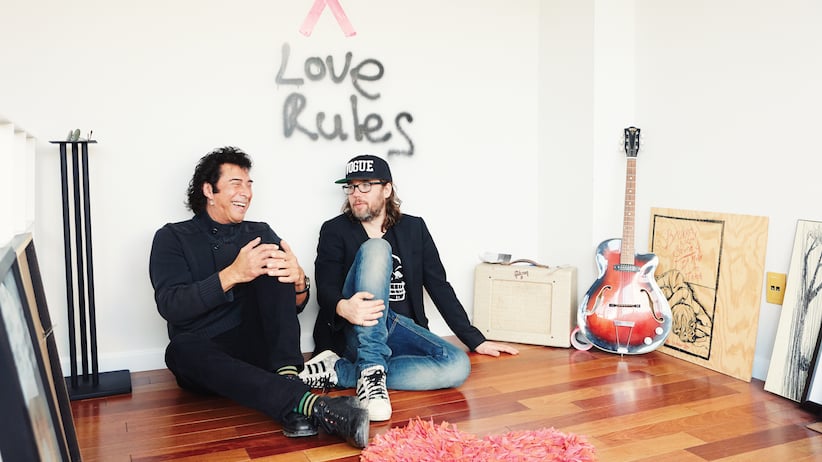 Andy Kim had his first taste of success when he was still a teenager, and wrote the No. 1 single of 1969: Sugar Sugar by the Archies. After he scored another multi-million-selling hit, 1973’s Rock Me Gently, Kim’s luck dried up, and he spent 25 years largely off the map. Kevin Drew started out making ambient, experimental music in the late ’90s, before his band Broken Social Scene swelled in size and became a monstrous rock band featuring multiple guitarists, a brass section and rotating singers that included Feist and Metric’s Emily Haines.

It would be hard to find two men more in love with each other who don’t share bodily fluids. Sitting in Kevin Drew’s Toronto apartment, the musicians claim that each changed the other’s life, and gaze fondly across the table like moony teenagers.

Q: Andy, have you ever had this kind of relationship with anyone else you’ve worked with?

Andy Kim: I’ve worked with Jeff Barry, to whom I owe a lot. He was a superstar writer-producer, from Be My Baby to all the early Neil Diamond things. He was extremely patient with me. Also, he was someone who had a vision and wanted to do it and then left. [After that] I always lied to my parents when I called from New York. They’d ask, “How are you?” “I’m fine! Everything’s great!” But you get lonely. You’re in an environment where it’s safe and comfortable and you’re learning, and then the people are gone. I was on my own. There was something beneath the surface—a huge emptiness. I’m not one to call and say, “Hey, I have a problem. I’m lonely tonight.” Kevin will pick up on that. We’ll be in a crowd of people and he’ll come to me and say, “What’s the problem? Are you okay?” That ability he has to go deep within and break down the walls you build through the years, which I have, is disarming and beautiful.

Q: How did the relationship develop after you first met?

Kevin Drew: I wanted to do something with old tapes of his. I sent him to L.A., but he couldn’t find the tapes. Then I sent him a song [I wrote,] Sister OK [which became the first track on Kim’s upcoming record], thinking, I wonder if he’ll like something like this. He called me and I said, “Well, what if we made a record like this from the ground up, together?” There was a silence, and then, [high-pitched voice] “Really?”

Q: Kevin, you started Broken Social Scene with men who ranged from being a few years older to a decade older than you. You’ve also worked with teenage heroes of yours like Spiral Stairs of Pavement, J Mascis of Dinosaur Jr.. You didn’t grow up listening to Andy Kim. What have you learned from Andy, as opposed to those other heroes?

KD: With Andy, it became this friendship, and then it became this love story. He brought back that teenage feeling about why you want to make music. He could see that I was frustrated and emotionally constipated when it came to thinking about [making music, and that] I wasn’t connected to the magic of it anymore. It had become a day job. He realigned me with that sadness that is the magical burden. He brought me back to being that kid. You don’t know how far you get from yourself. I’m grateful that he came in to stop me before I went any further.

Q: Andy, after you moved to Toronto in 2004 you started casting about the underground for collaborators. What were you looking to do? Where were you at in your life?

AK: All the hits I ever had, they all started in the U.S. Whenever I came to Canada it was just to visit my family. It gave me an opportunity to see that there is a community here. It reminded me of the Brill Building days [the New York City building that housed many of the top songwriters worked from the 1940s to the 1960s], where people were writing and recording together. It was time for me to be a part of a community, and not some guy somewhere in L.A.  who had a lot of hits. My first baby step was to write a song with Ed Robertson of Barenaked Ladies, and Ed said, “Well, you’ve got to record it.” But my recording days were basically done. That was another time, another place. I’m not someone who looks back. I’m not excited about what once was. I’m not interested in talking to people who were in the business from my generation. Those people complain about how much better it was then—it was just different then, you know?

Q: Your new record is very different from Happen Again.

AK: It’s completely different from anything I’ve ever done. To me, whatever plans Kevin had, I was happy to be a part of it. I didn’t know if I could execute [it]; that was my anxiety. I called him up the day we were going to do some vocals, and said, “Can I see you just before?” I said, “Um, I’m scared.” He said, “You should be.” And that made it okay. I wanted to make Kevin proud. I once heard a Brill Building person say, “He who knows how will always work for someone who knows why.” Kevin has both. He knows how and he knows why.

AK: No. I was irrelevant. Kevin told me, “I heard that you retired.” No. I sent records out, you write some songs, and there was always some interest until they found out it was Andy Kim. You get the message that you had your moment, you had your time, you are mortal. I know I’m not the Beatles or Elvis. I was lucky to be a part of a wonderful run.

KD: Creative destruction worked and did not work.

Q: Of course, but there’s something to be said for the willingness to do that in a conservative town like Toronto.

KD: No one had anyone to lose, and the guys who were been there/done that were so sick of what they had done. Everyone just went with it. Leslie [Feist] has always said that she was amazed I was the one bossing around the old guys. She literally thought, “Who is this a–hole? Who does he think he is?”

Q: Earlier, Andy said he doesn’t want to hang around people his own age in the business because all they ever talk about is how good things used to be.

AK: It’s a hurdle all the time. I want to stop the noise and just say, “This is who I am. This is what I’m doing.” And find out what your responsibility is: to be honest in your music and find a way to reach people and connect. Kevin is living each day to its max. He feels so deeply, and he can’t help it.

KD: I don’t want to sometimes. I hate it. I lost it for a few years there. I got angry and sulky and whiny and lost my way. It’s nice to come home to the thought of, “No, people are beautiful.” Andy’s not a part of this world. I love that about him: I can hang out with him and he’s never on his phone. He doesn’t know what the hell Facebook is. I’m striving for simplicity, because I live a very chaotic life. I played emotional pinball for 10 years, it threw my heart and my body and mind all over the map. Every day I’m battling, trying not to feel anxious, because it’s a pattern. I don’t have to feel that way. I know what to do; doing it is the hardest thing.

Q: Is anxiety a big problem for you?

KD: No. It’s just that I feel everything. I became a heavy drinker because it became the only way I could shut down. I win, I fail, I make mistakes, I mess up. I haven’t been the best person. I’ve hurt people. I’ve learned from it and tried to make amends. I’m divorced. Here I am, I live alone. I thought I’d have kids by now. But hey, this is it. I want to go forward.

Q: My favourite title on Andy’s record is Why Can’t I Ever Find My Way. What does that phrase mean to both of you?

AK: To me, no matter where you are there is this emptiness. I don’t know how to fill it. I fill it by being around friends and a bunch of stuff. But there is an emptiness that is very difficult to navigate—it’s not there all the time. I found the way to say it in a song.

KD: A lot of art that is beautiful and inspiring is based around regret. Making peace with your regrets is very comforting. The notion of “Why can’t I ever find my way” is comforting. A lot of time you’re worried that people hold photographs of your worst moments and carry them around with them in a scrapbook. You don’t want to be judged by your worst behaviour, by your mistakes. We’re all getting lost, and it’s all right.