From the archives: Our Q&A with soul queen Sharon Jones, who has died at 60

In 2014, the prison guard-turned-soul singer spoke to Maclean's about her music, her faith, and her fight against pancreatic cancer

Sharon Jones, the 58-year-old firebrand frontwoman of soul purveyors Sharon Jones & The Dap-Kings, has been leaving barriers and bad news in her dust her entire life. Growing up, she was known as the little girl with the big voice, but when she approached record labels, she was told that she “didn’t have the look.” She took odd jobs, including a stint as a prison guard, until she was discovered at the age of 40 by then-fledgling label Daptone Records. Since then, she and the Dap-Kings—perhaps best known as Amy Winehouse’s backing band on her iconic album Back to Black—have released four records, and they planned to put out their fifth, Give the People What They Want, last summer. Finally, at long last, things were coming up Sharon.

But then the album was pushed back from its original summer release date to just last week, because Jones had to face perhaps her biggest obstacle: aggressive pancreatic cancer. In an interview with Maclean’s in Toronto soul-food haunt Harlem Underground, Jones talks about her days as a prison guard, what kept her going in her darkest moments, her biggest fear as she battled cancer, and why she couldn’t listen to any music during her recovery—just three days before she finds out whether she beat the cancer for good.

What made you fall in love with singing?

That’s just something I’ve been doing all my life since I was a little girl. No one thought I’d be a big singer one day—just singing in church, in choir and stuff, in neighbourhood bands. And then when you think you got it and you know you have talent, and someone tells you, ‘You don’t have the look, you’re not what we’re looking for,’ that hurts you a little bit. But I just felt God gave me the gift to sing. It slowed me down a little bit, but that didn’t stop me. Life has its time. Everything in life is meant for you. Thank God I didn’t give up and didn’t sing ever again, I hung in there, and met those guys (Daptone Records).

I never doubted myself, I doubted the industry out here, that they would never accept me. But myself, I was sure. I told them, ‘That’s okay, but one day, people are going to accept me for my voice, not the way I look.”

That job wasn’t meant for me. But it was an experience. I remember—I told the inmates I was a singer, and I told them to lock up, and they told me, ‘we’re not going to lock up until you sing a verse of ‘The Greatest Love” (by Whitney Houston).’ First I was, ‘I’m not gonna sing anything! I think y’all better lock up.’ They said, ‘Nope.’ I said, ‘I’m gonna call the squad!’ They’re gonna come in with the gear, beat ‘em up, put ‘em in the cell. But I think, it doesn’t make sense to go through all that, and all I have to do is sing, so I say, ‘Okay I’ll sing.’

So I sing, and there’s this one inmate, he was a real big guy, and at the end of it all, he would go to the cells, step to the cell, push ‘em in. Go to the next cell, push that guy in, say, ‘Good night, Ms. Jones!’ They kept their word.

How did you find out you were getting sick?

I was getting ready to get back on the road, and once a year I have all of my tests taken, a mammogram—my mother had breast cancer in ’88—and a colonoscopy. Then at show one night, my eyes started turning jaundiced, really yellow. My urine turned brown, the colour of brandy. My stool was like baked chalk. I said, ‘What in the world is going on?’ But thank God I had those tests, because when they removed some polyps, one got stuck on my bile duct and blocked it. So they tried to put a stent in, and they couldn’t, so they tried to open it up and they must have seen something abnormal. They took my gall bladder, they took the head of my pancreas, a foot-and-a-half of my small intestines, and they built me up a bile duct out of my stomach. And then they found the cancer got into my lymph nodes, and they found out it wasn’t bile duct cancer, it was pancreatic cancer stage two, which is a very risky cancer. If I hadn’t had that colonoscopy, I wouldn’t be sitting here today giving this interview because y’all would be celebrating my album saying, ‘yeah, she’s gone, yeah, she was good.’ Pay attention to your body. Check yourself out.

But the show must go on, right?

I did shows when my mother passed away and my brother passed away. I had to perform. Your fans are your fans. What am I going to do? My mother’s going nowhere, she’s going to be right there, I don’t need to sit there and cry my eyeballs out.

Me getting back to my fans made me happy. My management didn’t want me to tell my fans that I had pancreatic cancer. I was like, ‘Are you crazy?’ I said, ‘No, I’m not going to sit here all summer.’ Once I told the fans, they sent me all this stuff telling me how I inspired them and they sent me this positive energy, that gave me the initiative to get out there and do more. 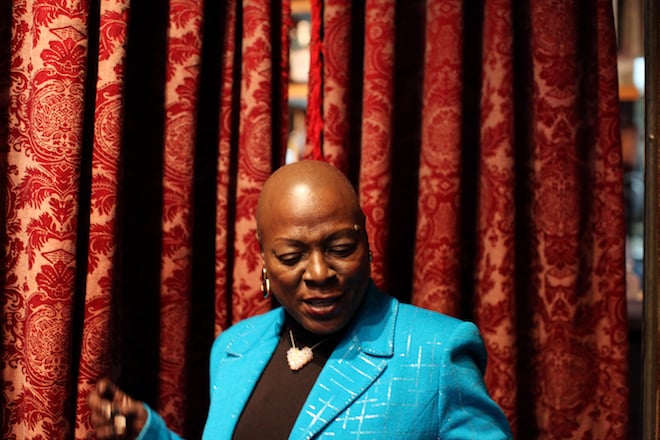 The album was recorded before your diagnosis. Do you feel pressure to write specifically about your cancer now?

I don’t worry. I just have to do what I have to do. When I stop seeing that joy from my fans, and they stop coming to my shows, that’s when I have to retire.

But you’re reading into the lyrics from those songs in a different light now, right?

To me, the main one (like that) is Retreat. It came out in August, and we said, we’ll do an animated video. Sandra, a singer (in the band), she told me, ‘This song is just talking about your cancer. It’s like those little wolves are the cancer, and you’re telling them to retreat, you beat that cancer, you outgrew it and grabbed the mic to say, Hey, I’m back to give the people what they want, some good soul music.” I didn’t even see that. That’s amazing.

As for (second single) Stranger To My Happiness: I’m unhappy, with the baldness and going in there (for treatment), and I felt like a stranger. When I was sick, all those months, I didn’t listen to any music. I couldn’t. Music is my happiness, and my happiness was gone.

There’s been such a positive response to your new music video for Stranger to My Happiness, which you shot after your chemo without wearing a wig.

I didn’t want to do that at first! Every time I look at it I’m going to be bald and I’m going to think about my cancer. But then I thought, ‘you know what, I will do it.’ In life, you can’t get mad and you can’t give up. What we need to do more in life is be a leader, not a follower. The reason I decided to do this without a wig (was that) maybe that’s an inspiration to someone going through it. You don’t like the way you look bald-headed, or you’re weak and you don’t think you can get out that bed? This too will pass. You have to be determined.

I don’t know how my energy is going to be at the beginning. It may not be there in the first few months, but it’ll get there. I’m sure my fans will understand. And the newcomers—I’m still gonna give a show. It may not be that powerful, until I get my hair back, and get my little dresses on, but I think the energy will come out in different little ways.

That’s my fear, I have to admit, that’s what I’m afraid of. But you can’t dwell on things. I believe that I’m going to be alright. I may not give 110 per cent like I used to, but I promise I’ll give at least 80. (Laughs) I got faith that this cancer is gone.

This interview has been edited for length.