Rick Ross: The most interesting man in hip hop

He raps badly, has no story or street cred. How did Rick Ross end up at the top? 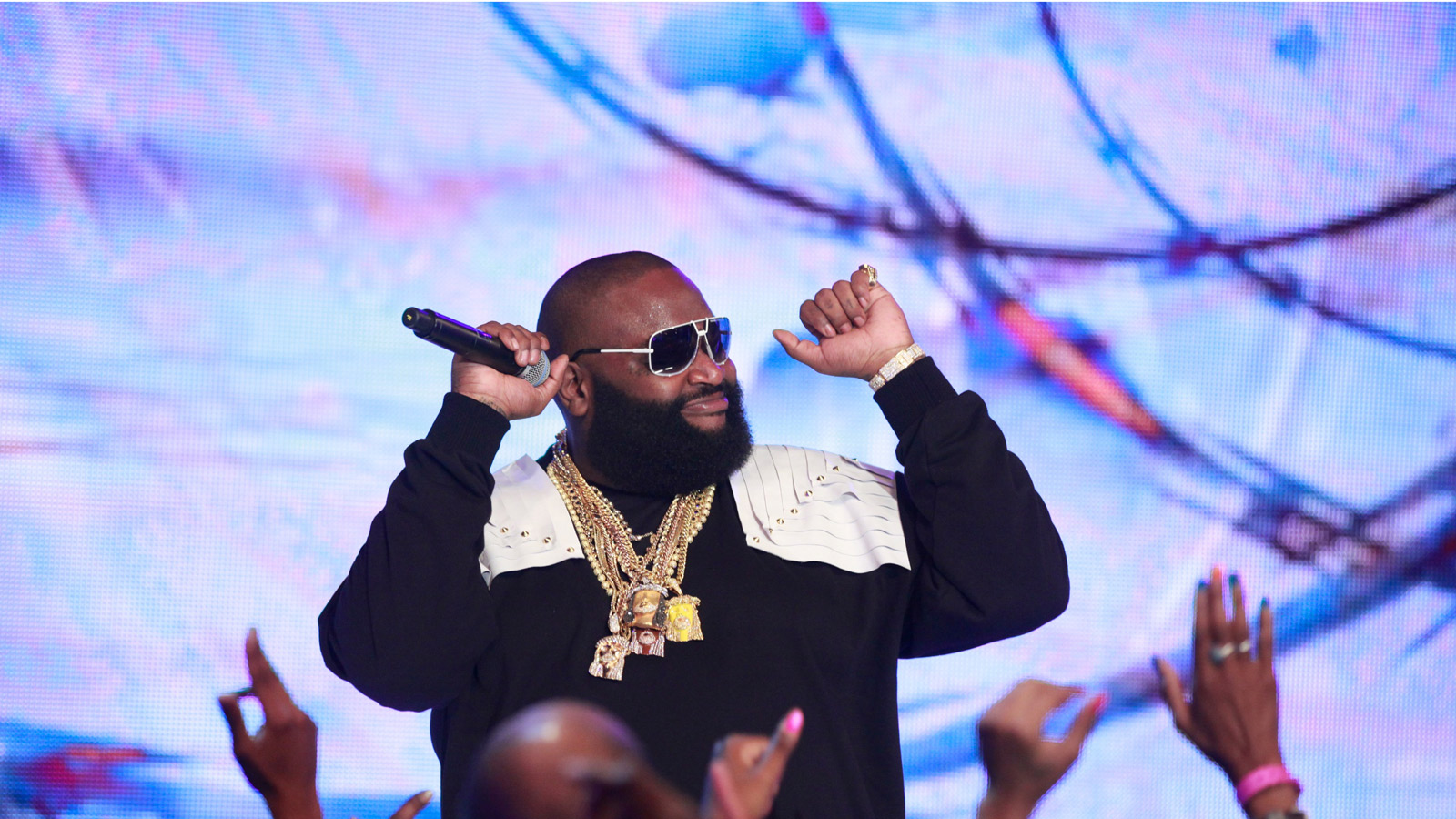 By nearly any traditional metric, Miami rapper Rick Ross—a man who is as weighty in flesh as he is within hip hop—is not very good at rapping. Yet the man born William Leonard Roberts II has established himself as a star despite his molasses-slow flow and the snare-snappy, bass-heavy beats with which he laces his wordplay—such as it is. His songs include “rhymes” such as “Sippin’ on that Remy outside of the club / Got me trippin’ like I’m Remy outside of the club,” and frequently reference chicken wings (he is the owner of a number of Wingstop franchises).

He’s a self-lampooning figure of excess who sports a chain with a diamond-encrusted pendant of his likeness—which is, in turn, wearing a diamond-encrusted pendant of its likeness. He’s dared to trade on the name of “Freeway” Rick Ross, L.A.’s most notorious crack kingpin—even though his songs detail a life of cocaine dealing he may have actually never led. In fact, the revelation he once served as a corrections officer touched off controversy among the genre’s old guard, which believes you must be authentic to what you rap. It was as if the emperor not only had no clothes, but meanwhile was also professing to be a prolific tailor.

While rappers like real-life drug dealer Pusha T give in to introspection, tussling with the morality of their pasts, Rick Ross, the Potemkin drug lord, has simply bulled ahead. Oddly, it’s working. His sixth album, the just-released Mastermind, was the bestselling album in the U.S. the week it came out, giving him the distinction of having the most top-charting solo rap albums since 2006, the year of his debut. He’s supplied haughty verses on songs by the likes of Jay Z, and the label he started, Maybach Music, reels in top rappers. “Rhetorically,” said Michael Jeffries, author of Thug Life: Race, Gender, and the Meaning of Hip-Hop, “he becomes a larger-than-life figure because all of his proteges are broadcasting on every song they do, ‘This guy’s the king.’ ”

By simply acting like a king, he has made himself one—one of his favourite sayings is: “It feels good to be somebody.” And by revealing very little about himself, he’s an enigma who holds all the cards. That’s odd, given modern rap’s shift to the personal and emotional. There’s Jay Z, the fine-art aficionado given to rapping about his wife and daughter; there’s Drake, bemoaning his love life; and Kanye, so madly creative he can’t seem to have a thought without addressing it or tweeting it. Then there’s Ross, his music is the best in triumphant horns and rattling bass that money can buy—and nothing more.

Ross’s popularity makes him the strangest star in a still-young genre, unsure of how to handle its first true generation gap. Precisely when rap music was born is hazy, but historians agree 1979’s recording of Rapper’s Delight marked at least a foal-like first step. What followed, in the ’90s, was a fertile adolescence—the “golden age of hip-hop,” with groups like A Tribe Called Quest and the Wu-Tang Clan, followed by the rise of gangsta rap, with its gunplay and posturing. Through it all, the constant was authenticity—Q-Tip’s peace-loving bona fides and Snoop Dogg’s gangbanging past are inextricable from their careers. But Ross is ﬂourishing amid the uncertainty of rap’s midlife crisis.

“I don’t know if it matters anymore to be legitimately authentic,” said Michael McGuire, a cultural studies professor at Halifax’s Mount Saint Vincent University. “This new generation, they’re not as connected to those rules.” Fewer rappers adopt the thug-gangsta persona, and the Internet has allowed for less skepticism about the ones that do. “Our tolerance for that kind of character has changed,” said Jeffries.

Ross is a reaction, then—not so much to rap’s stodgy elders, but to a time that many of today’s audiences don’t even remember. With his narrative, real or imagined, so fully inhabited, Ross is the perfect boss for his times. He’s a brander nonpareil, a myth-builder who projects an unyielding image in the face of facts. In rap, every star has their thing that makes them great. There’s no one better than Rick Ross at being somebody.