Riverdale's teen chaos is everything Archie should be 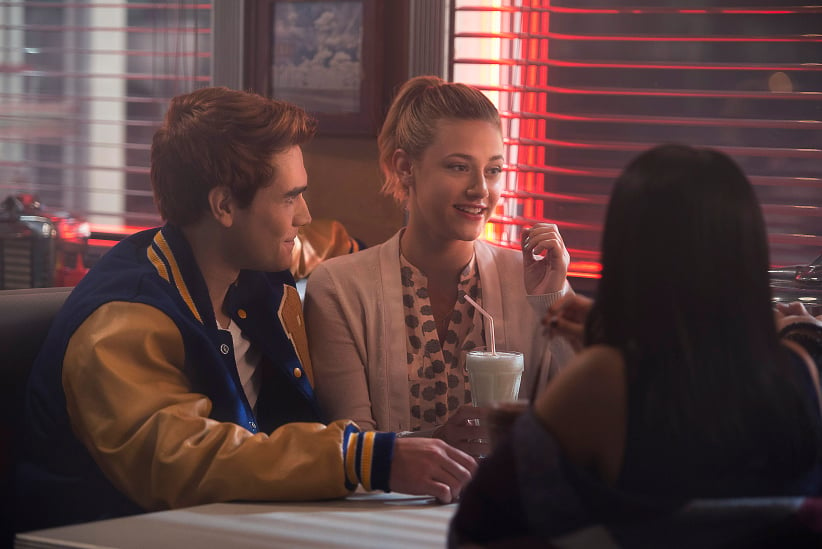 It may be the biggest knock against Riverdale, the guilty pleasure that’s given Archie comics new life among Millennials: the fact that it, well, doesn’t make any sense. The teen drama introduces us to a world in which Jason Blossom, he of the wily Blossom twins, is alleged to have been murdered by someone in Riverdale, while other scandals and dramas ensue. As we witness an innocent town coming to terms with its own darkness, story arcs bend and break with no warning, characters rise and fall within a matter of minutes, and the major characters always seem to gather together for the same melodramatic scenes, as if their lives involve only a desire to follow each other around. But anyone who sees that madness as a bug instead of a feature needs to spend more time in a cottage washroom with nothing else to read.

Flip through any Archie comic, no matter the era, no matter the artist or writer, and one disorienting truth emerges: almost nothing is constant in the Archie universe. The characters maintain their identities and basic physical characteristics across time and space, but they hold on to little else. Anyone who watched The Simpsons can visualize the house at 742 Evergreen Terrace, with its living room and TV room and kitchen and various bedrooms upstairs. The floor plan never changes. Through all the seasons, you know what you’re getting when the Simpsons walk into the house, and there’s comfort in that.

Archie’s life, on the other hand, must be a carnival of horrors. He wakes up in a house that never looks the same. His friends’ houses are all drawn at the whims of different artists’ imaginations. Riverdale’s town grid changes every single day, and even Pop Tate’s Chock’lit Shoppe morphs into different configurations. Just about the only features of Archie’s day-to-day life that offer calming consistency are his cross-hatched carrot top, Betty’s ponytail, and Jughead’s beanie. (And, oddly, the paint scheme along the walls of Riverdale High. For some reason, that green-and-blue decor has survived the ages, a mundane exception to the rule of chaos.)

Riverdale—the place, not the show—is a town in which Archie is either a football star or a bumbling klutz. And where Betty and Veronica are both best friends and fierce rivals. It’s where Jughead once enlisted in a multidimensional crime-fighting force known as the Time Police. And who can forget the magic stool that transported Juggie to another dimension, this one located within the confines of a ’50s diner in which he heroically helped a band of strangers stave off an evil villain named Slimy Sal Monella?

The quaint comics’ infinite possibilities for alternate universes were no mistake. They’re built on the premise that, in Riverdale, nothing is impossible. The genius of our red-headed sometimes-hero “derives from his few defining characteristics,” writes Bart Beaty, a professor of English at the University of Calgary who wrote Twelve-Cent Archie, a critical analysis of the Archie comics era when they sold for that titular fee. “He is actually little more than a cypher—a blank space on which stories are written.” That carte blanche produces “a vessel for all kinds of misadventures,” Beaty observed. Archie’s world “is a machine that can be endlessly reset.”

That explains why Archie once played a superhero, Pureheart the Powerful, and a spy parody in the form of The Man from R.I.V.E.R.D.A.L.E. Two pages after one of those strange tangents, of course, and you’re back to a classic Dan DeCarlo strip in which Archie can’t figure out what to buy his parents for Christmas. He searches for a gift that will “bring them closer together,” and comes up with—get ready for this punchline—a tandem bike. “Are you pedalling back there, Mary? This is a joint effort, you know,” says Archie’s dad. His mom’s reply, and the strip’s kicker: “Keep your eyes on the road, Fred.”

That mind-numbing bit—was it a comment on gender roles in marriage? Or just a bad joke?—represented Archie at its core. The stories were often Seinfeldian—or, as Beaty put it, “finely tuned comics in which nothing significant happened.” Eventually, people stopped buying in. More recently, as sales flagged and those dusty cottage reads aged ever more, Archie HQ decided to add some punch to its plot lines. Remember that time our hero married both Betty and Veronica? And his untimely death in defence of Kevin Keller, the first openly gay character in the Archie canon? And his flirtation with zombiedom?

MORE: The end of Archie? Not so fast.

So the fact that Riverdale makes no real sense actually makes total sense. That Riverdale has managed to keep every character’s bedroom looking the same is either a victory for sanity or a crucial lack of commitment, but either way, no critic who spent their childhoods following Archie’s hijinks—from his days as prehistoric Archie 1 to the hyper-futuristic Archie 3000—should honestly say they expected any better.

Riverdale—the show, not the place—has simply unleashed the next stage of disrupting everything grocery-store devotees thought they knew about the formerly boring lives of Archie and the gang. We learn immediately that Archie is absolutely ripped, a hunk his two-dimensional character could never emulate. Josie is black, as are the rest of the Pussycats. So is Principal Weatherbee, who’s no longer a bald and rotund white guy. Moose Mason, the muscle-bound ignoramus with an anger management problem is—gasp!—now a closeted gay teen who sneaks around with Keller. Dilton Doiley, the boy genius who’s good with gadgets and complex equations, is revealed to fancy a firearm.

No one knows what to expect next. In the typical Archie universe, of course, the stakes are compulsively low and usually consumed by love triangles, petty money problems, football woes, and trouble at school. At first glance, it makes no sense that anyone in sleepy Riverdale would commit murder, and that the whole town would drag itself through a whodunit riddled with inconsistencies and in-your-face sexiness. But Archie has always relied on the unpredictable and the illogical. That’s why the perfect tribute to the comics’ origins would have Riverdale open its second season with a living, breathing Jason Blossom once again wreaking havoc on Archie and the gang.

No one in town would ever recall a parallel world in which Jason had perished. For that beloved gang, and for us, ignorance—as always—would be bliss.