From the Kate-inspired princess complex to Gatsby flapper chic, why the tiara is making a comeback 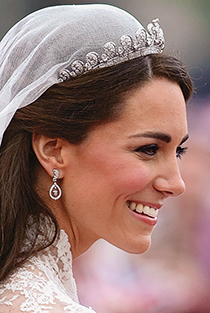 When Princess Madeleine of Sweden married Chris O’Neill last month, royal watchers speculated about the dress and its designer. But nothing seemed to capture the interest of royal fans and fashion obsessives more than the question of which tiara she would wear. Some thought it might be the cameo tiara, used by her older sister and mother at their weddings; others were betting on the dramatic loops of the Connaught. In the end, a spiky fringe tiara won the day, adorned by orange blossoms. The Valentino dress was secondary.

Tiaras may be vestiges of an era when dressing for dinner meant gowns and jewels, yet they continue to inspire more than a few princess fantasies. And they’re gaining fans. Suddenly, there are scores of blogs devoted to them. The satirical fashion gossip site Go Fug Yourself analyzes tiaras worn to events such as the galas celebrating the April investiture of the new king in the Netherlands and last year’s royal wedding in tiny Luxembourg.

And it’s not just royals. On July 1, singer Avril Lavigne, a serial tiara wearer, wore one to marry Nickelback’s Chad Kroeger. Actress Michelle Williams draped a very tiara-like diamond fringe necklace in her hair for the Metropolitan Museum of Art fashion gala in May, while Charlize Theron wore a platinum-and-diamond headband from Cartier to last year’s Golden Globe Awards. “There comes a certain point when you think, ‘What else can I add to this?’ ” says Jessica Morgan of Go Fug Yourself. “And then you stick giant diamonds in it.”

For jewellery historian Diana Scarisbrick, the appeal is simple: “It makes a nobody look like a somebody, and if you’re already a somebody, it confirms your somebodiness.” Worn only to the most special occasions, tiaras have escaped the democratization that hit the luxury trades. Ordinary folk can afford the same dresses and bags that princesses and celebrities wear, but the exclusivity and cost of tiaras put them out of reach. Like peering into Gwyneth Paltrow’s rarefied world through her blog Goop, tiara-watching allows a glimpse behind palace windows and over estate walls.

While most just admire tiaras, a few select aficionados are buying. The $200,000 art deco diamond-and-platinum headpiece Tiffany designed for Baz Luhrmann’s movie The Great Gatsby is the centrepiece of the jewellery company’s current ad campaign. For the first time in its modern history, the 176-year-old firm included a tiara—a $335,000 version made with yellow and white diamonds—in its latest Blue Book catalogue of über-expensive offerings.

Tiffany isn’t alone in promoting new headpieces. The London jeweller Bentley & Skinner is advertising tiaras in Tatler. And in mid-May, Geoffrey Munn, managing director of the London antique firm Wartski, jeweller to Queen Elizabeth II and Prince Charles, saw a full-blown diamond tiara in the window of a luxury shop while walking up New Bond Street. “It’s a sign of a trend,” he declared on the phone from London. “These things cost an enormous amount of money to put together, so if they didn’t think they’d sell it, they sure as hell wouldn’t [make it].” Munn would know. He organized a tiara exhibit in 1997 that proved so popular, the Victoria & Albert Museum later held a blockbuster version, with Munn writing the definitive 432-page book on the subject.

It isn’t just jewels that ratchet up the prices. Creating such an item takes skilled craftsmen “well over a year, depending on the detail required, both in concept and in labour,” notes Wendy Eagan, group vice-president for Tiffany & Co., which is currently creating one featuring sapphires from Montana.

This isn’t the tiara’s first comeback. The predecessors of tiaras were golden wreaths that adorned statues of Greek and Roman gods—and later, nobles, as symbols of success and rank. They fell out of fashion before returning in the neo-classical craze of Napoleonic Europe, this time, encrusted with diamonds and other precious stones. Aristocrats and commoners rich enough to buy their way into society’s rarefied heights used tiaras to mark their place in the pecking order. But inexorably, the number of occasions requiring tiaras shrank as society grew more informal. Even the Queen rarely demands one for a ball, Scarisbrick says. So after the Second World War, tiaras were the first things to be sold off, Munn observes, often for scrap.

The current renaissance started, appropriately enough, at a royal wedding, when Kate Middleton wore a Cartier scroll tiara to marry Prince William in 2011. The trend gathered steam through three seasons of the hit TV show Downton Abbey, as viewers drooled over the jewellery worn by the Crawley women. On the big screen, the interest sparked by The Great Gatsby should intensify when two jewel-laden films are released later this year: Nicole Kidman’s Grace of Monaco and Naomi Watts’s Diana.

Part of the charm is that the tiara sits on top of the head, so generations of craftsmen could create a dizzying array of shapes and heights. It also has a weird practicality. Some versions are “a Meccano set of diamonds,” Munn says. A bride is given one on her wedding day “to answer all her jewellery problems for the rest of her life.” The high, elaborately scrolled tiara bought for Princess Margaret converts into a necklace and 11 brooches and comes with its own screwdriver and mounts. In April, when Queen Máxima of the Netherlands chose a huge diamond-and-sapphire tiara for her husband’s investiture as monarch, eagle-eyed bloggers noticed her sister-in-law had worn the same tiara in its cut-down, all-diamond mode at the previous night’s gala.

For bloggers like Ella Kay, creator of the A Tiara a Day website, the jewellery also allows for “a unique way to look at history, because it’s very female-centric. These are objects that have often been passed down from mothers to daughters.” For example, Sweden’s Crown Princess Victoria often wears steel tiaras, intricately cut to reflect candlelight. Her mother, Queen Silvia, reportedly found the Napoleonic-era pieces hidden away in a palace.

It isn’t easy to find out who is purchasing new tiaras. This is a world steeped in money, and discretion. According to Scarisbrick, many are bought by nouveau money and worn as status symbols at private events, away from the prying, critical eyes of social media.The Middle East is a hot spot. Asia is another, Munn reports. In May, three tiaras were sold at a Christie’s auction in Hong Kong, including a floating double-wing variation that went for $130,000. There are plenty of collectors wanting a piece of history in the form of an antique tiara. A rare Fabergé tiara was scooped up in 2007 by Texas chemical magnates Artie and Dorothy McFerrin for $2 million.

While that tiara will likely never again be placed on a woman’s head, others continue to be worn by those craving extravagance, if only for a day. Actress Scarlett Johansson said she felt like a princess while wearing one to the Oscars a few years ago. A tiara instantly improves posture—imagine slouching when wearing one—and more or less demands a perfect coiffure. Most of all, it has the power to, as Munn notes, transport “a normal, breathing, sentient being into the world of fantasy.” 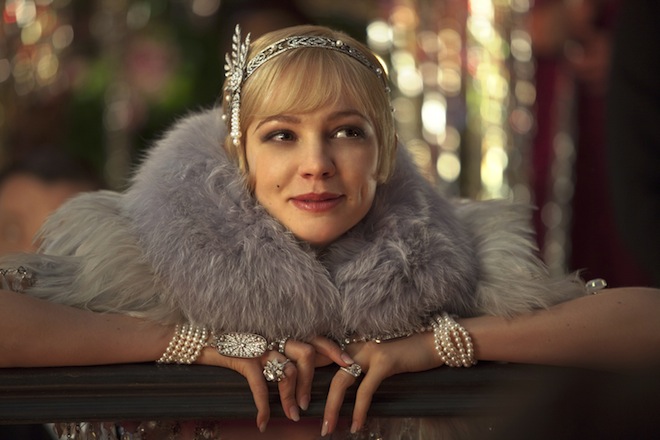 Carey Mulligan stars as Daisy Buchanan in The Great Gatsby.