Roxane Gay: 'I was scared of tackling the history of my body'

In Hunger, Gay tells a powerful, personal story about her struggle to accept herself and come to terms with the brutal aspects of her life 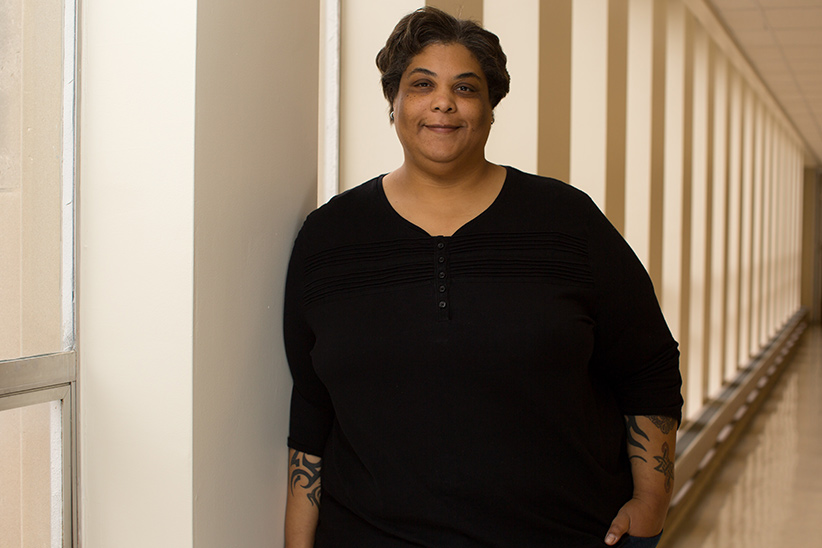 Author Roxane Gay in Coleman hall on the campus of Eastern Illinois University in Charleston, Illinois on January 31, 2014. (Jay Grabiec)

Embedded in a dark corner of the collective psyche is writer Roxane Gay’s horrific account of sexual assault, detailed in her essay “What We Hunger For.” The piece is included in Gay’s bestselling Bad Feminist (2014), which turned the popular critic into a cultural icon. When Gay was 12 years old, she was led into the woods by her boyfriend, then raped by him and a dozen of his friends. She told no one of the brutal attack—not even her doting Haitian parents. Instead, she began to stuff herself with food.

“I knew exactly what I was doing,” says Gay, who teaches English at Purdue University in Indiana and has also written a novel and two short-story collections. “I just thought, ‘I am going to start to eat and I am going to get fat and I am going to be able to protect myself because boys don’t like fat girls.’ ” It’s a subject she explores deeply in her new book, Hunger: A Memoir of (My) Body.

Today, Gay is a literary rock star with a passionate international following. Through Tumblr and especially Twitter, she maintains an active Internet presence. Her essays, which appear in places like The New York Times, Salon and The Guardian, dissect popular culture, race, feminism and gender—occasionally all at once. A brilliant editor, she has influenced scores of up-and-coming talents, including Saeed Jones and Ashley Ford. “An entire generation of writers will likely have Roxane to thank…” Ford says. “That’s a real and true legacy.” Her varied and prolific output is also remarkable. “Roxane Gay has the range,” Jones, BuzzFeed’s executive editor of culture, has said.

Still, Gay has made sexual violence her primary preoccupation as a writer. In her novel An Untamed State, kidnappers grab a woman outside her father’s Haitian estate and subject her to weeks of depravity. Female characters in Difficult Women accept physical cruelty as a relationship norm. For Gay, it’s about acknowledging the pervasiveness of sexual violence and its devastating impact on women.

In Hunger, Gay probes the connection between her sexual trauma and her weight. At six foot three, she has at times approached 600 pounds. Paradoxically, the flesh she accumulated for protection made her a prisoner of her body. Hunger demonstrates how Gay’s weight exacerbated her innate loneliness and social awkwardness, how it intensified her deep desire to belong. “Hunger is about desire, yearning, nourishment and the lack thereof,” she says. “Hunger is always about need.”

The memoir also operates as a kind of manifesto in which Gay declares the obese a marginalized people. She exposes the disdain and discrimination they regularly face. In terms of style, it recalls Joan Didion’s The Year of Magical Thinking, which mixes observation and outrage with grief. Says Gay: “I wrote Hunger because I was scared of tackling the history of my body and in that fear I knew was something worth exploring.”

Gay, now 42, was born into a well-to-do family in Omaha, Nebr. She has written that her childhood was happy, overflowing with love and support. When her parents discovered she liked to invent stories, they bought her a typewriter. They became utterly bewildered, however, as the teenage Gay began to aggressively gain weight. When she was on vacation from elite Phillips Exeter Academy in New Hampshire, they restricted her diet, and she would immediately drop several pounds. But as soon as she received a compliment about her figure, she would pile the weight back on.

At Yale, Gay—who had enrolled in pre-med—ran away with a man she met online. It was a relief to relinquish the role of well-adjusted daughter. It took her parents a year to track her down.

Hunger shows Gay stumbling toward wholeness (she’s not there yet). The first time she teaches a class, she fears the students will ridicule her body. Out to dinner with friends, she is terrified the chair will crack beneath her. Her closet is filled with dreamy dresses she tries but fails to wear. She is afraid to express her femininity.

Pseudo-scientific diagnoses like “morbidly obese” infuriate Gay, as does the reality show My 600- lb Life. She despises the social imperative to control “unruly” female bodies. When it’s suggested that Gay’s success may shield her from the worst of it, she disagrees.

“People talk about my weight no matter what I accomplish. It hurts sometimes, the cruelty people demonstrate against me. People project all kinds of narratives onto my body. In writing the book I wanted to take control over that narrative.”

In Hunger, Gay tells a powerful, personal story about her struggle to accept herself and come to terms with the brutal aspects of her life. Many people would call her a survivor, but she prefers the term “victim.”

“I am not ashamed to use the word,” she says. “It’s not the whole of who I am. But it is important to acknowledge that I’ve been through something. I am comfortable with acknowledging the thing that happened.”